A Look Back: Scientist Dedicates Career to Sea Turtles in Hawai‘i 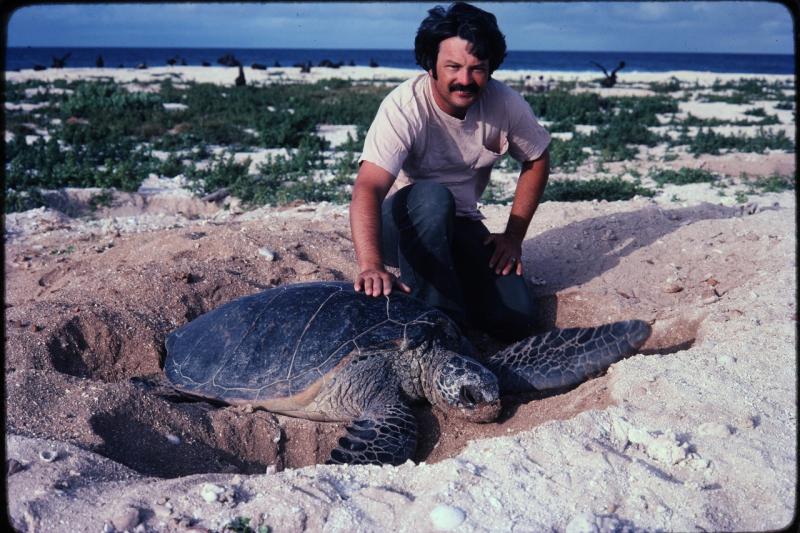 George Balazs with a nesting green turtle in the French Frigate Shoals in the 1970s. Credit: George Balazs.

After 48 years studying green sea turtles in Hawai‘i (known as “honu” in the Hawaiian language), George Balazs, Hawai‘i Senior Sea Turtle Scientist at NOAA’s Pacific Islands Fisheries Science Center, recently retired from NOAA service—but not from sea turtle research. Learn more about his work and how life in the Hawaiian Islands has changed for green turtles since the late 1960s. 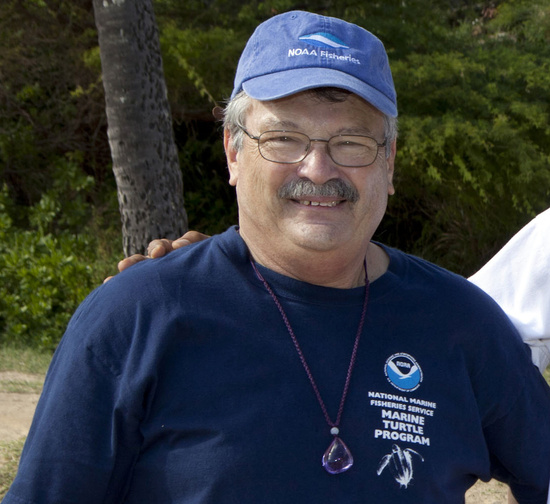 Let’s start at the beginning. What piqued your interest in sea turtle conservation research?
I became interested in sea turtle conservation research during my first years in Hawai‘i. In 1969, I witnessed commercial turtle fishermen unloading a boat full of live green turtles and loading them up, handling them very roughly, into the back of a pickup truck. It was tough to watch. It really affected me and I worried that this level of harvesting wasn’t sustainable. I later applied for grant money to inventory nesting female turtles at their main breeding site, French Frigate Shoals, a wildlife sanctuary atoll about 500 miles northwest of Honolulu (now part of the Papahānaumokuākea Marine National Monument).
What is so special about these turtles? 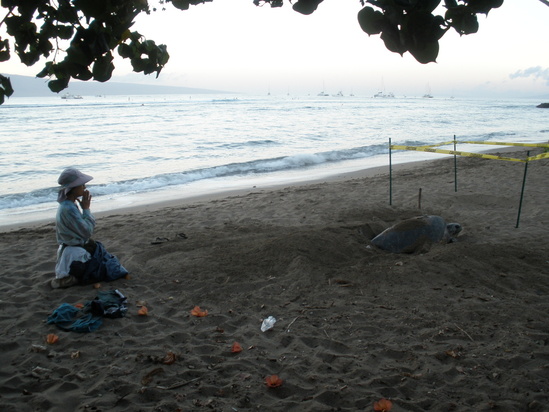 A woman prays to a green turtle for blessings in Hawai’i. Credit: George Balazs.

I think one of the things that makes them so special is their tie to local, ancient culture. Many island native cultures admire these animals because they believe they’re endowed with supernatural traits. And they are a mysterious animal if you think about it—they’re one of the oldest creatures on Earth, they dive deep but breathe air, they swim hundreds of miles to their nesting grounds, disappearing and then returning. Some believe that these turtles are actually our ancestors, returning to us.

Step out of your scientist role and step into your subject’s point of view. What did the world look like to green turtles in Hawai‘i when you started studying them?

Back then, turtles were afraid of humans, and for good reason. In the 1970s, a turtle was a hundred-dollar bill, greatly valued for their meat. Turtle soup, stew, and steak were popular menu items in Hawaii, including for tourists. When I first inventoried Hawaii’s nesting female green turtles in the summer of 1973, their numbers were woefully low. There were only 67 at their main breeding site, clearly not enough for the species to survive much longer in the Hawaiian Islands at the rate they were being overharvested. 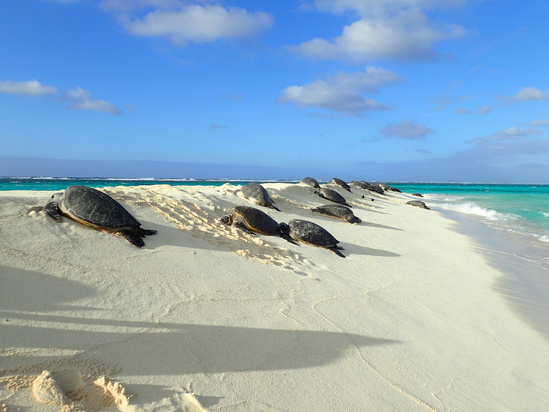 What did you do to try to change the situation?

I gave talks to the public and to the State of Hawai‘i policymakers to increase awareness about the situation. I asked them to consider a ban on the commercialization of turtles and, after seeing my data they agreed. I continued to research and educate, and in 1978 the U.S. Fish and Wildlife Service classified the Hawaiian green sea turtle as threatened under the Endangered Species Act. This meant that killing a turtle became a federal offense. With these changes the turtles started to make progress, slowly but steadily.

Fast forwarding 46 years, what does the world look like to them today? 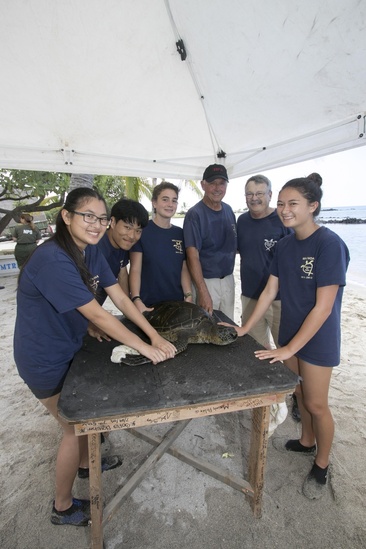 As the turtles began repopulating in coastal waters of the Hawaiian islands, I saw a sociological shift happen; people became more aware of their conservation and began valuing them as “watchable wildlife”—a big tourism draw. The nesting population has grown steadily at about 5 percent per year since 1973. While green turtle populations vary by season, in a recent season the same islet where I counted 67 mothers in 1973 had nearly 900 mothers. The population has really restored itself and grown to healthy numbers and significantly expanded into new foraging habitats. And we’ve learned a lot about them through our research, which continues to support monitoring and protection efforts. We’ve come a long way in our knowledge in 46 years. But the turtles in Hawai‘i, through their resiliency, durability, and survival instincts, have come even farther.

Do you plan to continue focusing on sea turtle conservation? What challenges do you want to focus on?
I’ve studied sea turtles for 48 years—for 35 years at NOAA and for 13 years at other organizations prior to that. But I’m pleased to report that I have not retired from sea turtles. They will continue to be a significant part of my life as an independent global sea turtle scientist and conservationist. Along with several close colleagues, I’ve formed a nonprofit consortium whose purpose is to provide advice, information, and assistance without charge on sea turtles and their conservation. In this way, we hope to better share what researchers have learned in the Hawaiian Islands over many decades. We will also continue to advocate sensibly for Hawaii’s sea turtles and the Hawaiian people and culture so intimately linked together.

Last updated by Office of Communications on June 24, 2021