Northeast Fisheries Science Center oceanographer Jim Manning has spent more than 35 years studying the ocean. He has sought ways to test ocean circulation models with direct observations and helped others use the data collected for a variety of needs.

Collaborations and partnerships have developed along the way. One of his earliest collaborative projects is the Environmental Monitors on Lobster Traps, or eMOLT. The program was initiated by Manning and the Northeast Fisheries Science Center in 1995, when he handed a fisherman a temperature probe. Since 2001, when it officially began, and to this day about 50 lobstermen have been installing temperature sensors on their traps. The program is now administered by the Gulf of Maine Lobster Foundation.

Through the years, eMOLT has expanded to include other gear types like trawls, scallop dredges, and longlines. It remains devoted to monitoring the physical environment of the Gulf of Maine and Southern New England shelf. More than 100 fishermen along the New England coast have worked with Manning and his colleagues in the center’s Oceans and Climate Branch. Together they have developed low-cost strategies to measure physical conditions, primarily bottom temperature, of interest to them and their livelihoods.

“Our primary goal is to supply fishermen with the latest in low-cost instrumentation so they can maintain continuous time series of physical variables throughout their fishing grounds,” Manning said of eMOLT. 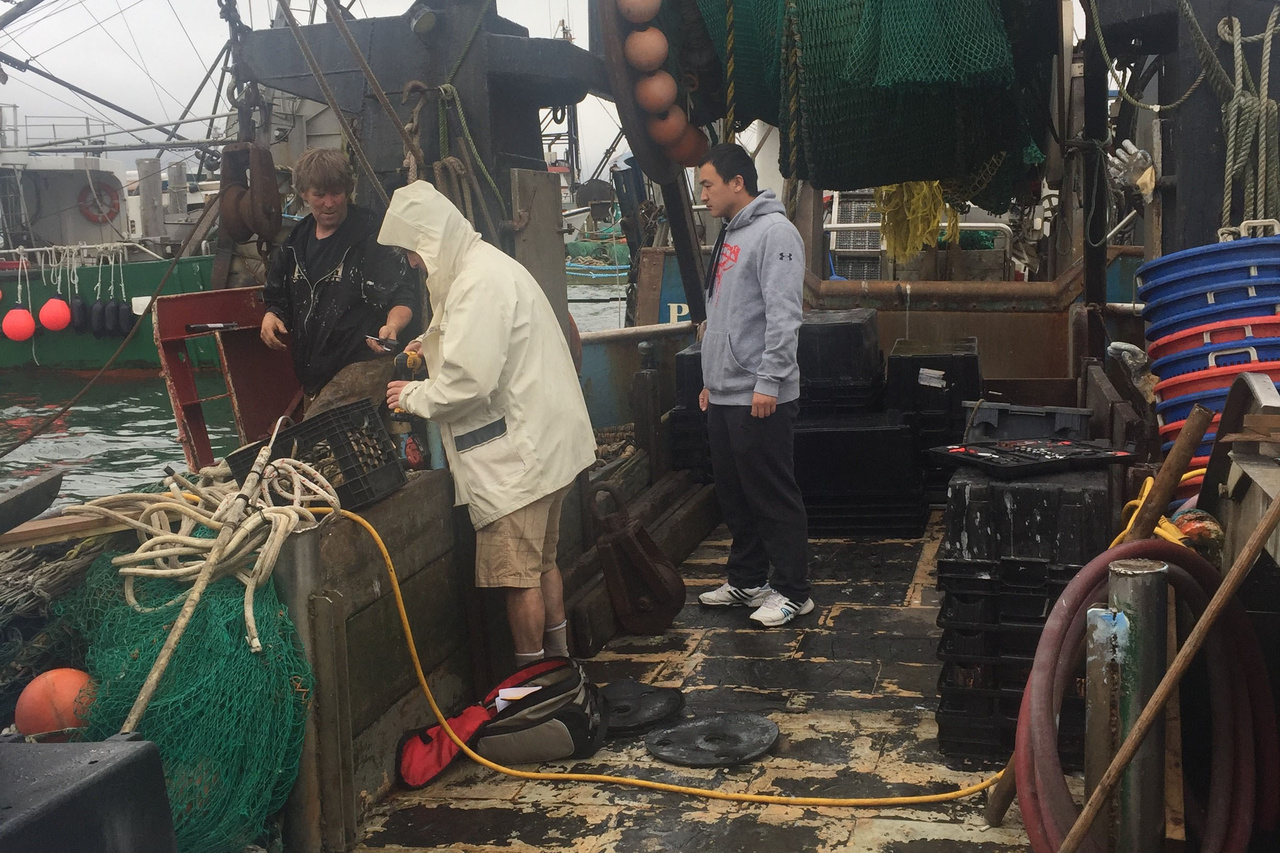 Manning installs a temperature sensor on the net doors of the F/V Linda Marie. Pt. Judith Captain Jon Dougherty is at left, student intern Bingwei Ling in Manning's lab is at right.

Expanding on that idea, he has helped to install temperature sensors on the gear used by fishing vessels participating in the Cooperative Research Branch's Study Fleet. For sampling above the ocean surface, he worked with NOAA's National Weather Service to obtain shipboard weather stations that are now installed aboard regional fishing vessels. He hopes more will follow.

The Long Reach of a Small Program

A hallmark of Manning’s career is his constant attention to finding ways to share data and ideas with others, in order to improve what we know about the ocean.

Manning worked with engineers in the private sector to develop a real-time bottom temperature sensor that can be attached to either fixed or mobile fishing gear. It wirelessly transmits data to a shipboard computer system as the gear is hauled onto the deck. The data collected benefits the fishing vessel as well as local ocean circulation modelers who need to validate their simulations of changing ocean conditions.

Manning and his collaborators developed a GPS drifter that costs about one-third that of a commercial unit. Used by dozens of universities and research groups, these units have already logged more than 1 million miles of ocean. Manning designed the drifters so middle- and high-school students, teachers, and anyone interested can build them from readily available materials.

More than 100 schools have been involved in building and tracking the drifters. He offers building workshops for teachers, has taught students in classrooms, and often helps groups find a way to deploy them out at sea. More eco-friendly materials have been introduced over time. 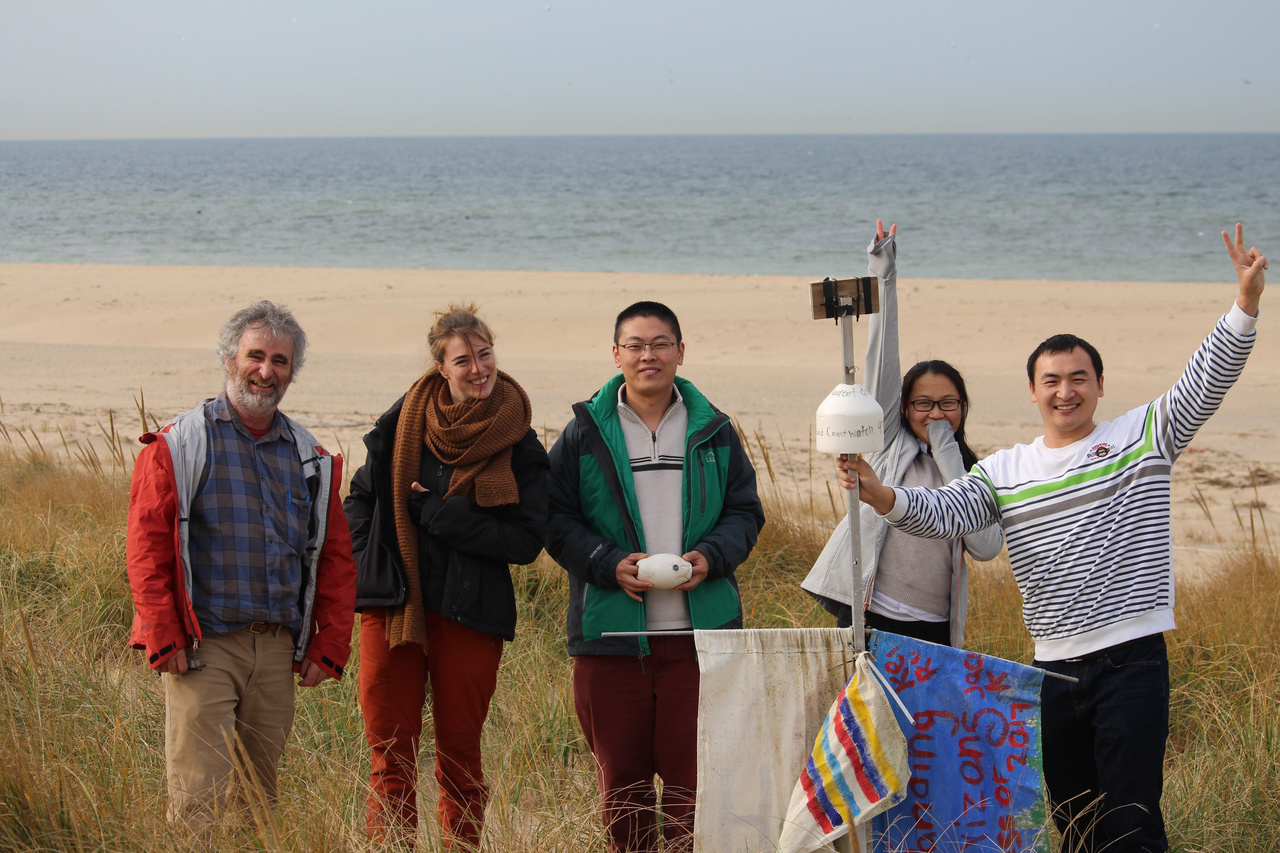 Jim Manning (far left) and interns after hiking the outer Cape Cod beach in 2016 in search of a surface drifter (pictured) that had come ashore.

One of his most recent projects involved multiple deployments of surface drifters in Cape Cod Bay to help map the current fields affecting cold-stunned sea turtles. Each fall the turtles, mostly Kemp’s ridley, are found washed up along the bay when the waters turn suddenly cold. In collaboration with Massachusetts Audubon, Manning and center colleagues teamed with high school students who made the drifters. These drifters were deployed in the bay by local fishermen. Bottom temperatures obtained by the fishermen are also used in the study.

Miniboats from Educational Passages in Maine have been another unique data gathering platform and source of collaboration. The organization was founded by sailor Dick Baldwin in 2008 to educate students about ocean sciences. It works with students and teachers in many states to build and launch the 5-foot-long mini-sailboats customized and named by the school. 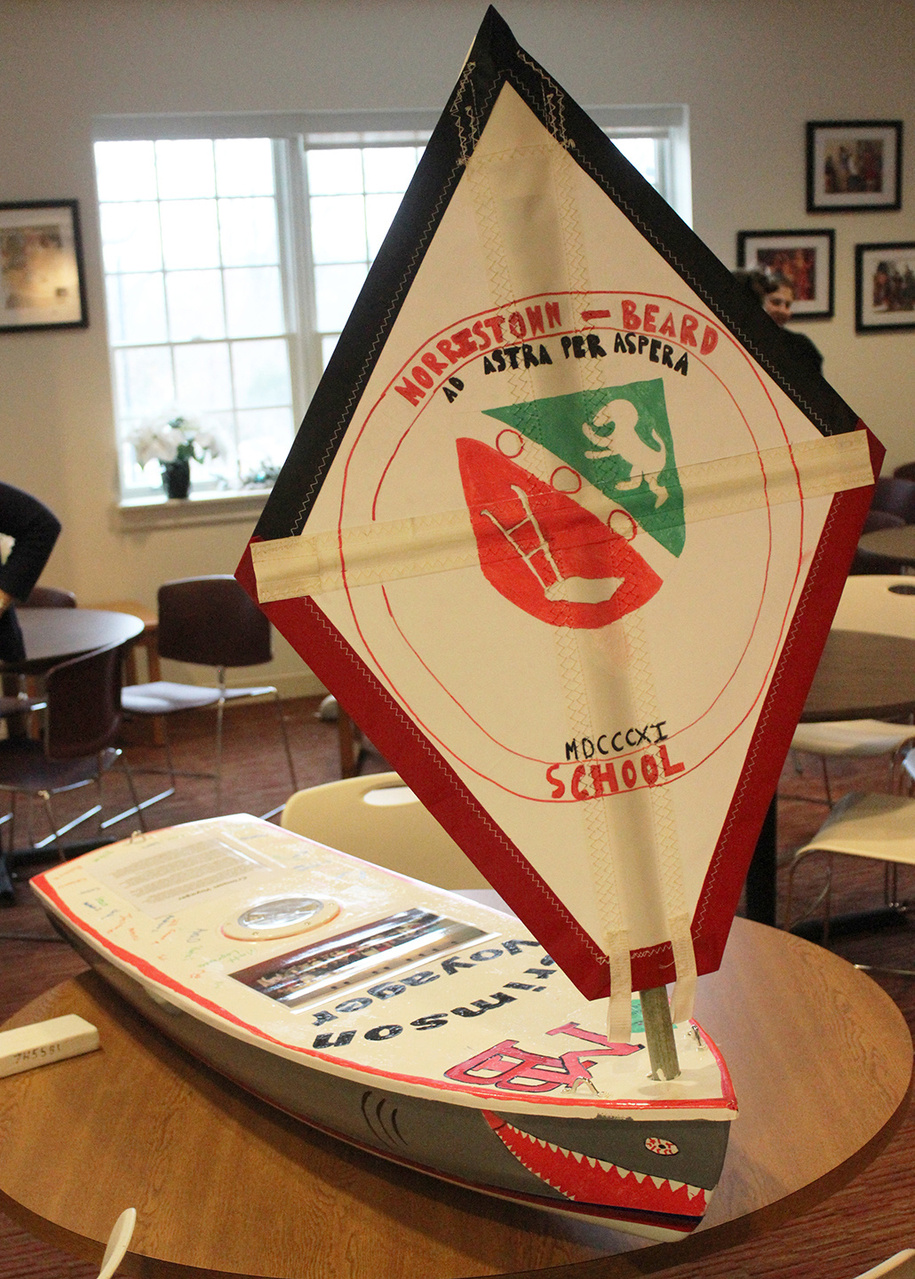 Crimson Voyager, built by students at the Morristown Beard School in Morristown, New Jersey, was first launched in December 2015 and has made four voyages to date. The miniboat is currently at a school in Portugal being repaired and repainted, and will hopefully make another voyage.

The miniboats are equipped with GPS units and some now have sensor packages Manning and colleagues have engineered to gather air and water temperatures. Students track the course of their vessel  and learn about navigation, oceanography, geography, and other sciences in the process. They also interact with other students and cultures across an ocean who find and relaunch the miniboats that often land on their coast.

The center's Orono, Maine --based salmon researchers saw the potential in the miniboats nearly a decade ago to expand their salmon migration telemetry coverage beyond the Gulf of Maine. Manning helped make it happen. Two miniboats equipped with GPS units and ultrasonic receivers to detect tagged salmon smolts were launched in 2012.

All of these devices require tracking. Manning expanded his website and made it accessible to the public so anyone can follow the progress of the miniboats or drifters. He makes improvements, recently adding sensor packages to the miniboats that report hourly sea-surface and air temperatures instead of less frequent observations.

Others share his interests and will continue the work. Erin Pelletier, Manning’s colleague at the Gulf of Maine Lobster Foundation, has helped administer much of the program from the beginning and continues in that role. Fellow physical oceanographer Vitalii Sheremet has worked in Manning’s lab for more than a decade and helped develop a low cost current meter. More recently, Cassie Stymiest, new executive director of Educational Passages, has joined the team.

A Passion for Data Science

He joined the Northeast Fisheries Science Center staff in 1987. “It seemed to be the best combination of applied math and oceanography,” he said. “Plus, my wife Robin’s family are Cape Codders.” 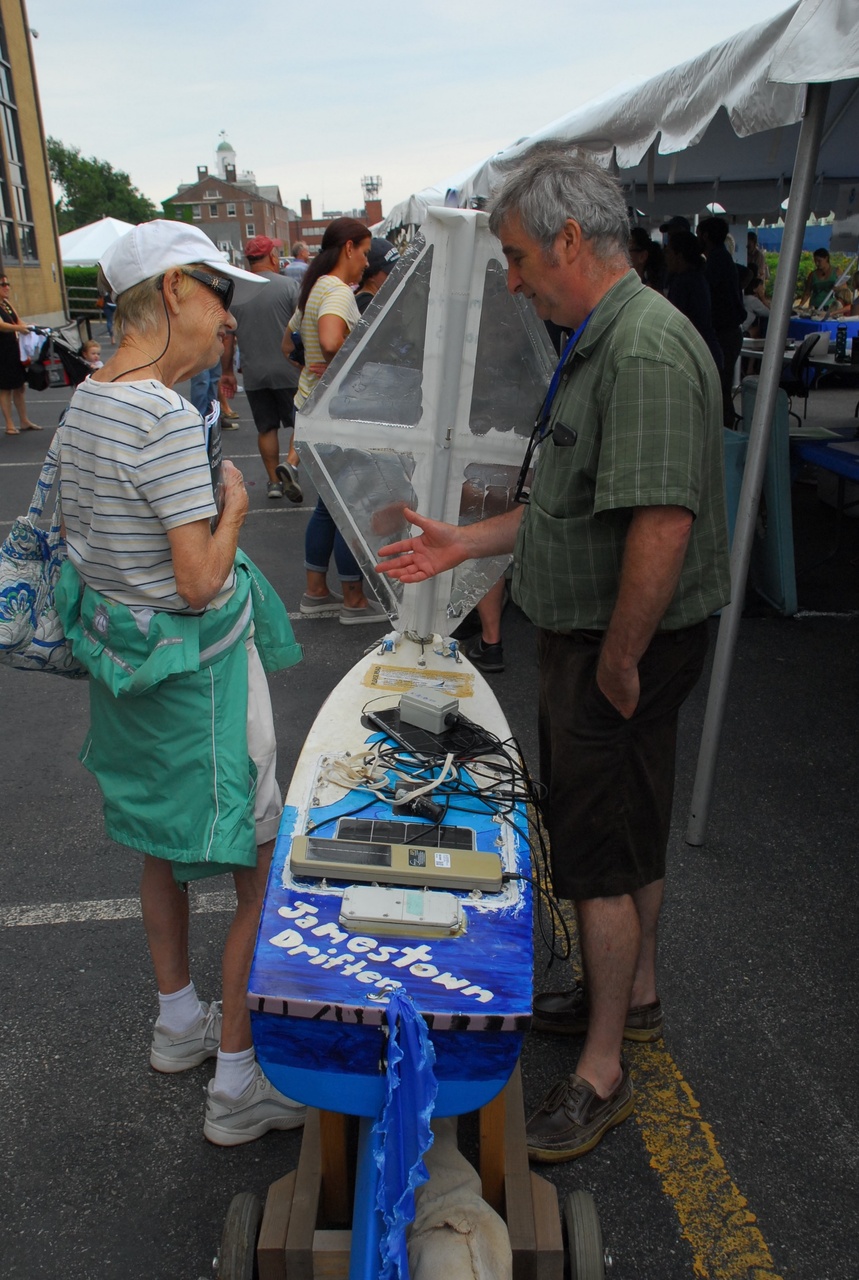 Jim Manning speaks with a visitor about oceanographic data collection and education using miniboats and drifters at the 2018 Woods Hole Science Stroll.

He admits to having too many partnerships to list, all of them rewarding. “I really like data science, the task of distilling and visualizing gigabytes of numbers, depicting what is important in simple graphics. Visualizing the data helps people understand what is happening in the ocean. Being involved in the data collection can make it even more meaningful and real.”

He also likes sharing his passion with students, and has mentored both undergraduate and graduate students. More than a dozen undergraduates from U.S. universities have joined his lab as summer interns in just the past decade. The Shandong University of Science and Technology in China has sent a few dozen of their best graduate students to his lab for year-long internships. One of the students, Huanxin Xu, has been in the lab for ten years, knows nearly every line of code, and will hopefully help maintain the projects in the future.

“I like working with a variety of people including fishermen, ocean modelers, teachers, and students. Fishermen, especially, are interested in physical oceanography,” Manning said. “I like maintaining multi-decadal time series of environmental data in hopes that fishermen will be able to show their grandchildren the plots.”