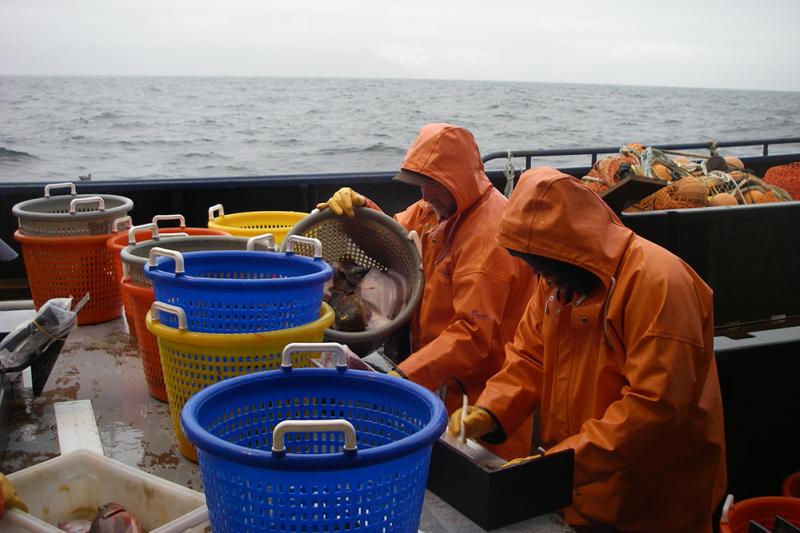 The cold waters of the eastern Bering Sea support some of the world’s largest and best-managed commercial fisheries. Sustainable management of these fisheries is founded on scientific information provided by Alaska Fisheries Science Center groundfish surveys. New collaborative research is providing information to ensure accurate local estimates of fish abundance in a changing Bering Sea.

Recent rapid, large-scale movements of fish driven by unprecedented warming in the Bering Sea have created a challenge for survey scientists. As fish populations track their preferred conditions, they are shifting northward and westward, likely beyond historical survey boundaries.

“To maintain sustainable fisheries, managers need to understand how climate is influencing how many fish there are and where they are. As fish populations shift in response to changing ocean conditions, we need to adapt and expand our surveys to provide accurate information that represents the entire population,” said Cecilia O’Leary, NOAA Fisheries biologist, Alaska Fisheries Science Center.

A team of scientists led by O’Leary wanted to see if they could use that overlap to combine information from the U.S. and Russian surveys.

The scientists combined estimates of local abundance from the northern, eastern, and western Bering Sea. They estimated the proportion of fish biomass within the extent of the historical survey footprint—known as ”availability.” They used Alaska pollock (also known as walleye pollock), Pacific cod, and Alaska plaice as case studies to calculate survey efficiency.

The team used historical local abundance estimates from Russian and U.S. surveys that occurred in close proximity to each other in the eastern Bering Sea to calibrate one survey to the other. Once calibrated, they calculated a biomass index for all three Bering Sea regions.

“This is the first study that we know of to combine existing Russian and U.S. estimates  across the Bering Sea to assess changes in the availability of groundfish biomass to our survey. Any changes in turn could alter interpretations of our population indices used for regional management,” O’Leary explained.

The approach they are pioneering may have broader applications in other regions where fish stocks cross international boundaries or different management jurisdictions.

“The strength of this approach is that we can use existing surveys. Traditional approaches for combining surveys from different countries require side-by-side experiments,” O’Leary said. “Cooperation among the international scientific community is essential. By sharing and combining information across countries and institutions, we can improve scientific information without additional expense.”

The team found a decline in availability of fish biomass to the eastern Bering Sea survey between 2010 and 2017, the most recent year of survey coverage that included all three Bering Sea regions.

“We are still fine-tuning this methodology—it is not ready to add to stock assessment yet,” O’Leary cautions. “But our findings hold promise for improving how survey data are used for management advice. Collaborating between countries has clearly improved the effectiveness of our surveys providing information on fluctuations in fish availability. That information will help us to produce more accurate survey indices and therefore a higher probability of sustainable management.”

Fine-Tuning and a Multifaceted Approach

The team is currently working on developing this statistical approach to combine data sources further and incorporating other facets of availability.

They are now exploring model-based approaches that can account for the complex responses of fish populations relative to their environment. For example, understanding how fish stocks respond to ocean conditions is important to best interpret survey data and track population trends. The team is now looking at ways to directly account for the influence of ocean conditions on the accuracy of the survey, often described as the "availability" of targeted species to the survey gear.

“This research is a great example of the elaborate and pertinent knowledge we can gain from sharing and combining scientific information among scientists, research centers, and across countries,” O’Leary said.