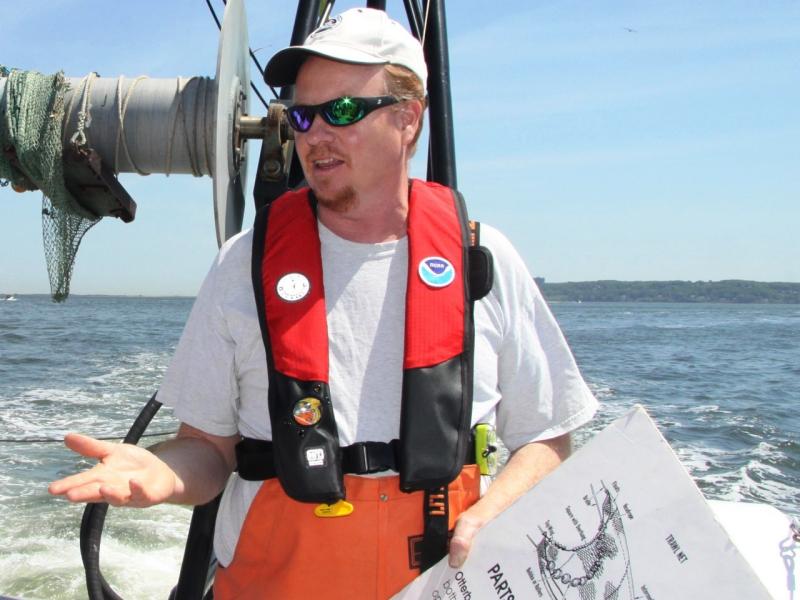 We continue our series to introduce the people who work at the Northeast Fisheries Science Center (NEFSC). Each month we will feature a new "face" from the Center's five laboratory locations - Orono, ME, Woods Hole, MA, Narragansett, RI, Milford, CT, and Sandy Hook, NJ - and share with you a bit about who they are, what they do at the Center, and what they enjoy doing in their spare time.

Although I was born on Staten Island in New York City I grew up in Middletown, NJ, where a growing family of five had more space to evolve. My dad continued to commute back to Staten Island for quite a few years, and I'll always admire him for putting in the time and effort needed to keep his family going. While he was busy taking care of everything a dad needs to do, I went fishing with a childhood friend named Chuck whose mom drove us around to the local freshwater ponds and lakes. Our moms constantly got us confused while calling us home as we both had red hair and looked alike from a distance. My dad was a teacher, and during the summer we would wander the U.S. in our camper. There usually were plenty of freshwater fishing opportunities!

Early in my studies I knew I wanted a career out in nature, but that start was slowed down by my mom's illness. I stayed local and got an associate degree in business management from Brookdale Community College in Middletown, NJ (my mom got to see me graduate). I kept my interest in the sciences and built up quite a library of aquaculture periodicals and books, thinking that I'd use my business skills there someday. I got my job at the Centers's James J. Howard Marine Sciences Laboratory at Sandy Hook, NJ before finishing my education but continued working on it through the years when the opportunity presented itself. I began taking higher level courses at Monmouth University in West Long Branch, NJ, sometimes through the NOAA Undergraduate Studies Program (UAP) and sometimes with my own funding. It took a few years, but through perseverance I attained my Bachelor of Science degree in Interdisciplinary Studies - Marine and Environmental Biology and Policy/Business Administration. I gained many friendships at Monmouth University with the deans, professors and students, and even encouraged a few fellow MU undergrads to join NOAA through volunteering and internships.

Tell us a little about how you came to the Science Center.

One of the courses I took at Brookdale College’s Sandy Hook campus (now closed) was marine biology, where I met an interesting professor by the name of John Manderson, now a research fisheries biologist at the Howard Laboratory at Sandy Hook. John saw that I had some promise. When he took a job at Rutgers University working on the Hudson River he dragged me along for some volunteer experience, which turned into a paid position. Taking a Boston Whaler under a parking garage and scraping sea squirts off fish traps and cages wasn't so glamorous, but we often wondered if the guys in suits on the NY side would rather be where we were (even if sometimes covered in mud!). The Rutgers research program had lab space at the Howard lab, which when I started was in temporary trailers that may not have been grounded properly. I got to know my way around working with the NOAA research staff, and eventually an opportunity opened as a contract hire (John Manderson was involved in that as well). From there I was lucky when a technical position opened, and I was on my way in the NOAA system.

My position is formally known as a Marine Biological Sciences Laboratory Technician. I work in the Fisheries Ecology Branch, part of the Center's Ecosystems & Aquaculture Division, at the Howard Laboratory. I gained my fisheries insight growing up and further tuned my fish whispering abilities while working for what was then called the Behavioral Ecology Branch with research over the years that has involved studying commercially and recreationally important local fish with tagging, predator and prey relationships, spawning behavior, feeding behavior, food choice experiments and migration movements. Anthropomorphism? You bet! Fish can tell you many things if you just watch them enough. I've used all the historical techniques on both big ships where thousands of fish are caught in large nets to hand-hauled plankton nets catching microscopic animals, and I have learned a few lessons over the years through both successes and failures. I'll set up the collection, get the fish in the boat, transport them back to Sandy Hook tanks and keep them alive (and healthy) as long as they're needed.  I'm even friendly to the invertebrates and marine mammals when they need a helping hand!

I think the best part of my position is the ability to help other staff when I have free time.  Being willing and able to help comes in many forms, from the freedom to participate in bottom trawl surveys to my time spent with the Staff Advisory Council where I've learned quite a bit. I find working with the people of NOAA Fisheries rewarding. When people ask me who I am and what I do, l usually reply that I am a steward of the marine environment.

I've gone through some significant life changes recently. Taking long walks on the beach and pondering what life has in store for me next has been a recent hobby, and a house built in 1910 will always need some TLC.