"Over my career I have personally tagged over 11,000 sharks in the Apex Predators Program." 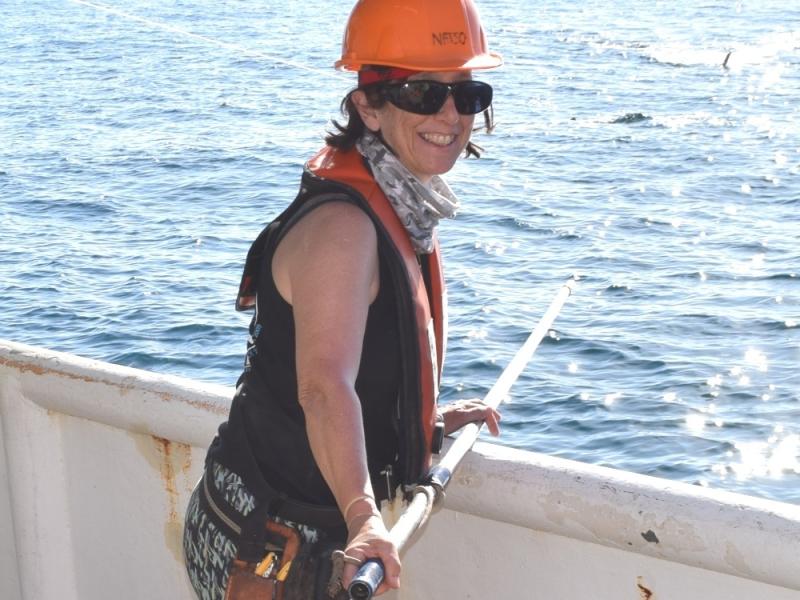 We continue our series to introduce the people who work at the Northeast Fisheries Science Center. Each month we will feature a new "face" from the Center's five laboratory locations - Orono ME, Woods Hole MA, Narragansett RI, Milford CT, and Sandy Hook NJ - and share with you a bit about who they are, what they do at the Center, and what they enjoy doing in their spare time.

I grew up in Northern California in the San Francisco Bay area.

Where did you go to school and what did you get your degrees in?

I went to Occidental College in Los Angeles, California, for my bachelor’s degree because they had a marine program with a student run research vessel. I spent most of my days working on that vessel teaching students about collecting water samples and the biology of the species we caught in while trawling and dredging. During the summer, I was a deckhand and learned how to operate the vessel and its winches and A-frames. I then went to Moss Landing Marine Laboratories, Moss Landing, California, through San Jose State for a master’s degree. I studied the age and reproduction of the Pacific angel shark (Squatina californica). When it came time to pursue a Ph.D., I came to Rhode Island to attend the University of Rhode Island Graduate School of Oceanography due to its proximity to the NOAA Fisheries’ Narragansett Laboratory and the work Jack Casey, chief of the Apex Predators Program, and Wes Pratt, research scientist in the Program, were doing on sharks. They were among the top ten leading shark researchers at the time. Both retired now.

Tell us a little about how you came to work for NOAA Fisheries.

When I came to do my Ph.D., I contacted Jack and Wes about doing a study with them. I spent my Ph.D. volunteering and working in the Program. During that time I processed shark ageing samples, aged sharks, collected age and reproductive data at shark tournaments, and from research and commercial fishing vessels. After I graduated I went to Canada for about 2 years and worked on cod. In 1992, I was able to come back to the Program as a temporary employee and when research scientist Chuck Stillwell retired, I was hired as a federal employee in 1993.

What do you do in the Apex Predators Program?

In the Program we study the life history and movements of sharks. I am a research scientist and my main focus is shark ageing and reproduction. I try to determine shark age at different life stages, when they reproduce, how many young they have, and overall how long they live. I go into the field on research, commercial and recreational vessels and to shark tournaments to collect data. We also collect data on stranded sharks. All of this requires a lot of necropsy work. Once we have enough data on a species, I work up the samples in the lab, computerize the data, and write a paper for publication. Most of our research involves collecting data important for shark management. I also lead a 49 day, biennial research survey of large coastal sharks, collecting species composition, size, and sex data for tracking population numbers. We also tag sharks during the surveys. Over my career I have personally tagged over 11,000 sharks in the Program.

I like the variety of the work, I may be in the lab one day and fishing the next. I also like figuring things out whether in a necropsy or a spreadsheet. For example, determining the reproductive condition during a necropsy or a pattern in data in a spreadsheet that leads to learning something we did not know.

Knitting is probably my primary hobby. It allows me to justify my time watching TV with my dogs.