Robin Peuser works as a Supervisory Program Analyst in NOAA Fisheries' Office of Habitat Conservation. Learn more about her work. 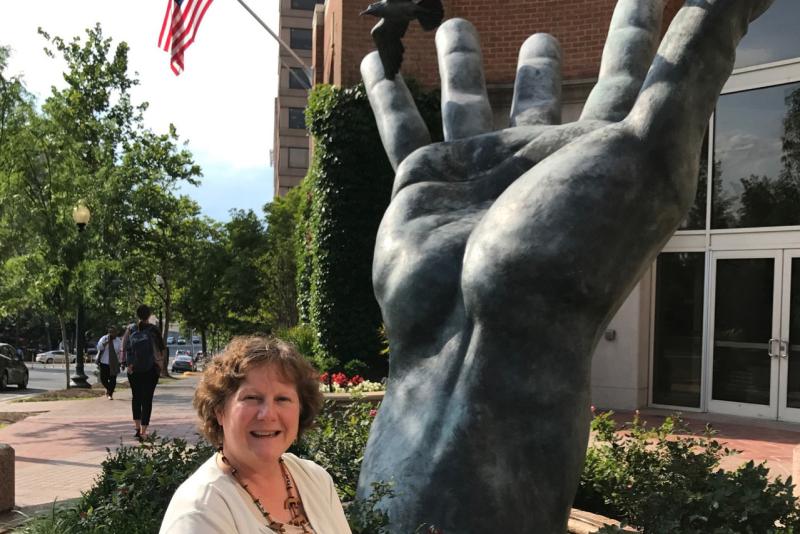 Robin Peuser is a Supervisory Program Analyst in NOAA Fisheries’ Office of Habitat Conservation. She has worked for NOAA for 14 years. She currently works at NOAA headquarters in Silver Spring, Maryland.

Describe your role in NOAA Fisheries’ Office of Habitat Conservation.

Half of my work is human relations—to get the best people working for habitat. The other half deals with budget, strategic planning, and performance, which shows the value of our work. Even our budget narratives to Congress are words informing others on the value of our program.  Helping others understand what we do and how we do it—I love that in our program! We don’t just talk about restoration and protection, we’re actually doing it all over the country, in all marine habitats. I’m excited that our work is making a difference.

What habitat work has been especially inspiring to you?

Two things. First, fish passage efforts are impressive, because it seems so simple, but the immediate benefits to fish and the ecosystem are major. Second, deep-sea coral work. We’re exploring the next, unknown frontier on Earth. The deep-sea coral program is amazing, and they’re always finding new species and habitats. Then they take this information to the fishery councils, which are taking actions to protect it. From discovery to protection, it works quickly, and that’s impressive. It’s a tribute to the value of the program’s work.

Describe a time when fish and their habitat surprised you.

In graduate school for oceanography, we went on a research cruise out of Woods Hole, Massachusetts. It was an annual survey to collect and analyze the catch. To see all the diversity, all those amazing creatures—for example, I had never heard of a sea peach (an invertebrate), and we caught one. Redfish, Spanish mackerel and all kinds of fish. There were huge whale cod, bigger than me. The colors were brilliant—Wow, it was magnificent! And I’ll never forget the next haul, because fish were diseased, and they said we were offshore of Boston. A light bulb went off, because what we do on land has an impact in the water, miles offshore. You saw it, but we didn’t have cell phones in those days to record it. When you see something like that, you think, ‘People don’t understand.’ They miss the connection of the land and the sea. It’s out of sight and out of mind.

As a new undergraduate at Dickinson College, my professor in marine geology took us on a three-week field course. We went camping along the coast from Florida to Maine, comparing the coral reefs to rocky shorelines and other habitats. The hands-on learning meant that I learned and retained so much more than anything else. It was the very beginning of my career, and he became my mentor: Dr. Jeffrey Niemitz.