Memories of Sharks Past

An incisive account of how our knowledge of sharks has grown, from Aristotle to the present day, wins a Best Paper Award from the Marine Fisheries Review.

When Europeans first came to the New World, they had no word for shark. Fishermen in medieval Europe kept mostly to rivers, and the few large shark species found near Europe didn't venture into freshwater. Although they were familiar with small sharks, Europeans encountered large sharks for the first time when they arrived in the American Tropics. Lacking a name for the creatures, the Spanish borrowed the word "tiburon" from the Carib Indians. The English ultimately settled on "shark," from the Mayan "xoc." 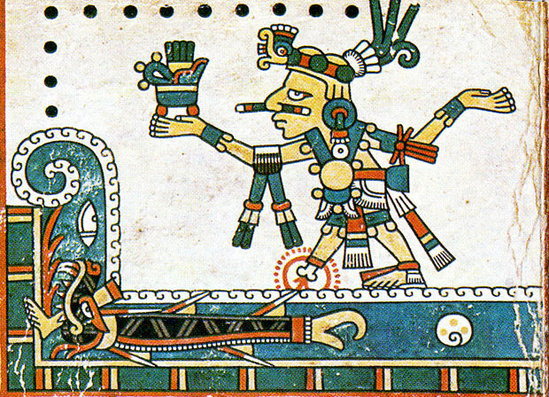 A detail from a rare, pre-Hispanic Aztec manuscript depicts a shark attack on a human. Though the image of the shark is stylized, it has the correct number and placement of fins, accurately shaped teeth, and asymmetric caudal fin of a shark. Photo: Codex Fejérvary-Mayer.

Whatever the name, these animals were much larger and more numerous than the ones we know today. "Imagine what it was like back in the 1500s," said Jose Castro, a shark biologist with NOAA Fisheries. "The number of sharks in those waters can only be imagined, but it must have been tremendous."

Castro has authored several field guides to the sharks of North America and has spent decades studying how fisheries impact shark populations. But his latest published research is not a work of scientific inquiry, but of historical scholarship. It recounts how our understanding of sharks has changed, from Aristotle to the present day.

Explaining his motivation for switching scholarly genres, Castro said that, "Knowledge is very easily lost, even in our age." For his effort at keeping historical knowledge alive, Castro has received a Best Paper Award from the Marine Fisheries Review. The judges were no doubt also impressed by the striking artwork and gripping historical accounts that bring Castro’s narrative to life.

A depiction of a short fin mako shark, by the naturalists Johanne Muller and Jacob Henle. Their early 19th century manuscript was the first major, modern work on sharks and rays. Photo: Muller and Henle, 1838-1841.

Those accounts are a window onto a world now nearly forgotten. Bartolome de las Casas, a 16th-century Spanish priest who lived in Cuba and fought for indigenous rights, penned the first account of a shark attack in the New World. The victim, an Indian slave, was cruelly compelled by his Spanish overseer to dive for pearls in the presence of sharks that "have great mouths and can swallow a man on the first gulp."

Based on the description of the animal in the las Casas account, Castro concluded that it was most likely a white shark. Given that the Indians were not equipped to catch large sharks, the largest ones likely grew to great size. "Those animals had no enemies," Castro said. 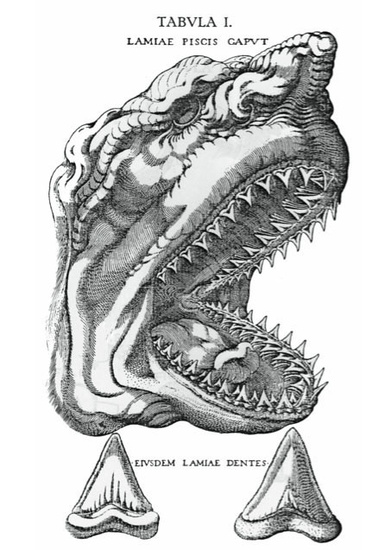 But if 16th-century shark populations are scarcely imaginable, those of a century ago would be no more familiar to us today. The era of industrial exploitation of sharks in North America began in 1917, with the incorporation of the Ocean Leather Company. "Shark skins produce a very high quality leather, and the company had visions of processing a thousand sharks a day," Castro said. Within a few decades, many shark populations were severely overfished, and some have never recovered.

Each generation finds a new way to exploit the diminished shark populations they inherit. As Castro recounts, sport fishing for sharks took off after the release of the movie Jaws in 1975, by which time some shark populations were already severely depleted. And the 1980s saw explosive growth in U.S. sharkfin fisheries as globalization opened markets for U.S. products in Asia.

This generational progression brings to mind fishery scientist Daniel Pauly's idea of shifting baselines. Each generation measures the decline of wild populations against their own earliest memories, so today's old fishermen reminisce about tremendous stocks of cod off Maine 50 years ago. But those stocks were a mere remnant of what fishermen now long dead once beheld. People’s memories only reach back so far, and each new baseline is an eroded version of the one that came before. As memory fades across the generations, our baselines shift, and we fail to see how much has been lost.

"We transform the world," Pauly said, "but we don't remember it."

Castro's work on our historical knowledge of sharks offers a vivid jolt to our collective memory. 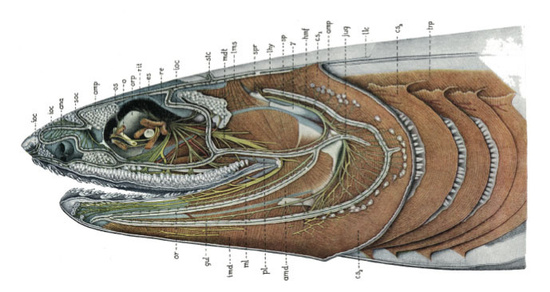 A scientific drawing of Chlamydoselachus—lateral view of head, with dermis and eyeball removed. Illustration:  J. Nomura. From Allis, 1923.