Are these whales the key to solving a scientific mystery? 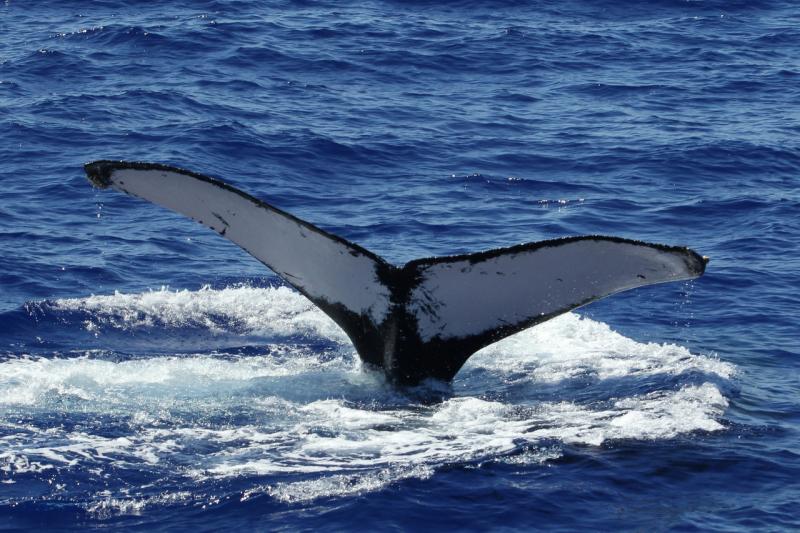 Humpback whales migrate thousands of miles each year. They spend the summer fattening up on seasonally-abundant prey at high-latitude feeding grounds and spend the winter mating and calving at low-latitude breeding grounds. Scientists have been studying humpback whales in feeding and breeding areas of the North Pacific for many years–even decades in some locations–but did not have a comprehensive understanding of the links between these areas until a large, collaborative study took place in 2004–2006.

Known as SPLASH (Structure of Populations, Level of Abundance, and Status of Humpbacks), this study collected and analyzed humpback whale photo-identification data and biopsy samples from all known feeding and breeding grounds in the North Pacific. Results from this research helped to establish four distinct population segments of humpback whales in the North Pacific. While most of the 14 humpback whale populations around the world have recovered from historical whaling pressure, the population in the western North Pacific and three others worldwide are still listed as endangered under the Endangered Species Act.

An interesting finding of the SPLASH study was that a high proportion of individual whales seen on feeding grounds in western Alaska and the Russian Far East were unaccounted for on the breeding grounds, which led researchers to conclude that there may be an unknown winter breeding area. The Mariana Islands were not included in the SPLASH study, but have been identified as a possible winter destination for humpback whales in the western North Pacific. Could the Marianas be the missing humpback whale breeding area? 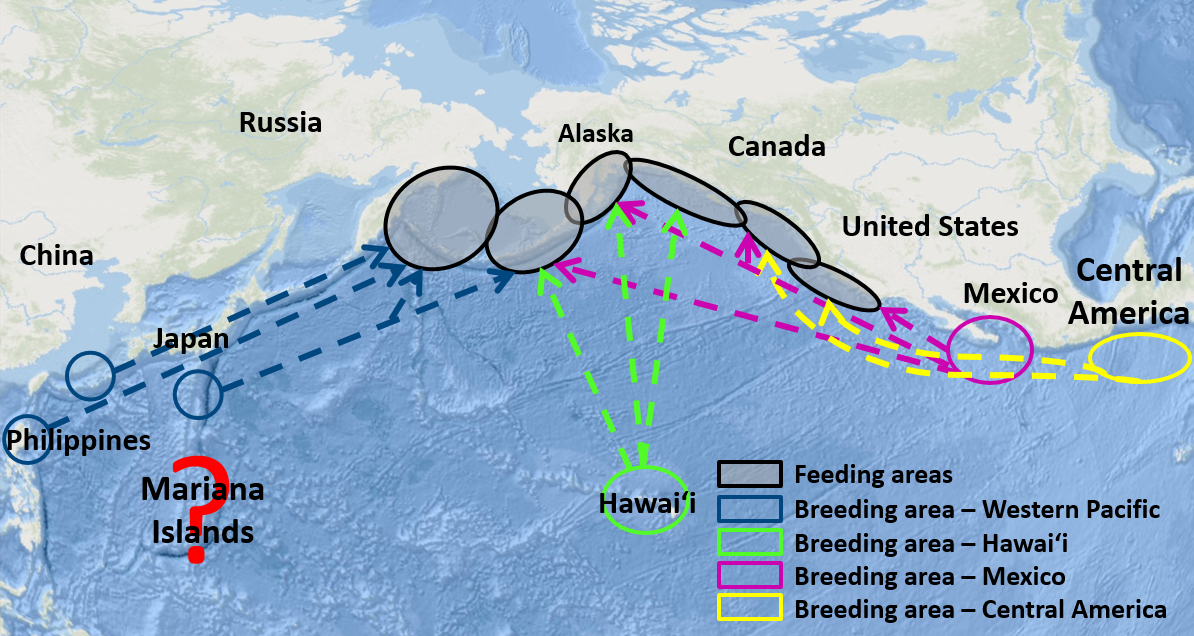 We focused our surveys in shallow-water areas near shore and over offshore reefs, where humpback whales are typically found in other wintering locations. We collected photographs and biopsy samples of individual whales to establish a photo-identification catalog and genetic profiles of whales using the area. In the first year of the study, we were excited to document the presence of both male and female humpback whales, including mothers with very young calves. We made similar observations in 2016 and 2017 and were even more thrilled to find that individual whales were returning to Saipan in different years. We also observed whales in competitive groups, a common humpback whale breeding behavior, where males compete for access to females.  With the presence of newborn calves and competitive groups, we were able to confirm a new breeding location for humpback whales, an important discovery for the conservation and recovery of endangered humpback whales in the western North Pacific. 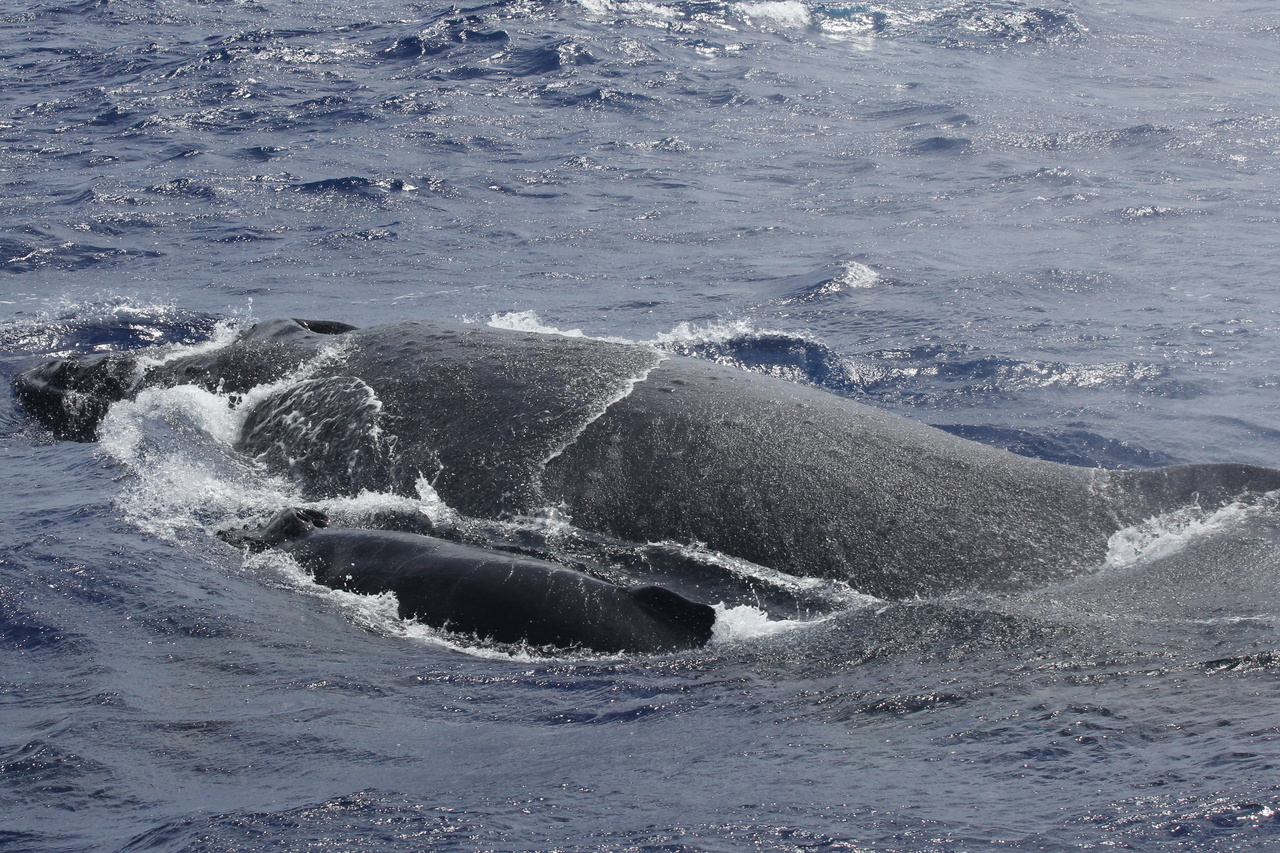 We returned to Saipan in February of 2018 and again found mother-calf pairs and competitive groups of humpback whales. Of the 12 non-calf (juvenile and adult) whales we encountered, we had seen four of them (two males and two females) in previous years. The two resighted females were with calves. These females were first identified in 2015, when they were also with calves. So, not only have we learned that humpback whales are breeding in the Marianas, but that individual females are returning to the Marianas to have their calves! Our photo-identification catalog is growing; we have identified 55 individual whales (including calves), with fluke (tail) images for 32 of the non-calves. We have also collected biopsy samples from 48 percent of the whales in our catalog. 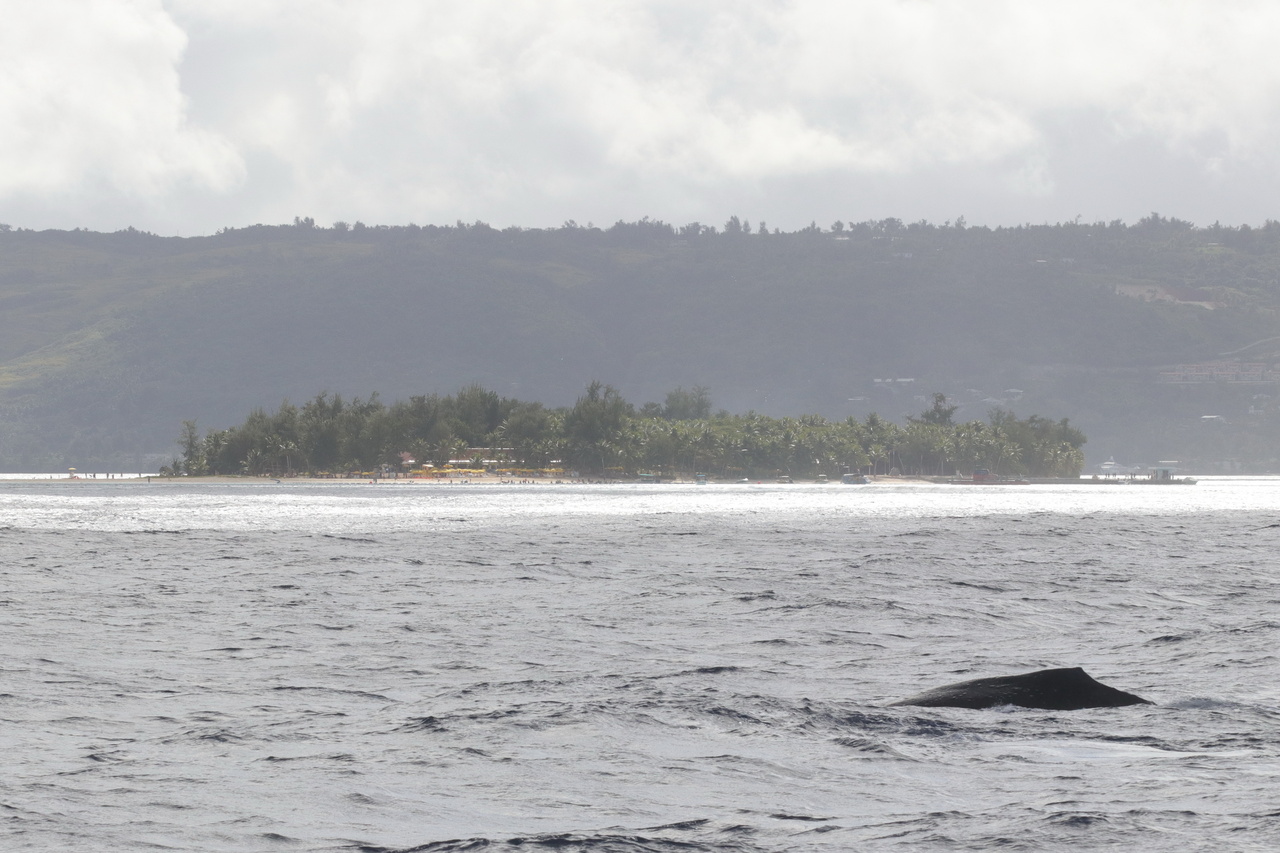 A humpback whale surfaces off of Managaha Island, which is just offshore of Saipan in the Mariana Islands. Photo: NOAA Fisheries/Marie Hill.

Now that we know what humpback whales are doing in the Mariana Islands, we’d like to know where else in the North Pacific these whales are going. For this exploration, we have formed an international collaboration with humpback whale researchers in Russia, Japan, the Philippines, and the U.S.  We will share our catalog of whale flukes with our partners, and they will look for matches to whales in their catalogs. We are also working with researchers at Oregon State University, who are conducting genetic analyses of the biopsy samples we collected to determine how humpback whales in the Marianas compare genetically to other humpback whale populations in the North Pacific. Will these findings identify the Marianas as a missing link for the western North Pacific population? 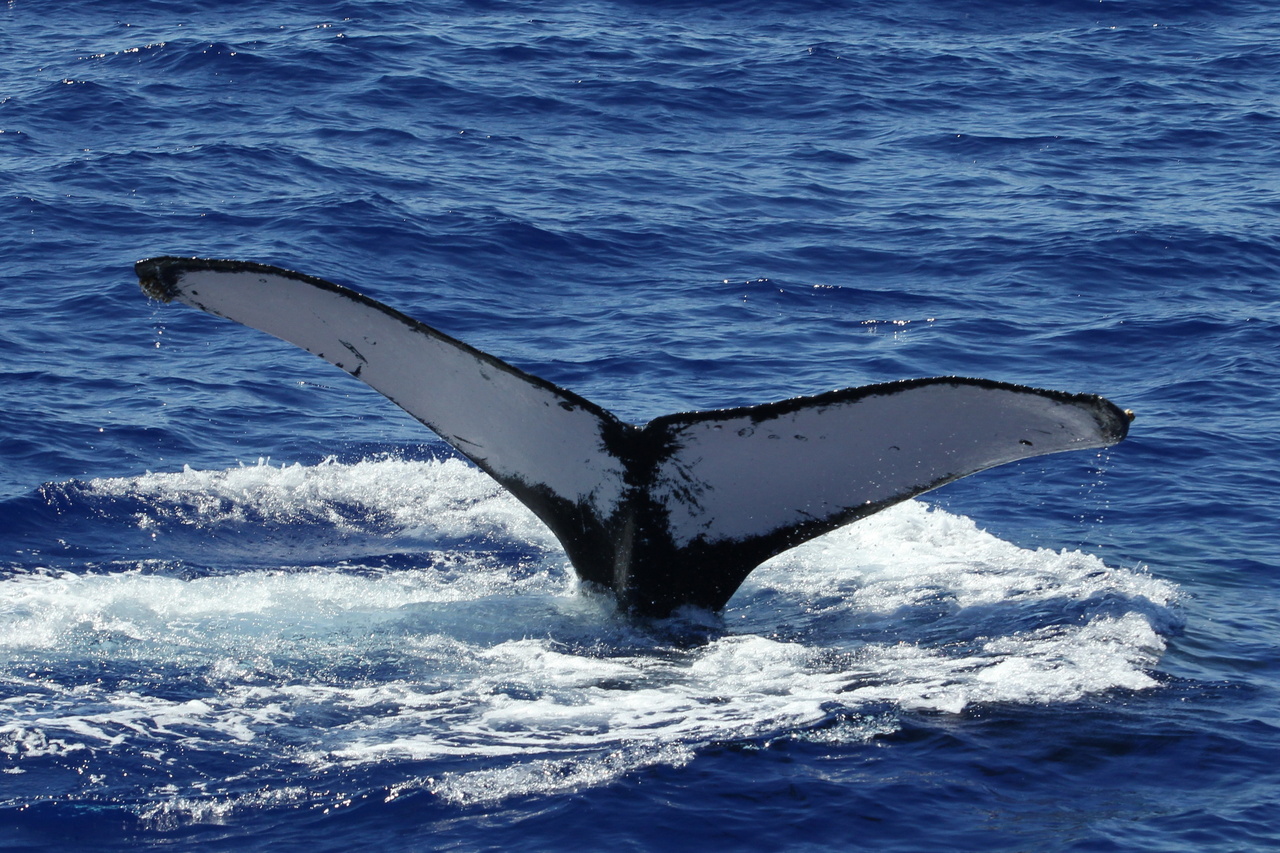 This humpback whale was photographed off Saipan in the Marianas. The unique pattern on its fluke will allow us to track its whereabouts if it was photographed in a feeding or other breeding area. Photo: NOAA Fisheries/Amanda Bradford.

While the humpback whales we identified off Saipan have already provided key insights, there is still much to understand about when and where else humpback whales are occurring in the Mariana Islands. Because of their preference for shallow water, humpback whales can often be seen from shore taking a breath (or “blowing”), surfacing, or starting a dive (often with their flukes up). If you’re a resident of the Marianas, you have a front row seat to these mystery whales from around December through April, and we would love to uncover their secrets with you. If you see a humpback whale and would like to be a part of this investigation, report the details of your sighting (and any photos or video taken) by uploading it to the Humpback Whales of the Mariana Islands project on iNaturalist.org or by sharing it publically over social media (Facebook, Twitter, or Instagram) and tagging it with #MIhumpbacks. Even distant images taken with a smartphone are useful to confirm a humpback whale sighting. Please remember to follow NOAA’s Marine Life Viewing Guidelines if you want to contribute to this study. We look forward to discovering more about humpback whales in the Mariana Islands with you! 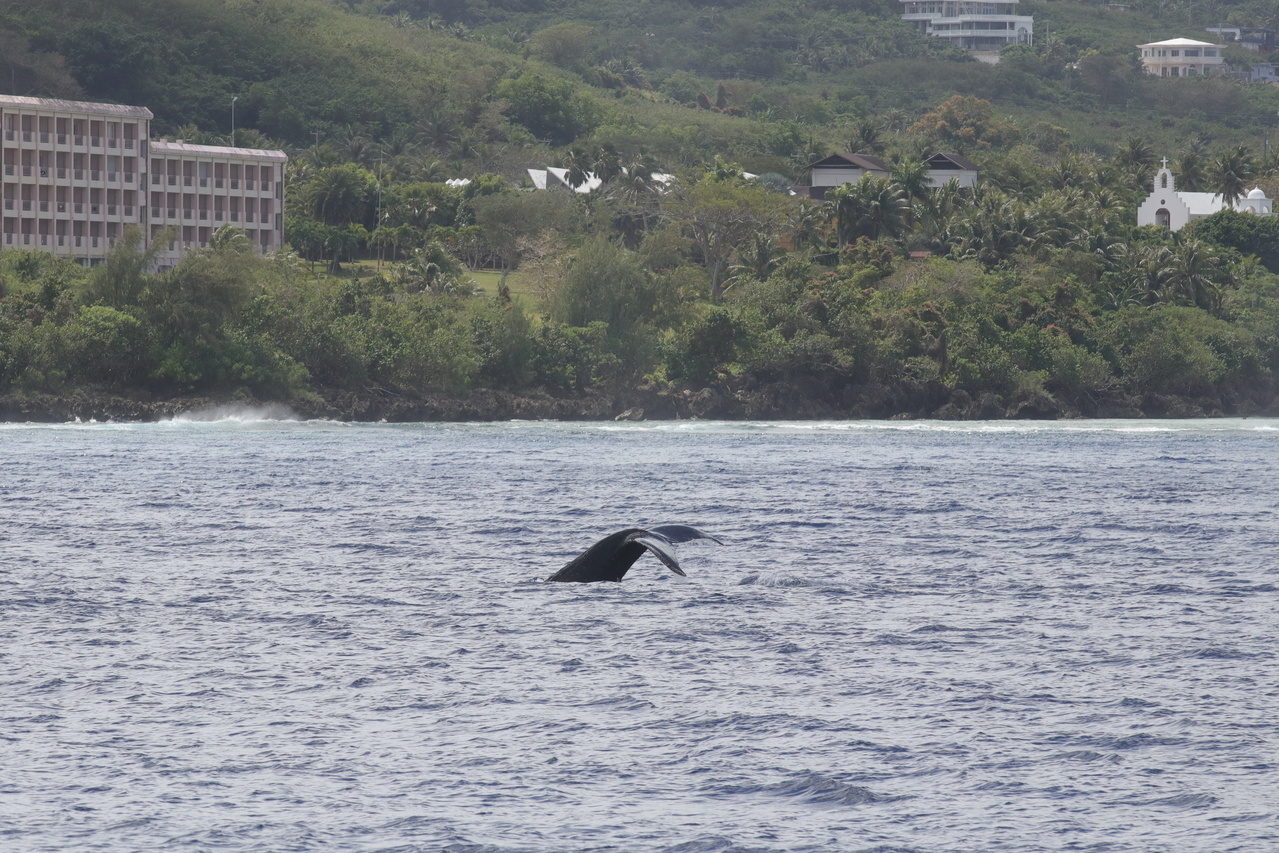 A humpback whale starts a dive close to the western shore of Saipan in the Mariana Islands. Photo: NOAA Fisheries/Marie Hill.