Mischievous Snailfish and Other Mysteries of the Deep 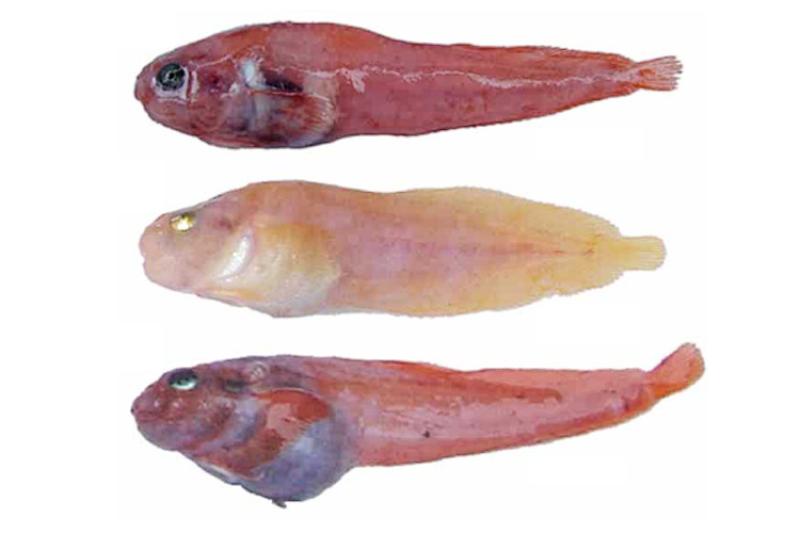 Right now, scientists from the Alaska Fisheries Science Center are at sea collecting information crucial to keeping Alaska fisheries sustainable. The data they collect during yearly stock assessment surveys is used to set quotas for the familiar species that support some of world’s largest fisheries.

But sometimes they find something no one has seen before.

Mischievous, hardheaded, arbiter, dusty, peach, tomato, whiskered, combed, goldeneye, comet and comic snailfish: none of these species were known to science 10 to 15 years ago.

All were discovered by Alaska Fisheries Science Center biologist Jay Orr during stock assessment surveys in the Aleutian Islands.

Orr has discovered new skate, sculpin, sole and other species, but his favorites are the snailfish. Alone or with coauthors including Morgan Busby (AFSC) and Katherine Maslenikov (University of Washington) he has discovered and named 12 new species of snailfish.

“My interest was sparked in 1997 when I collected one specimen that represented a new genus, and several that I thought were a known species out of their range”, Orr says. “When I examined one of these closely, I found it was a brand new species. And so was the second, and the third, and finally, a fourth newly discovered species. That’s what started me down this road.”

Some 350 snailfish species inhabit marine environments from the Arctic to Antarctic, from tide pools to deep sea – deeper than any other known vertebrate. One snailfish species was recently found swimming nearly 5 miles below the ocean surface. More than 50 species have been identified in the North Pacific; many more exist that are undescribed, and more continue to be discovered. In fact, Orr has collected twelve more unknown species that are now just waiting to be described.

Some 350 snailfish species inhabit marine environments from the Arctic to Antarctic, from tide pools to deep sea – deeper than any other known vertebrate. One snailfish species was recently found swimming nearly 5 miles below the ocean surface.

A snailfish looks a bit like an overweight tadpole. Naked of scales, its body seems gelatinous. Most species have a sucking disc in place of pelvic fins, and use it to attach themselves to rocks or other undersea surfaces. Most snailfish stay close to the bottom, rather than swimming in the water column.

Some of these characteristics partly explain why there are still so many unnamed snailfish. “They are challenging for taxonomists,” Orr says. “Because they don’t have scales, they get damaged easily. In the past, biologists might just call all snailfish ‘snailfish,’ instead of attempting to identify them.”

Taking advantage of a small bag added to the footrope of the trawl used to collect samples of other fish and invertebrates for species assessment, Orr’s group was able to collect undamaged snailfish, a true rarity. “The first time it was deployed it came up full of snailfish in perfect condition," says Orr. “We aren’t sure why it works, but suspect it creates a vortex that gently sweeps up snailfish.”

The Snailfish and the King Crab

Don’t let a snailfish get under your skin--or shell, if you are a king crab. Some snailfish species have developed a bizarre strategy to care for their young: they let a king crab do the brooding.

The snailfish deposits her eggs in the gill cavity of a king crab, which makes an ideal nursery. The eggs are aerated by water circulating through the gills.

Sheltered by the crab’s hard, spiny shell, the eggs are about as safe as they can be under the sea: the only known predators of a mature king crab are sea otters and humans.

The arrangement is not such a good deal for the crab, however. The egg mass harms the crab’s gills, and provides no known benefit to the crab.

Sheltered by the crab’s hard, spiny shell, the eggs are about as safe as they can be under the sea: the only known predators of a mature king crab are sea otters and humans.

Orr collects snailfish during fish and invertebrate species assessment cruises in the Aleutian Islands, as well as other regions in Alaska. Many of the new species were found in the Central Aleutians, and had not been identified during routine surveys of the entire Aleutian chain since 1980s.

The central Aleutians are a “biological hot spot” because of high productivity and prey availability. Snailfish may be concentrated in this high biodiversity area because of these favorable conditions. Also, they live and lay their eggs on the bottom, which may tend to keep them in this desirable real estate.

We need to know what species we have before we can manage and conserve our resources. All species have their roles in ecosystems. Without identifying and naming species to be able to talk about them, we can't begin to study them to understand their life histories and how they interact with other species and the environment.  - Jay Orr

What's in a Name?

“I name some of them according to what strikes me about the fish, its color or morphology,” says Orr. “I’ve also used descriptive words from the Aleut language, in honor of the Aleut people. And some species are named after individual people.”

The goldeneye snailfish Allocareproctus unangas was named in honor of the Unangas, the Aleut people of Atka Island, near which the species was discovered.

The species name for Careproctus lerikimae, the dusty snailfish, is an amalgam of the first names--Libby, Erika, and Kim--of three scientists who helped collect the first specimens.

One hardheaded snailfish (Lopholiparis flerxi) was affectionately named after a colleague known for his keen eye for unusual specimens – and for his strong opinions.

Two most recently discovered species were named after retired leaders at the Alaska Fisheries Science Center who supported work in fisheries ecosystem management and biodiversity.

“And they are just great guys,” says Orr. Orr has not named any species after himself ("that’s just not done"), but other scientists did: a whole new genus of fossil fish is named Orrichthys, in honor of Orr’s contributions to the field.