Rare Snailfish Found in Aleutians, Only a Dozen Specimens Ever Recorded 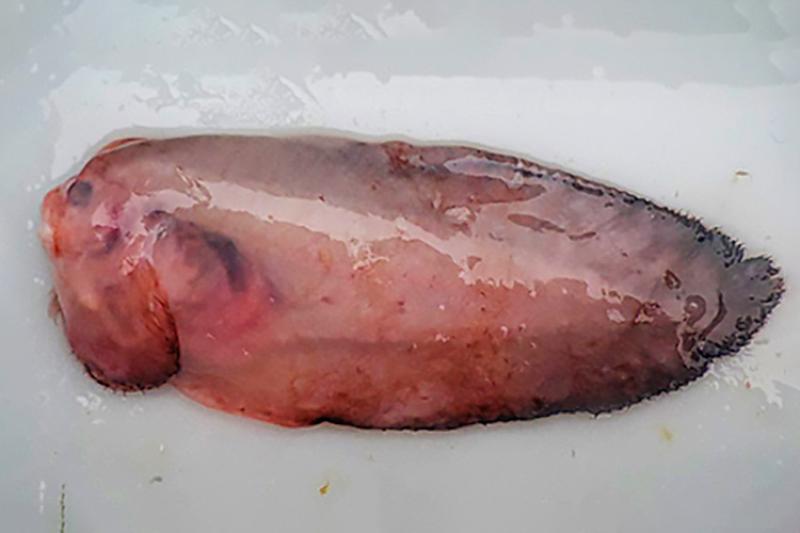 Alaska Fisheries Science Center biologist Jay Orr confirmed that a fish collected during a routine fisheries survey is a species that has only been encountered once in more than a decade. Little is known about this creature, identified as a gray snailfish. The fish is so uncommon it has only been collected a dozen times since it was first discovered 30 years ago.

The gray snailfish was found during the Center’s annual survey of the remote waters around Alaska’s Aleutian Islands. Scientists are gathering information to assess the health of commercially important fish and crab species.

Snailfish are small and almost gelatinous; they resemble a tadpole and have no scales. Interestingly, snailfish can be found in shallow tide pools and the deepest oceans around the world, deeper than any other known vertebrate. The fish’s deep ocean habitats in rough waters around the Aleutians make it difficult to study. Snailfish are also fragile and can be easily damaged which made identification challenging in the past.

But when Orr and his group started using a special net attached to a standard trawl net during surveys, they began to collect snailfish in perfect condition. That set off a wave of new discoveries. Orr is a leading expert on Alaska snailfish. In the past decade, he’s discovered and contributed to the discovery of 12 new snailfish.

The snailfish other Center biologists found in recent weeks is so unusual the field crew first believed they had a new species. They photographed the specimen, which came from the western Aleutians, and preserved it for further analysis back at Center labs in Seattle.

Orr identified the gray snailfish, or Careproctus canus, by examining the photos. “It’s a very rare species,” Orr said. “Snailfish are really diverse; there are a lot of different species.”

Every Careproctus canus has only been found around the Aleutian Islands. They live in waters between 420 to 1423 feet deep and can grow up to almost eight inches long. In general, “snailfish are opportunistic predators, feeding on small crustaceans and other invertebrates small enough to fit in their mouths,” Orr said.

Snailfish from the deep are a reminder of how much we don’t know about our oceans—that they’re holding secrets just waiting to be discovered.