Working in western reaches of US and possibly discovered a new fish species. 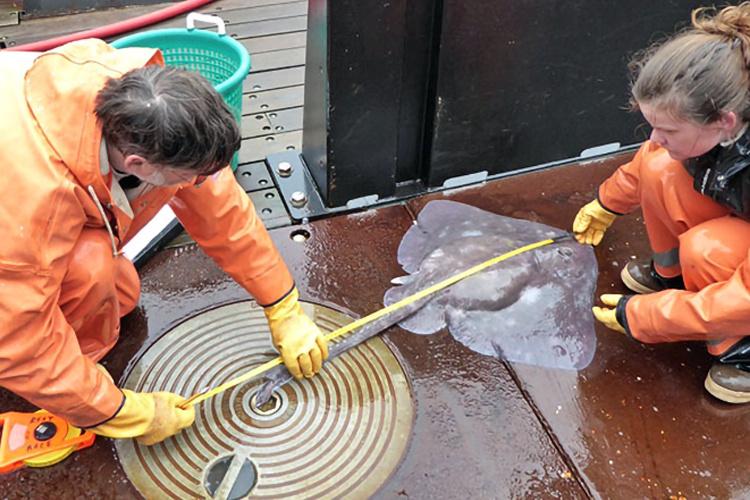 After 10 days of constant fishing and surveying, we took time to re-coup, get clean, and rest. We rafted to the Alaska Provider, our partner survey vessel, in Holz Bay on Attu Island, which is the westernmost part of the US. 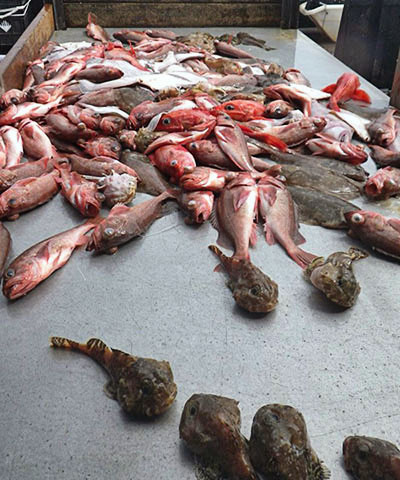 Researchers are finding more fish than invertebrates in a typical catch from the western Aleutian Islands.

In recent days, we used the trawl net to sample at nine locations on Stalemate Bank, a shallow spot 80 miles west of Attu Island. The area is only 20 miles from the line demarking the US and Russia. The US is a big place!

The bottom trawl survey’s aim is to learn the abundance and diversity of groundfish and invertebrates that live along the seafloor. Compared to the eastern and central Aleutians, there aren’t as many invertebrates in the west but the fish are abundant, especially Pacific Ocean perch, northern rockfish and Atka mackerel. At a couple of stops at Stalemate, the fish were so abundant that they filled the net to the bursting point in minutes.

After almost two weeks, the current science crew has turned into an efficient team. Paul von Szalay is in charge of catch processing. He identifies and records all the species, taking their weights and counts. He then enters all the catch data into a computer, verifying all the information, and cataloging all the images that we take with the deck camera. The deck camera is an important tool—we take a picture of every catch in case we need to verify the amount or main species. We also use the camera to take pictures of voucher specimens, which are specimens we preserve and take back to the laboratory in Seattle to confirm identifications of rare species or even describe new species. 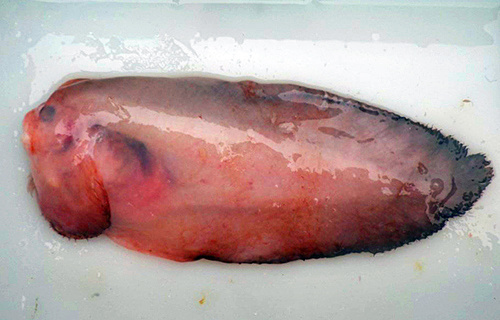 Scientists believe they may have found a new species of snailfish, further analysis is needed to confirm.

Paul thinks he has a snailfish that may be new to science, but Jay Orr back in Seattle will have to use his expertise to sort it out. (*Update: The snailfish has been identified as Careproctus canus, a rare species. Only a dozen specimens have been collected in 30 years.)

Other members of the team sort the catch, determining each fish’s gender, measuring their lengths, or extracting fish earbones (otoliths) that tell the fish’s age. Specialists like Kim Sawyer scan stomachs to determine the principal diets of important species. Crystal Peterson samples Pacific halibut for otoliths, size, and maturity, or tags halibut for a separate International Pacific Halibut Commission study.

Gordon Alford is an electronics technician who is troubleshooting and testing the new barcode length measurement system we are using. Mark Spangler is a volunteer and graduate student from the University of Alaska at Fairbanks. He is studying frogs for his thesis but came out with us to experience at-sea fisheries science.

Soon, the team will begin the final week and a half of the survey.