What it’s like to spend seven weeks in remote waters. 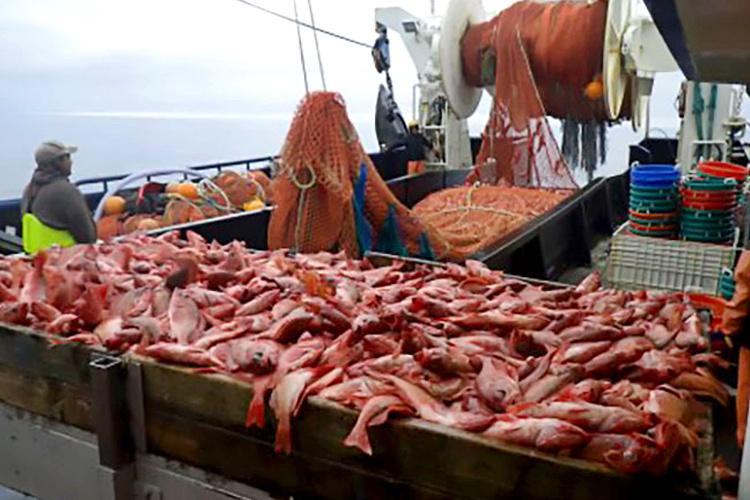 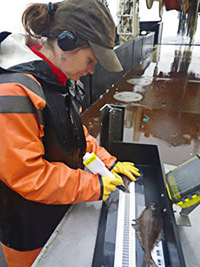 Recently, we’ve been waiting for the current to slack-off so that we can set the research trawl net. We do this survey every two years by chartering two commercial fishing vessels and fielding a team of six scientists to work up the catches and collect the data.

This year, I am spending seven weeks aboard the fishing vessel Sea Storm as the survey works from Unimak Island, Alaska in the east to Stalemate Bank in the west. We break the survey up into three legs, each about three and a half weeks long. I have joined for legs two and three which will bring me from Seguam Pass to the far west and back again to Dutch Harbor for packing up the equipment and returning home. During that time we will have set our net more than 210 times at different locations throughout the island chain.

The research team consists of three survey scientists, a food habits scientist, a halibut sampler from the International Pacific Halibut Commission, and a fisheries observer contracted to round out the team. Every time we haul back the net, the team and fishing crew descends upon the catch, sorts it to species, weighs and counts each species, and then takes biological data from animals of interest.

We measure the lengths of fish for most of the important groundfish, peek into the stomachs to see what they are eating, and take otoliths (fish earbones), to determine the ages of a small proportion of the catch. Setting and retrieving the net and processing the catch takes anywhere from an hour and a half to four hours depending on how much we catch. 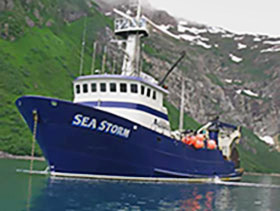 My job as deck boss for leg two is to keep the catch processing on track and to make sure the data are correctly collected and recorded into computer databases before the next haul sample. We typically make 4 to 5 sets a day so we often work long hours to get our work done.

The Sea Storm is 123 feet in length. It was built in Seattle as a Pacific trawler and has been fishing for several decades. For our survey the boat has a crew of five: the captain, Jerry Ellefson; an engineer; two fisherman; and a cook. All told there are 11 of us and the boat is small, tight community. The boat crew has worked together for years and each can anticipate each other's moves--a well-oiled machine.

The galley, or kitchen, is the focus of the boat. We need to keep mindful of common boat etiquette: conserve water, clean up after yourself, and NO RAIN GEAR IN THE GALLEY. Someone may be sleeping and any time of the day, so we need to be respectful of those that will be standing wheel-watch later on during the night.

Last week, we were dancing on the border of the eastern and western hemispheres. We are working around Amchitka Island made famous for the below ground nuclear tests during the 1970s. This area and the rest of the Aleutian Islands Bottom Trawl Survey will be in the eastern hemisphere. Many Americans don't realize how far west the US Aleutians extend--so far west that it is east. By the time we get to Attu Island later in month, we will be on same longitude as New Zealand!