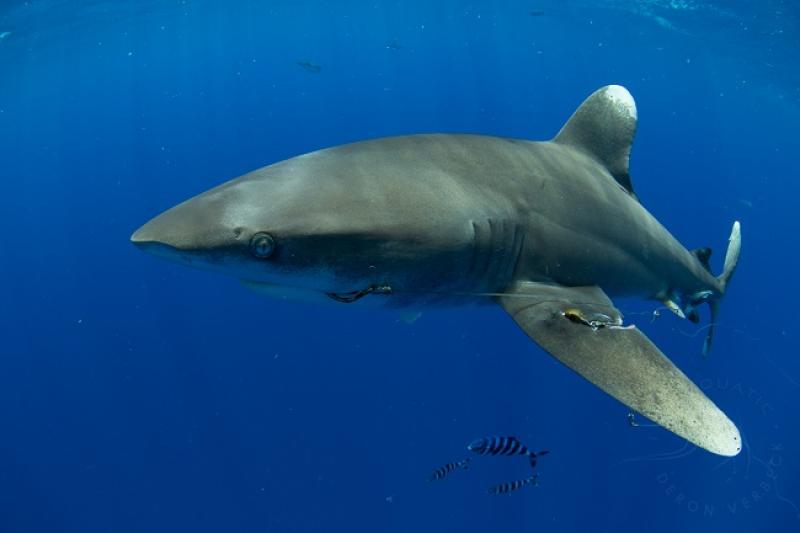 Oceanic whitetip shark photographed off Kona, Big Island. The individual is carrying trailing gear from a longline vessel and has damage to its pectoral fin, likely from the trailing gear including wire leader and weight. Photo: Deron Verbeck

Conservation and management of shark populations is increasingly important on a global scale because many species are vulnerable to overfishing. Internationally protected shark species remain at risk due to bycatch in commercial fisheries. In the western Pacific Ocean, oceanic whitetip and silky shark populations are overfished. Oceanic whitetip sharks are also experiencing overfishing, and were listed as threatened under the Endangered Species Act in 2018. Recent research has shown that switching to a new type of fishing gear can drastically reduce bycatch for these species.

Bycatch Reduction Measures in the Pacific

Several regional fisheries management organizations have undertaken steps to reduce bycatch-related mortality of oceanic whitetip and silky sharks. This includes measures implemented by the Western and Central Pacific Fisheries Commission that prohibit fishermen from retaining these sharks or their fins and require sharks be handled and released as soon as they are brought alongside the vessel in a manner that minimizes harm.

Hawai‘i deep-set longline fishing vessels are now required to use leaders composed of monofilament material, rather than wire, to reduce mortality of captured oceanic whitetip sharks. The fishermen are also required to remove the hook, or, if they are unable to do so, to cut the fishing gear as close to the hook as possible. Cutting monofilament leaders is much easier than cutting wire leaders. This gear and operational change was initiated by the Hawai‘i Longline Association, whose members, more than 90 percent of the Hawai‘i longline fleet, voluntarily transitioned to monofilament leader material before the regulations went into place. Researchers found that sharks could bite through monofilament gear and free themselves more quickly and easily than if they were caught on wire leaders.

Drs. Molly Scott, Melanie Hutchinson, and Jennifer Stahl at the Cooperative Institute for Marine and Atmospheric Research tested different gear configurations for Hawaii longline fishing vessels with co-authors from the University of Hawai‘i. The goal was to reduce injury and mortality to bycaught species. They compared catch rates and condition (e.g., alive, dead, level of injury) of target and non-target species after capture on either wire or monofilament leaders. They also tested different configurations (size, diameter, shape, metal type, and leader material). This helped determine the amount of strength required to either break or open the hook, and the time taken for trailing gear to deteriorate.

Their research was recently published in the journal of Marine Policy. They found that switching from wire to monofilament leaders reduced the catch rate of sharks by approximately 41 percent and still maintained catch rates of target species (bigeye tuna). Branchlines with wire leaders began to deteriorate after approximately 60 days, but hooks with monofilament leaders did not break apart, even after 360 days. Additionally, the breaking strength of fishing hooks was greater for larger, forged stainless steel hooks typically used in U.S. Pacific longline fisheries.

This study suggests that using a combination of monofilament leader material with smaller, galvanized, unforged hooks can reduce the amount of force required to straighten or open a hook by up to 70 percent. Dr. Scott shared, “This combination of gear can substantially reduce injury and mortality of sharks and many other species, including protected species such as false killer whales. We strongly support the Hawai‘i Longline Association and their voluntary transition from wire to monofilament leaders. We also want to highlight the importance of removing as much trailing gear as possible from the animals (including the weights) to prevent further injury.” 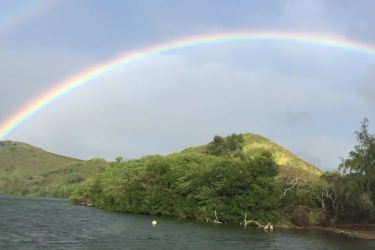 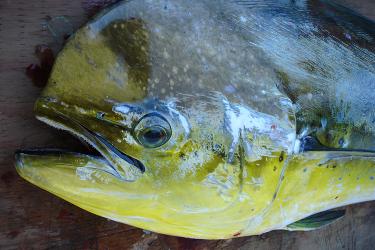 Mahimahi are fun to catch and quite acrobatic. Plus, they are great to eat! Credit: NOAA Fisheries
Story Map 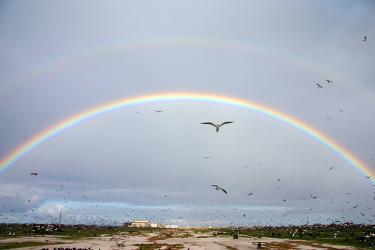