Longlines consist of a mainline, gangions, and baited hooks.

Longlines consist of a mainline, gangions, and baited hooks. 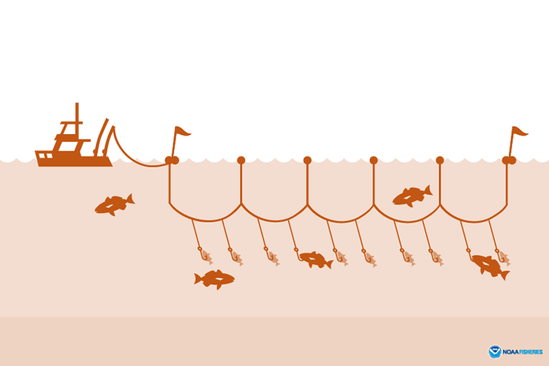 A high-flyer buoy is used to monitor gear position while fishing, and lightsticks are often used to target certain species. The longline set can be suspended at any depth within the water column, depending on target species.

Throughout U.S. waters, including off Alaska and Hawaii.

Lightsticks may attract sea turtles to the baited hooks.

Loggerheads and leatherbacks are the species most commonly captured as bycatch.

A hook can penetrate the turtle's flippers, head, mouth, or neck. If a turtle swallows an entire hook, it can become lodged in the turtle's digestive track, thereby hindering normal feeding and digestion, resulting in starvation and possibly death.

Entanglements may lead to severe lacerations and infections caused by constriction of the lines on the turtle's soft body.

Marine mammals are often entangled or hooked in longline gear.

Pilot whales and false killer whales are known to steal bait and or target catch from longlines and can thus be hooked in the mouth or entangled in the lines.

Risso's dolphins, bottlenose dolphins, and several species of whales have also been documented as longline bycatch.

Injuries from these interactions can include lacerations, puncture wounds, exhaustion, and drowning.

Current bycatch reduction measures include the use of circle hooks, with the shape and smaller opening reducing the likelihood of turtles and marine mammals ingesting hooks or being caught. When hookings do occur, they are superficial and primarily in the mouth, which reduces internal injury and allows for safer release. Circle hooks used in combination with finfish bait like mackerel significantly reduce sea turtle bycatch.

Other measures can also reduce the number and severity of marine mammal interactions: