In September 2015, the Hawaiian monk seal research program is embarking on a research cruise aboard the NOAA research vessel Oscar Elton Sette for a 28-day project in the Northwestern Hawaiian Islands. 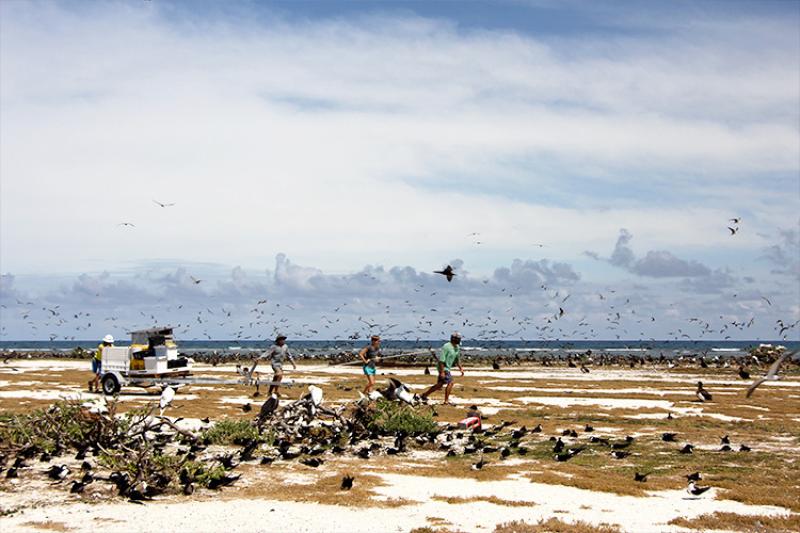 In September 2015, the Hawaiian monk seal research program (HMSRP) will be embarking on a research cruise aboard the NOAA research vessel Oscar Elton Sette for a 28-day project in the Northwestern Hawaiian Islands (NWHI). The mission will focus on saving seals, testing new surveying technology and bringing our summer field researchers home safely.

During this cruise, the HMSRP will be returning to the wild two young monk seal pups, which have been rehabilitating at the Ke Kai Ola monk seal hospital on Hawai'i Island for the past several months. These pups were prematurely weaned from their mothers and very likely would not have survived without HMSRP intervention. During rehabilitation, the pups received the nourishment they needed to be able to return to and survive in the wild. The team will also be searching for additional seals that need to be brought in for rehabilitation because of illnesses or malnourishment.

While onboard the Sette, HMSRP researchers will also be conducting a survey of monk seals on Niʻihau, a privately owned and rarely visited island that is home to a large portion of the monk seals in the main Hawaiian Islands. The information gained from this survey is vital to more accurately estimate the total population of monk seals across the Hawaiian Archipelago.

As the ship moves further up the island chain, the research team will conduct surveys of the habitats of some of the islands for monk seals, turtles, and vegetation using unmanned aerial systems. They will also survey archaeological sites and search for marine debris both on land and in the water. These new aerial technologies may prove to be very useful tools for gaining important information about multiple aspects of these remote islands, as well as understanding how climate change and other natural and human-caused factors affect Hawaiʻi's flora and fauna, and the islands themselves.

Finally, the primary mission of this project will be to pick up field camps that were deployed at five island field sites in the NWHI in May 2015. Biologists at these field camps have been conducting monk seal population-assessment surveys for the past four months, as well as documenting the survival of seals and intervening to help any seals in trouble, such as individuals entangled in marine debris or pups separated from their mothers. The information the field biologists have collected over the summer will add to the large and detailed dataset that NOAA has been collecting since the early 1980s. These data are essential for many research, management and survival-enhancement actions by NOAA and other partners for ensuring Hawaiian monk seal conservation now and in the future.