A new study provides a comprehensive and quantitative look at initial and lingering effects of the eastern Pacific marine heatwave on Gulf of Alaska coastal and marine ecosystems. 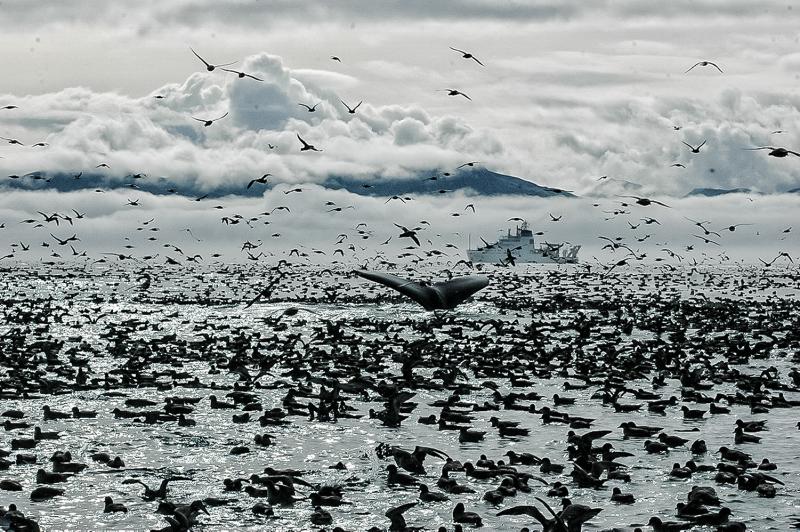 The eastern Pacific marine heatwave, which occurred from California to Alaska in 2014–2016, was the longest lasting heatwave globally over the past decade. A new study led by NOAA Fisheries scientists and partners looked at its effects. They found that the heatwave affected various components of the Gulf of Alaska marine food web from plankton to whales to humans. There have been various impacts, some positive and some negative. Some of these impacts persisted through 2019, when this study was completed.

“As of 2019, the Gulf of Alaska ecosystem had yet to recover from the effects of this major heatwave,” said Rob Suryan, from the Alaska Fisheries Science Center who is lead author on the study. “What also is remarkable is how rapidly conditions changed and that species from all trophic levels and age classes responded. The community composition, or proportion of species that make up the ecosystem, are distinct from what we observed prior to the heatwave.”

Since 2012, the percent of global ocean experiencing strong or severe heatwaves has increased from 30 percent to nearly 70 percent in 2016. There has also been an increase in documentation of disturbance to marine ecosystems, biodiversity, and ecosystem services associated with marine heatwaves.

Effects of the Pacific Marine Heatwave on the Gulf of Alaska

In the Gulf of Alaska, the marine heatwave was particularly strong in the spatial extent, duration, and magnitude of ocean warming. It was also unique in that it extended down to the seafloor and affected a broad diversity of habitats. Its effects were seen in offshore oceanic to intertidal waters in glacial fjords.

From these data, scientists determined how the biological community responded as a whole and which species exhibited negative, positive, or neutral responses. They also looked at whether species showed continued, multi-year response or signs of recovery for up to five years after the onset of the Pacific marine heatwave.

Scientists observed changes in a number of key indicators, including:

Around half of the ecosystem indicators showed an abrupt change during and a prolonged response after the marine heatwave ended. According to NOAA Fisheries staff who prepare annual Ecosystem Status Reports for fisheries resource managers, even in 2020, some of these Gulf of Alaska indicators had yet to recover.

Warm water anomalies persisted for at least 4–5 years after the beginning of the Pacific marine heatwave, especially in the lower water column of the continental shelf. As a result, various life stages of many organisms were still experiencing above-average warm conditions for up to five subsequent years. This is likely contributing to the lag in returning to pre-heatwave values for the Gulf of Alaska community as a whole.

“Some species did return to pre-heatwave levels soon after the heatwave. However, other species from intertidal algae to whales did not. These results signify the magnitude of the heatwave and suggest the Gulf of Alaska ecosystem had passed a tipping point that could no longer be buffered by resiliency in the system,” said Suryan.

Half of the indicators showed a strong response during the heatwave. However, the direction of responses varied.

Indicators with primarily negative responses were:

During the heatwave, humpback whales in the northeastern Gulf of Alaska exhibited a precipitous decline and remained low through 2019. Warm water-associated zooplankton abundance showed a positive response, but also stayed positive even as the water column cooled the year after the heatwave. Surprisingly, the cool water-associated zooplankton community did not show a marked decline during the intense warming of the heatwave, as we would have expected based on studies elsewhere. Not surprisingly, species that eat primarily zooplankton or a variety of fish and zooplankton—including storm-petrels, gulls, and cormorants—showed primarily neutral responses. Juvenile groundfish abundance that showed positive trends included southern rock sole and sablefish. Commercial fish harvest with positive trends included chum salmon, sablefish, coho salmon and pollock, with regional variability among ports.

Some aspects of the Gulf of Alaska community were less affected. About half the indicators showed short-term or no detectable response. They included:

Ecosystem indicators that show little or no responses to such a large heatwave also provide important information about resilience in the marine environment.

Outlook for the Gulf of Alaska

It is still possible that the ecosystem could revert to pre-heatwave conditions. However, since the heatwave ended, there was a re-intensification of the warming through fall 2018 and summer 2019. Some indices, including spring chlorophyll size composition and warm water copepod abundance, returned to heatwave levels in 2019.

In fact, recent warming events that began with the eastern Pacific marine heatwave appear to be  still affecting most of Alaska, including the Gulf of Alaska, the Bering Sea, and Arctic Ocean. Some recent years are among the most anomalous on record.

This year, scientists are hoping to get on the water again to assess how the ecosystem is doing. This is particularly important to do since they weren’t able to conduct several key research surveys in 2020 due to the COVID-19 pandemic.

Understanding how marine ecosystems respond to cyclical, linear, or random environmental change, or their additive effects, is a key challenge in marine ecology and resource management. However, it is critical for scientists to be able to understand and predict species responses. That will allow resource managers to successfully manage commercial, recreational, and subsistence fisheries and protect marine mammal species in Alaska.

“This analysis is a good basis for future studies,” said Suryan. “What we need to do next is identify the mechanisms that cause species abundance fluctuations. For instance, understanding what forage fish and zooplankton species do well or poorly when water temperatures are warmer is critical for understanding how the marine mammals, seabirds and commercial fish stocks that feed on them will fare in this same environment.”

NOAA Fisheries and partners, through their long-term research surveys, are continuing to monitor environmental and ecosystem conditions. Collected and analyzed data are being used to enhance predictive capabilities and help resource managers, fishermen, and coastal communities anticipate, prepare and adapt to these and other climate-related changes.