New Report on the State of the California Current in 2017

The California Current Integrated Ecosystem Assessment is an interdisciplinary research effort led by NOAA scientists along the U.S. West Coast. Its goal is to provide science support for ecosystem-based management of the California Current Ecosystem, a large, complex marine ecosystem in which natural and human systems are inextricably linked. The CCIEA team analyzed the most recent data (from 2016 and early 2017), and a newly published NOAA Technical Memorandum summarizes its findings. 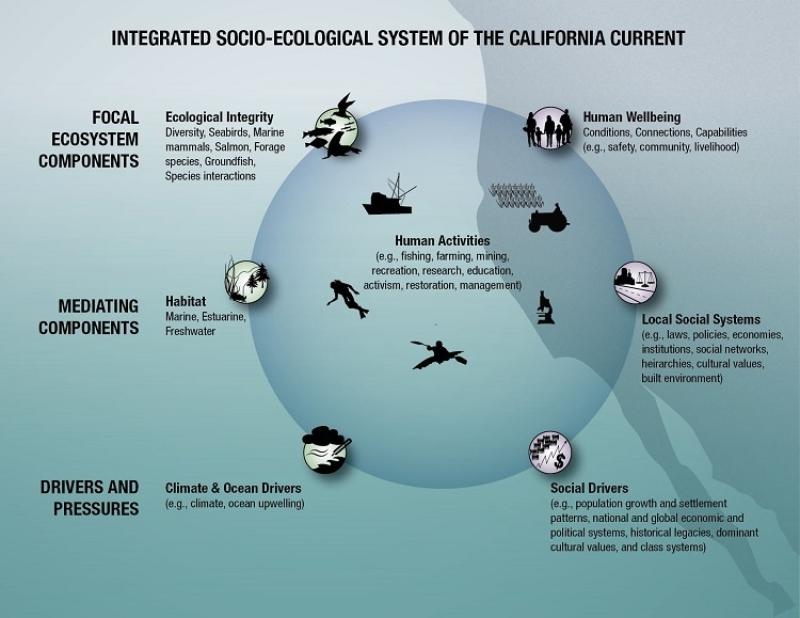 Conceptual model of the California Current social–ecological system. The model represents the complex and inextricable connections between natural components (left) and human components (center and right). Human activities are placed at the center to emphasize their broad extent and because they are where management actions are directly implemented in order to achieve objectives elsewhere in the system. Alternative text: A variety of symbols and text are superimposed over a simplified map of the West Coast of North America and adjacent waters, to represent the region encompassing the California Current ecosystem. The centrally located sphere contains “Human Activities” and includes symbols of a commercial fishing vessel, scuba diver, kayaker, microscope, and farm tractor. To the upper right is “Human Wellbeing”; the middle right represents “Local Social Systems”; the bottom right symbol represents “Social Drivers”. The top left represents elements of “Ecological Integrity”; the middle left symbol represents “Habitat”; and the bottom left symbol represents “Climate and Ocean Drivers”.

The California Current is a region of the Pacific Ocean stretching along the entire U.S. West Coast, from Canada to Mexico. The California Current Ecosystem covers nearly 1,800 miles and includes thousands of plant and animal species, from microscopic plankton to killer whales, from single-celled algae to the human communities that live beside and depend on it for their economic stability. The California Current Integrated Ecosystem Assessment is a large-scale, long-term research effort led by NOAA scientists up and down the U.S. West Coast. The CCIEA's 2017 report, recently published as a NOAA Technical Memorandum, finds the California Current in a state of transition. Ocean temperatures throughout the region were abnormally high from 2013–16. In 2016–17, they began returning to a level more in keeping with long-term averages.

In some cases, the effects of those high temperatures on the species that live in the California Current have yet to be seen. It can take many years before an animal reaches maturity and begins to reproduce, and interactions among different species can raise or lower their responses to climate, so there is almost always a lag time between a significant event (like the warm-water blob of 2014–15) and its effect on the CCE.

The CCIEA team will continue to monitor the region, tracking these and other trends and working with management agencies to develop new and improved data. Ultimately, these will be integrated into new management tools that will help forecast returns, minimize bycatch of protected species, and/or anticipate disruptions that could affect coastal communities. The team will report its findings annually on both the CCIEA web page and in NOAA Technical Memorandums.