Juneau is by far the dominant whale watching port in Alaska. 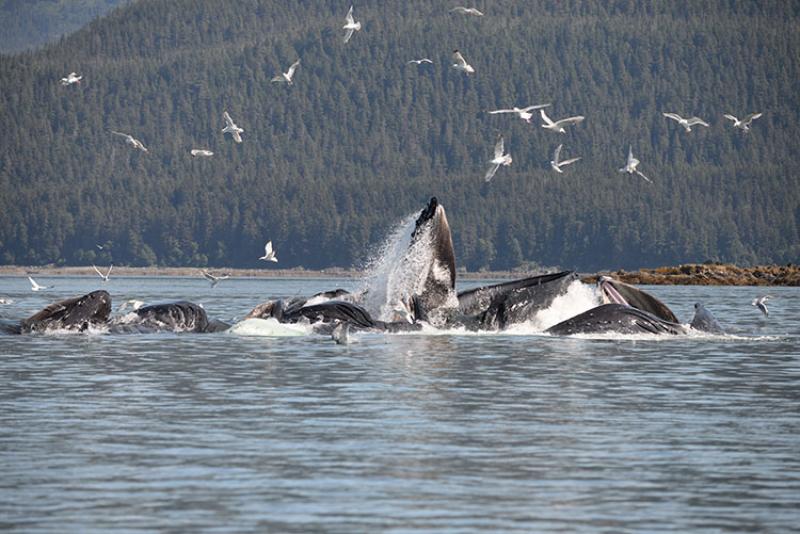 Once hunted to near extinction, whales used to be an important resource for their blubber, meat, and baleen. More recently, they have proven to be more valuable alive. Alaskan waters are rich feeding grounds for several whale species. They’ve also become an increasingly popular place for visitors to view these amazing creatures feeding, breaching, and socializing. Among Alaska’s 2.2 million summer visitors in 2019, about one quarter embarked on a whale watching tour.

According to a new study, more than half a million visitors — about 553,000 people — who came to Alaska last year spent an estimated $86 million on whale watching tours. This confirms that whale watching is an important economic driver.

The study was conducted by McDowell Group and funded by NOAA Fisheries. It measured the economic impacts of 55 businesses and 187 vessels engaged in paid whale watching tours in Alaska’s coastal waters from Ketchikan to Unalaska. Based on data from 2019, the study represents a pre-pandemic baseline:

“The whale watching industry in Alaska has grown significantly over the last decade, particularly in Juneau,” said Bob Koenitzer, Senior Consultant for McDowell Group. “Prior to this study, there was no research that quantified passenger volume and revenue. It's exciting to see that in 2019 there were more than half a million paid whale watching passengers generating tour sales of $86 million. Wildlife viewing is the top visitor activity in Alaska and images of whales are used extensively in marketing the state to visitors.”

“As far as we can tell, Juneau is the largest whale watching destination in the world and likely has a larger fleet and higher passenger volume than any other whale-watching port,” said Dr. Suzie Teerlink, marine mammal specialist with NOAA Fisheries’ Alaska Regional Office.

The study team estimated that one million additional Alaska visitors did not pay for whale watching tours but were able to view whales from cruise ships, Alaska Marine Highway vessels, while engaging in guided saltwater sportfishing, and/or from Alaska’s roadways and harbors.

NOAA Fisheries commissioned the study to document the economic benefits of the whale watching industry and to better understand the importance of healthy whale populations to local economies.

“The magnitude of economic benefits revealed by this study is surprising. We have always known that whales are an important part of our ecosystems and icons of Alaska’s wildness, but it is important to consider the benefits they can bring to local economies through sustainable whale watching practices,” said Teerlink. “We are lucky to have such incredible marine wildlife to share with visitors and our goal is to preserve the opportunity to view these extraordinary and fascinating creatures long into the future.”