Spearfishers can protect their catch and endangered Hawaiian monk seals by never feeding a seal. 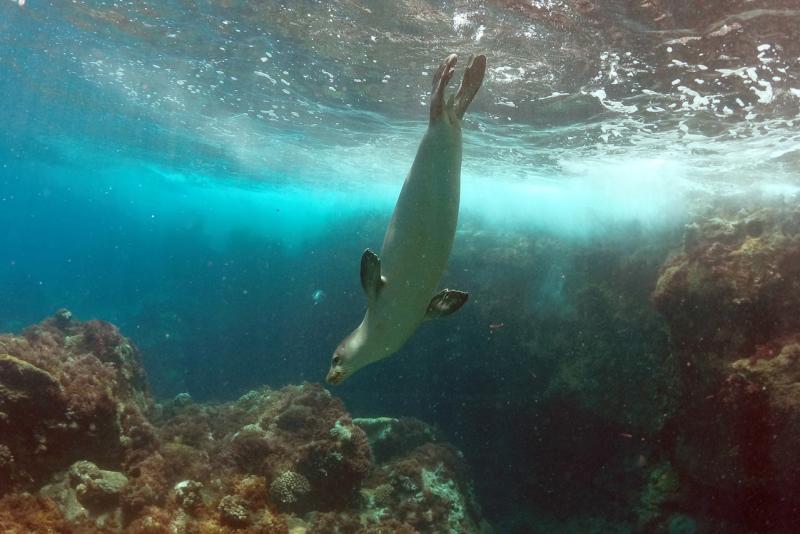 If you’re an experienced spearfisher in Hawai‘i, this scene might sound all too familiar. You successfully spear your dinner, when a curious monk seal appears out of the distant blue haze. Showing a sudden interest in your food, the seal circles around you, keeping a close eye on your catch.

Then, with surprising quickness and agility in the water, the seal makes several attempts to snag your hard-earned fish. With one last triumphant bite, the seal finally succeeds and takes off with the better part of your meal. You’ve paid the “tax” for spearfishing, and the seal snagged a free lunch.

Although this encounter might seem like an unavoidable part of spearfishing, pono* divers never feed Hawaiian monk seals because they understand the long-lasting implications of doing so. They also take precautions so that seals don’t take their catch.

NOAA Fisheries urges all spearfishers to take such precautions to prevent seals from becoming conditioned to approaching divers in search of food and potentially creating a future safety issue for other ocean users or the seals.

If you encounter a Hawaiian monk seal while spearfishing:

Learn more about safe fishing around seals and sea turtles 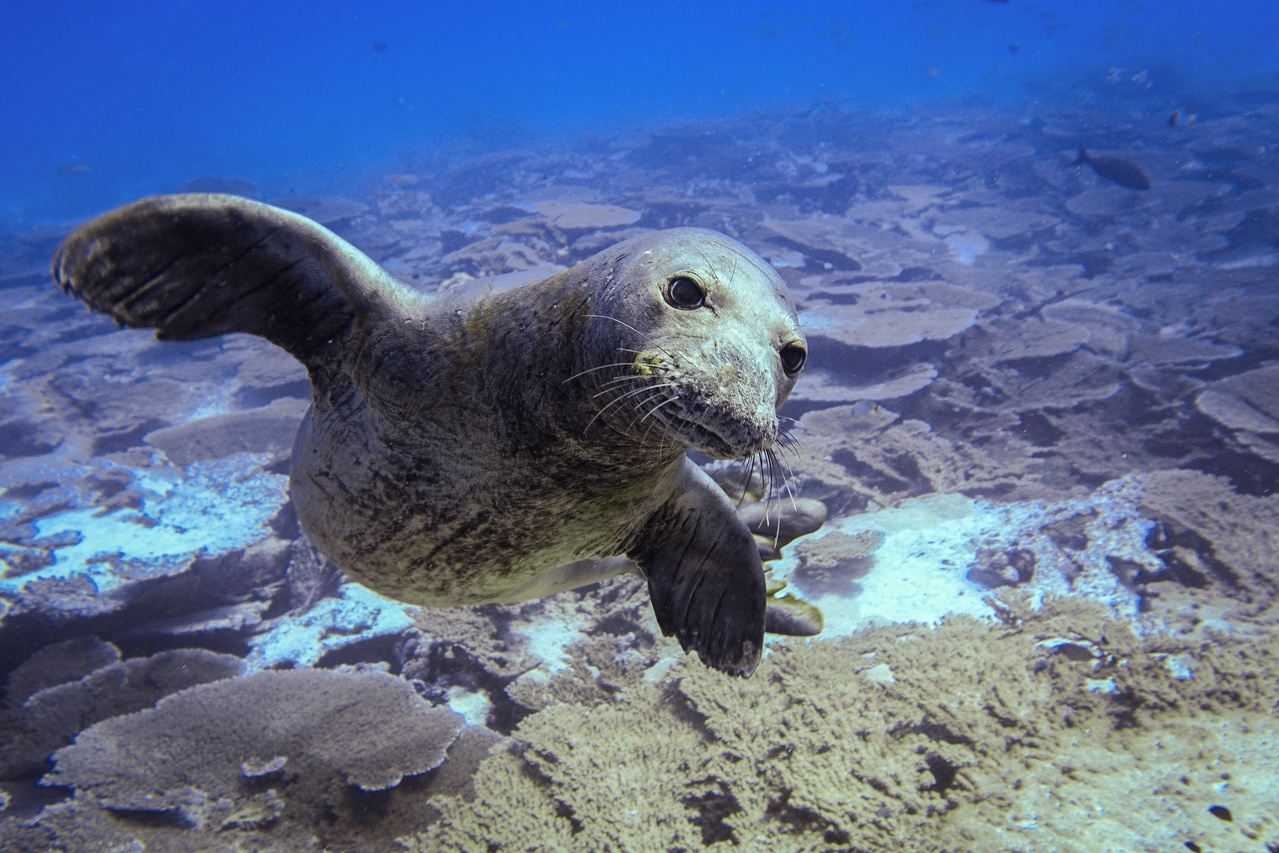 Hawaiian monk seals may look like they want to play and may even approach you in the water, but keeping your distance will help these endangered animals stay wild. Photo: NOAA Fisheries.

“Paying the tax,” or allowing Hawaiian monk seals to take some of your catch, only encourages seals to approach spearfishers and divers in hopes of getting another free meal. Seals are quick learners and, similar to dogs, they can learn behaviors—both positive and negative—by making associations. So when a seal gets a “reward” (in this case, fish) from people, it will quickly start associating people with food and seek them out.

Monk seals are wild animals and are naturally cautious around people in the water. This can change when seals are rewarded with food and start to become habituated or conditioned to seek people out for food. Interacting or “playing” with a seal can make the situation even worse, so it’s best for all swimmers and divers to keep their distance and ignore seals that approach them.

For spearfishers, a habituated seal starts out as a nuisance that curiously approaches them or even tries to sneak a fish off their spear or stringer. But over time, habituated seals that have learned to rely on people to get food can become aggressive towards or even injure spearfishers and other ocean users.

Feeding or habituating also harms the health and welfare of Hawaiian monk seals, the state mammal of Hawai‘i and an endangered species.  Provisioned seals are at high risk of malnutrition, injury, or death. Keeping seals wild by not giving them a chance to associate people with food is critical to the recovery of endangered Hawaiian monk seals, one of the world’s most at-risk marine mammals. 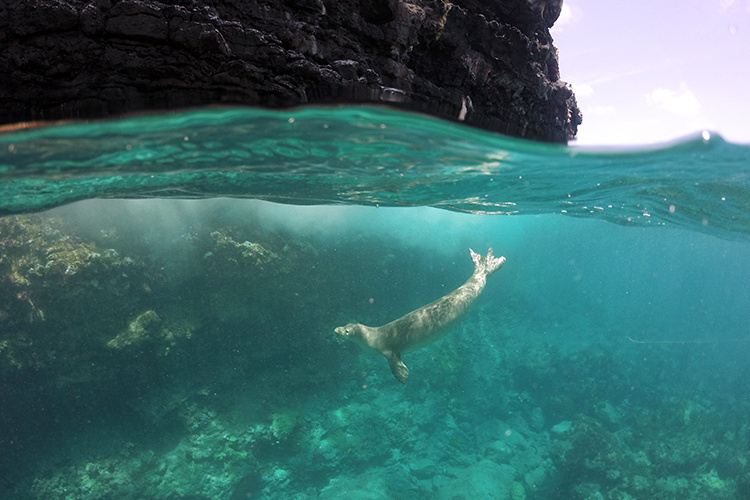 Never feeding seals will keep them from becoming a nuisance—or even a safety threat—to others. Photo: NOAA Fisheries.

When a seal behaves aggressively, such as by biting people or preventing swimmers from swimming or surfacing, NOAA Fisheries and partners must respond to remove this threat to human safety. In the past, we have relocated “problem seals” away from areas with lots of human activity.

However, this is hardly a preferred protection strategy and far from easy to accomplish. Relocating a seal can be financially costly and often requires complex coordination between federal, state, and local agencies. This can exhaust resources and time that could be spent on other critical conservation activities.

Furthermore, transporting a seal from its preferred habitat can severely hurt its chances of survival. For one thing, the seal is now in an unfamiliar place, far away from its former habitat. It also may not have properly learned how to hunt on its own because it became accustomed to depending on people for food.

Feeding seals, either by accident or on purpose, creates a nuisance and a safety risk to spearfishers and other ocean users. In addition, it’s illegal to feed any marine mammal, and doing so will affect their natural hunting behaviors. This is why pono divers never feed seals.

Using the safeguards listed above will help keep seals wild and limit frustrating—and possibly dangerous—encounters between spearfishers and seals in Hawai‘i. 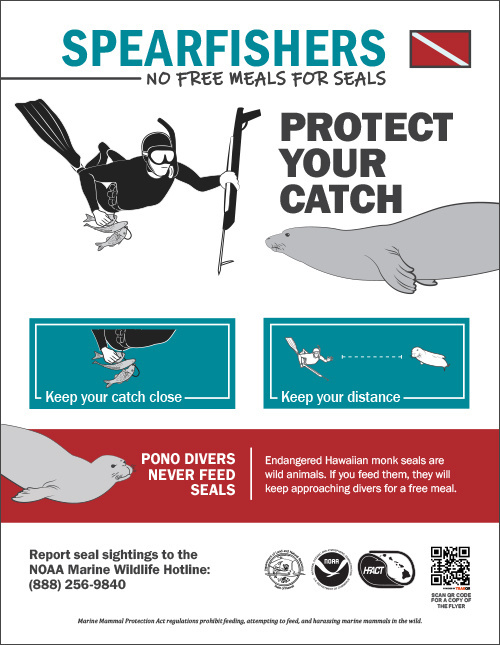 Do you own or work for a fish and tackle supply or dive shop? You can help get the word out on what your customers can do to prevent problem seals! Share this article on your social media pages and print out this flyer to post in your shops.

*Pono is a Hawaiian word with diverse and overlapping meanings. In the context of this article, it conveys a sense of righteousness, responsibility, and a balance or harmony between ocean users and our shared environment. 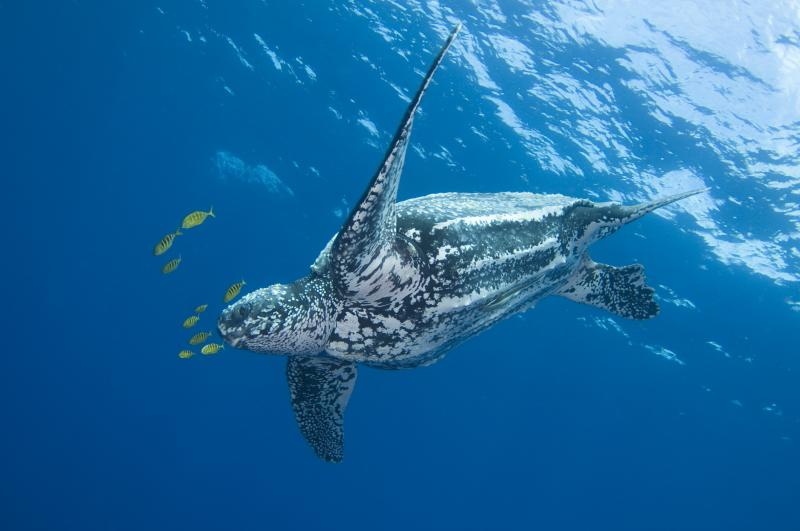