Deploying autonomous sailing vessels with customized acoustic technologies to study whales, fish and seals in remote parts of the ocean. 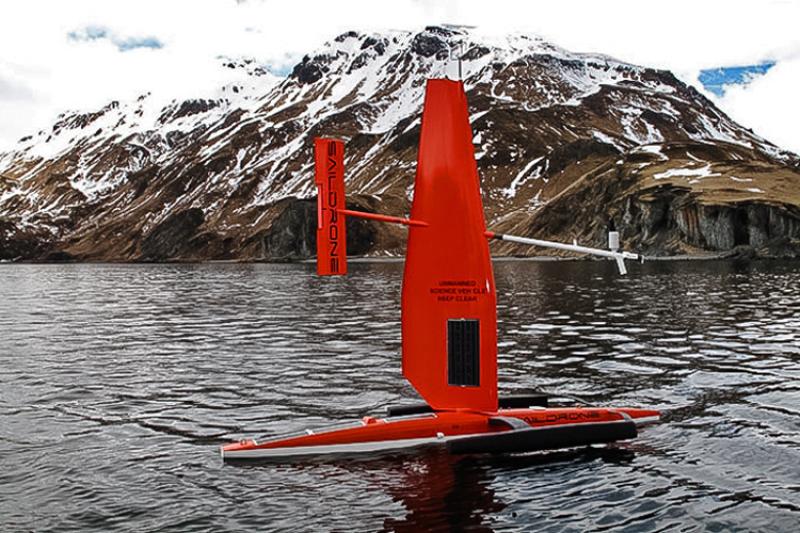 NOAA Research and NOAA Fisheries have teamed up with academic and private sector partners to test innovative technologies that, if successful, will enable researchers to gather information in areas of the ocean virtually off limits to standard research vessels.

Scientists will be using a novel research platform that resembles a windsurfer, called a Saildrone, developed by Saildrone, Inc. Scientists and engineers equipped two of these autonomous, wind- and solar-powered vessels with other newly designed technologies. Their goal is to collect needed oceanographic data and information for endangered and commercially important species living in remote areas of the Bering Sea.

"We have high hopes for this mission – that it could mark a new chapter in ocean research," said Christopher Sabine, director, NOAA Research’s Pacific Marine Environmental Laboratory. "Last year, we successfully implemented a 3-month testbed Saildrone mission in the Bering Sea to remotely collect data on physical oceanographic conditions via satellite in near real-time. This summer, we are testing other new technologies in the hopes of demonstrating their efficacy for remotely collecting critical biological data."

This unprecedented research mission will test new technologies to:

The mission unites scientists and engineers from NOAA, the University of Washington, the Joint Institute for the Study of the Atmosphere and the Ocean, Saildrone, Inc., Simrad AS/Kongsberg Maritime, and Greeneridge Sciences, Inc. The marine mammal related research is possible due to the generous support of the Marine Mammal Commission.

"This advance in technology and science is the result of a sustained partnership between the NOAA laboratories and the University of Washington and reflects the talent and quality of the engineers and scientists involved in the project. Understanding climate change in the Arctic requires new tools and innovative measurements and we are all pleased to be part of that effort. We look forward to the results of this summer's campaign, as well as future measurement campaigns in the Arctic," said Thomas Ackerman, director, Joint Institute for the Study of the Atmosphere and Ocean at the University of Washington.

"We expect to learn a lot. We may find that some of these new technologies work well for the planned research, while others may require that we make further refinements. That's the beauty of science -- It’s an evolutionary process," said DeMaster.

It's the possibilities that are exciting and the potential to further scientific understanding with the help of innovative new tools. We look forward to sharing what we learn this summer.

Regular updates about the mission progress will be posted on both the NOAA Research's Pacific Marine Environmental Laboratory Innovative Technology for Arctic Exploration website and NOAA Fisheries' Alaska Fisheries Science Center website throughout the project duration.

Listen to recording of media availability that took place on June 3, 2016