Coral colonies tolerant to high temperatures will be outplanted to reefs after rehabilitation in a coral nursery. 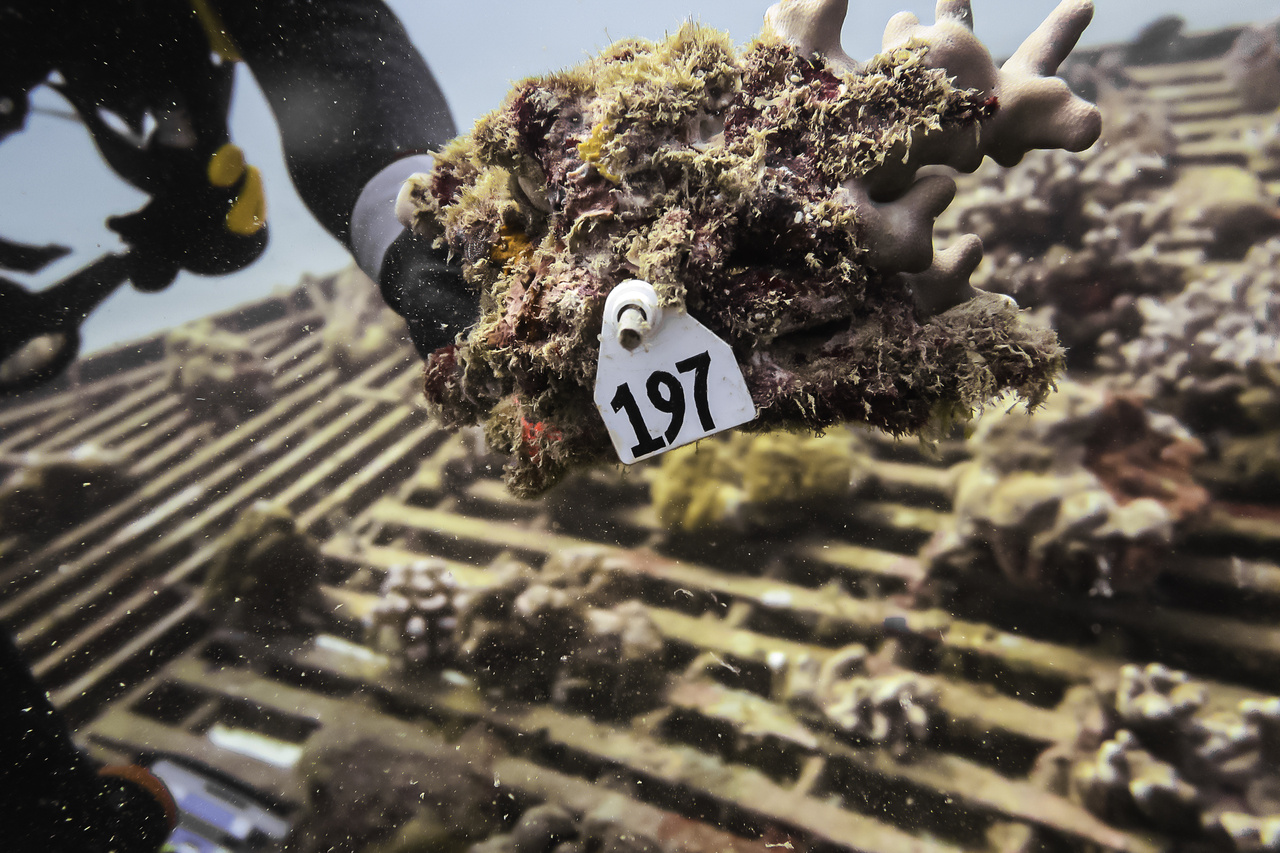 Stress tests in the lab suggests this coral colony is a “super coral” with a high heat tolerance. Credit: NOAA/HIMB.

Thanks to a partnership between NOAA, the Hawai‘i Institute of Marine Biology (HIMB), and others, specific reefs in Hawai‘i are receiving batches of coral colonies that were rehabilitated in a nursery. But these transplants aren’t your average corals.

Some of them are so-called super corals, able to survive the high temperatures most colonies find intolerable. HIMB scientists identified them by subjecting small samples of the corals to stress tests at HIMB labs. When these super corals are transplanted to the damaged reefs that need them, these coral colonies may help form reefs that are resilient to environmental stressors that are bleaching other corals throughout the world.

“We’re not only outplanting corals and getting back what was lost [to ship groundings and other impacts],” says Matt Parry, a fishery biologist with the NOAA Restoration Center and the Damage Assessment, Remediation and Restoration Program. “As we’re doing that, if we can increase the reef’s resilience, then why not have that as an added bonus?”

In 2018, Parry, with partners at NOAA, the Hawai‘i Division of Aquatic Resources, and the University of Hawai‘i, developed a new platform-style coral nursery to help restore damaged reefs.

Many coral nurseries around the globe are designed to grow small coral fragments left over from traumatic events like ship groundings. But NOAA’s recent nursery, installed in 60-foot-deep water near the Honolulu Airport Reef Runway of Oʻahu, is loaded with “corals of opportunity.” These are fully formed coral colonies—of several prominent Hawai‘i reef species—that have become detached from the reef due to storms and other oceanographic disturbances and would have otherwise perished.

This type of nursery allows conservation managers to jumpstart reef recovery efforts. Proof of point: After just two years of rehabilitation in the nursery, these approximately 430 coral colonies are ready for another chance at life in their natural habitat.

But rather than haphazardly outplanting the colonies to the reef, NOAA and partners are carefully studying how the heat-tolerant corals survive in selected plots, says Kira Hughes, program manager of the Gates Coral Lab at HIMB. “The reason [HIMB] joined the project was to infuse some of the science that we have been working on to test resilience in corals,” says Hughes, explaining that the lab has long been researching how to make reefs more resilient to climate change, specifically increased ocean temperatures. “We are setting up the reefs to be able to perform as best as they can in future conditions.” 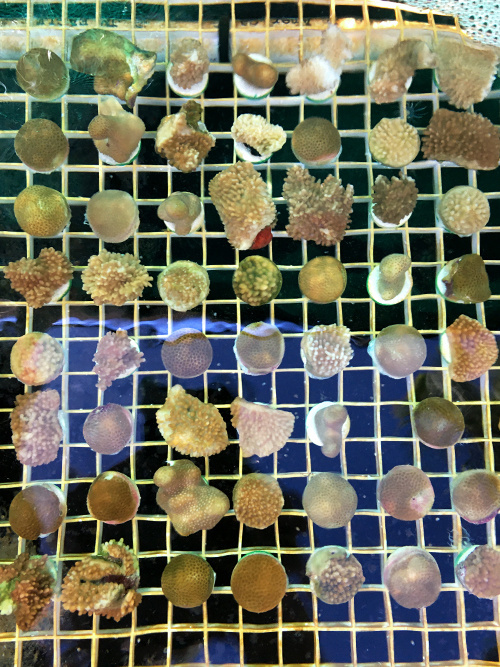 Working towards this goal of building resilient reefs, Hughes and the Gates Coral Lab collected quarter-sized biopsies of each of the coral colonies on the nursery in early 2020. Back at the lab, they subjected the coral fragments to temperatures that gradually increased from 24.5 to 32.5 degrees C (76.1 to 90.5 degrees F) over the course of a month. In past coral bleaching events in Hawai‘i, corals bleached at around 30 degrees C (86 degrees F), according to Hughes.

The Gates Coral Lab will soon be outplanting the nursery’s colonies to experimental plots on the reefs from which they originally came. Some plots will have only the most resilient corals while others will have a random assortment of colonies from the nursery. Other plots will act as controls and not have any outplanted corals.

The hope is that the resilient corals will not only survive on the reef, but also naturally reproduce with other colonies, resulting in a more heat-tolerant reef. Importantly, Hughes stresses, the project focuses on contiguous reefs that protect the coastline by breaking up wave energy (the Honolulu Airport Reef Runway included).

This work will also help scientists and managers better understand if there are biological or physiological tradeoffs to heat tolerance, Parry says.

“Everything in biology comes with a cost, but does it outweigh the benefits?” Parry explains. By outplanting corals with improved heat tolerance, “are you losing out on potential gamete production or speed of growth to keep up with sea level rise?”

NOAA and partners are looking to expand the coral nursery project to other reefs around the islands that have different coral species and environmental conditions, Parry says. 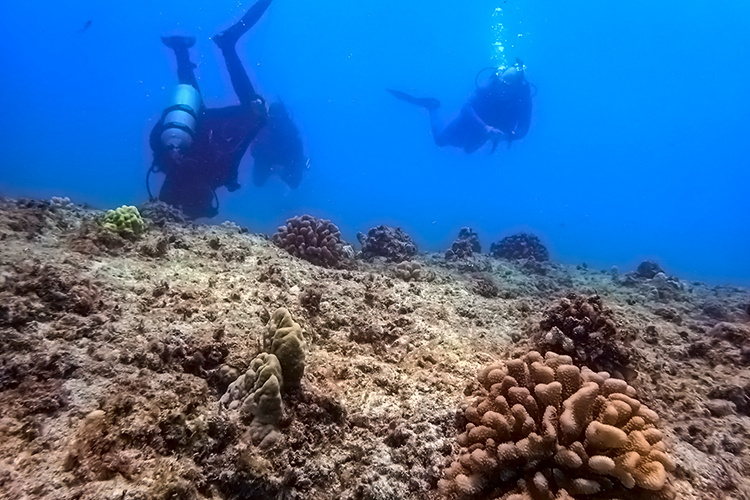 And if all goes according to plan, Maunalua Bay, almost 25 miles away, will receive a redesigned coral nursery platform by March 2021. Compared with the Reef Runway platform, Maunalua Bay’s nursery will be smaller, more modular (allowing for easier in-water installation), and able to withstand increased wave energy due to the shallower waters. Designed by University of Hawai‘i at Mānoa mechanical engineering students (like the original nursery), the Maunalua Bay nursery will have a tri-platform style that allows more people to work on the nursery at the same time, Hughes says.

This is particularly important because the project will be ramping up community involvement in the bay’s reef restoration activities, with help from the nonprofit organization Mālama Maunalua. They plan to eventually have a community day, during which community members can help HIMB fragment and biopsy corals for a stress test that will identify resilient corals in that area. They also hope to have volunteer snorkelers help collect corals of opportunity from Maunalua Bay for the upcoming nursery.

“When you can get the community involved, it leads to people wanting to understand their environment and protect it,” Hughes says. Hawai‘i residents interested in volunteering, including for future restoration activities on other islands, can sign up at the Restore With Resilience project website. “As soon as it’s safe [to return to normal operations], we want everyone’s involvement.”