Scientists work to ensure that healthy ecosystems and large-scale fishing can continue to co-exist in the Bering Sea. 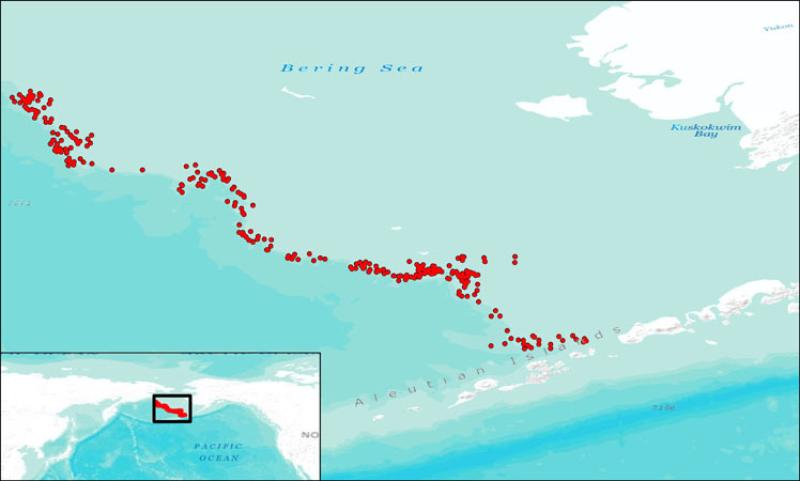 Hundreds of miles from shore in the Bering Sea, where the continental shelf begins its descent into the abyss, there is a series of vast, convoluted canyons, including some of the largest submarine canyons in the world. Hidden in and around those canyons are fragile, deep-water corals that may provide habitat for a great diversity of marine life.

At the same time, the Bering Sea is home to some of the most valuable and productive fisheries in the world. Among them is the Alaska pollock fishery, which landed 1.3 million metric tons of fish in 2012—the largest catch in the nation by far. Large as it is, that catch is sustainable. Scientists keep close tabs on the pollock population, and catch limits are set well below what the stock can support. As a result of this careful management, Alaska pollock has never been overfished.

Sustainability means more than just not overfishing, however. It also means protecting the ecosystem and its biodiversity. For that reason, the North Pacific Fishery Management Council, which regulates fishing in Alaska, is considering restricting fishing in and around parts of the Bering Sea canyons to protect sensitive coral habitats.

But the Bering Sea slope is a vast, unexplored territory, and scientists don't know where—or even if—corals occur there in dense formations. So this summer, NOAA Fisheries scientists went to sea to find out. The results of their survey will help ensure that ecosystem protection and large-scale fishing can continue to co-exist in the Bering Sea.

A Photographic Journey to the Bottom of the Sea

During a recently completed 30-day expedition, NOAA Fisheries scientists conducted the first-ever, broad-area survey looking for deep-water corals on the outer continental shelf and slope of the Bering Sea. At 250 randomly selected locations, they dropped a bug-eyed, two-lensed camera into the water and ran picture-taking transects. Scientists will use the resulting images to identify corals and estimate their abundance. Because the dual lenses produce a three-dimensional image, scientists will also be able to measure the dimensions of corals and gauge their importance as structural habitat for fish and crabs.

"The results of this survey will vastly increase our understanding of the distribution and abundance of corals in the Bering Sea," said Doug Demaster, director of NOAA's Alaska Fisheries Science Center.

There have been a handful of submersible expeditions to the Bering Sea canyons before, but the areas involved are far too vast to be explored this way. Even the camera survey only managed to sample the area it covered, which at 40,000 square kilometers was larger than the State of Maryland. So instead of relying on direct observation, scientists use predictive models that generate maps showing the likelihood that corals are present in an area based on depth, current, latitude, and slope. Until now, the model scientists used in the Bering Sea was based on very limited data and produced highly uncertain results.

"The field work this summer was designed to ground-truth the model," said Chris Rooper, the lead scientist on the survey. "Where does it work? Where doesn't it work and why? And how can we modify it so it produces more reliable results?"

Once the model has been improved, it should produce maps that more reliably predict where in the Bering Sea deep-water corals occur in significant densities. If they do, the North Pacific Fishery Management Council could then use these maps to strategically target areas for protection in a way that balances ecosystem preservation with the need to harvest fish.

The Council is made up of government, industry, and academic experts, and their decision-making process is open and transparent. Although it’s too early to know what decision it will reach in this case, the Council is widely recognized as a global leader in sustainable fishery management, and it has a long history of implementing fishing restrictions to protect sensitive habitats. For instance, in 2006 the Council created a series of six marine protected areas around the recently discovered and magnificent Aleutian Islands coral gardens.

From an operating station on deck, Rooper used a joystick to control the camera's altitude, flying it about 2 meters above the bottom while avoiding boulders and other obstacles.

Rooper and his colleagues began each day at 6:30 in the morning and worked until 9:00 at night. Even though the 30-day field expedition has ended, the real work has only begun. Scientists will spend much of the next 9 months analyzing the images, identifying, counting, and measuring every coral, sponge, sea whip, crab, and fish they see.

"It can take 2 days to analyze a single transect when a lot of animals show up," Rooper said. In all, he and his colleagues will analyze nearly 225,000 images. They expect to submit their final results, and a new and improved model for predicting coral abundance in the Bering Sea, to the North Pacific Fishery Management Council next June.

That might seem like a long time to wait, but scientific information from the survey is necessary to ensure that ecosystem protection and large-scale fishing can continue to co-exist in the Bering Sea.

“If you want to protect sensitive habitats in the ocean,” Rooper said, “you have to know where they are.”