So what’s the big deal about successfully growing Arctic cod in a laboratory? It represents another step forward toward understanding how these “bellwether” fish in the Arctic marine ecosystem may fare with a warming ocean and climate change.  It also opens up a new frontier to study cod development in a laboratory setting. Up until now, this type of research was restricted to the short, ice-free summer period in the Arctic.

Egg-bearing Arctic cod in bucket. Scientists were able to extract eggs from mature fish and successfully rear them in a laboratory setting. This is a big deal because now scientists will be able to learn a lot more about Arctic cod spawning, which has been difficult to study, as much of this activity occurs during winter months under the Arctic ice.

Arctic cod are a key component of the Arctic marine ecosystem. They provide an important food source for seabirds, ringed seals, narwhals, belugas and other fish. Compared to other cod species, Arctic cod are energetically the richest in fat content. However, new research by NOAA Fisheries scientists at the Alaska Fisheries Science Center shows that Arctic cod may be the most vulnerable to warming ocean waters.

“We’re seeing limited temperature ranges for Arctic cod to successfully grow and survive. Arctic cod have relatively high growth at 0°C, but are rapidly outpaced by other Bering Sea species including walleye pollock and Pacific cod above 2.5°C. The temperature tolerance for Arctic cod eggs is even narrower, where 5°C is the lethal limit compared to >12°C for these other two species,” said Benjamin Laurel, research fisheries biologist, Alaska Fisheries Science Center.

In general, Arctic marine species require colder water to survive than populations further south, but determining just “how cold” is tricky and requires specialized laboratory space to simulate the Arctic environment. Plus, there are sometimes big surprises. Laurel and co-investigator Louise Copeman from Oregon State University, found that saffron cod, another species of cod in the Arctic, can grow and survive well in water temperatures as high as 20°C. This suggests that there will be both winners and losers as the Arctic continues to warm. 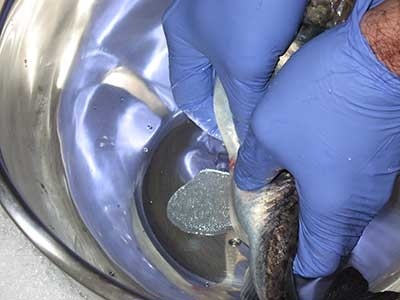 Scientists from Alaska Fisheries' Science Center extract an egg from an Arctic cod at laboratory in Newport, Oregon.

Young Arctic cod were collected during the summer months in the Beaufort Sea for three consecutive years (2012-2014). Fish were carefully collected in nets and then live-shipped via plane in small breathable bags on ice to the Alaska Fisheries Science Center laboratory in Newport, Oregon. The successful growth of these fish was largely due to carefully handling throughout the process. The Newport laboratory is also unique in that it can simulate Arctic environments to grow fish by mass chilling natural seawater pumped from the Pacific.

The first series of experiments focused on growth of juvenile Arctic cod in response to temperature and food availability. The second series of experiments, which is still ongoing, is focusing on the same factors during the egg and larval stage. At the same time tests were conducted on Arctic cod, scientists conducted comparative studies on walleye pollock, Pacific cod and saffron cod.

Successfully rearing Arctic cod in the laboratory, opens the door to learning a lot more about this species than was previously possible. For instance, scientists can get a better understanding of cod's genetic, energetic, and behavioral response to climate change and how problems like oil spills and ocean acidification may further impact the species.

Why is this Research Important?  How Does it Apply to Life in the Arctic?

In the waters that border Northern Alaska, coastal surface temperatures can already exceed 14°C in the summer. Although offshore shore temperatures are cooler, NOAA predicts temperatures in these regions will increase by 0.5°C per decade. This research suggests that Arctic cod thermal habitat is disappearing. Expansions of temperature tolerant competitor species such as saffron cod may also put additional pressure on the species.

If these northern waters get warmer, beyond the range that Arctic cod eggs and juvenile fish can compete and survive, we could see cascading effects in the marine food chain. Top predators may be forced to feed on other fish that are lower in fat content like saffron cod, Pacific cod or pollock. The loss of high quality prey like Arctic cod may make it especially difficult for ringed seals that are already contending with the loss of nursery habitat with shrinking sea ice coverage.