Northwest Fisheries Science Center Forensics Laboratory in Charleston, S.C. and its staff are playing a leading role in advancing and standardizing the science of wildlife forensics nationally and internationally. 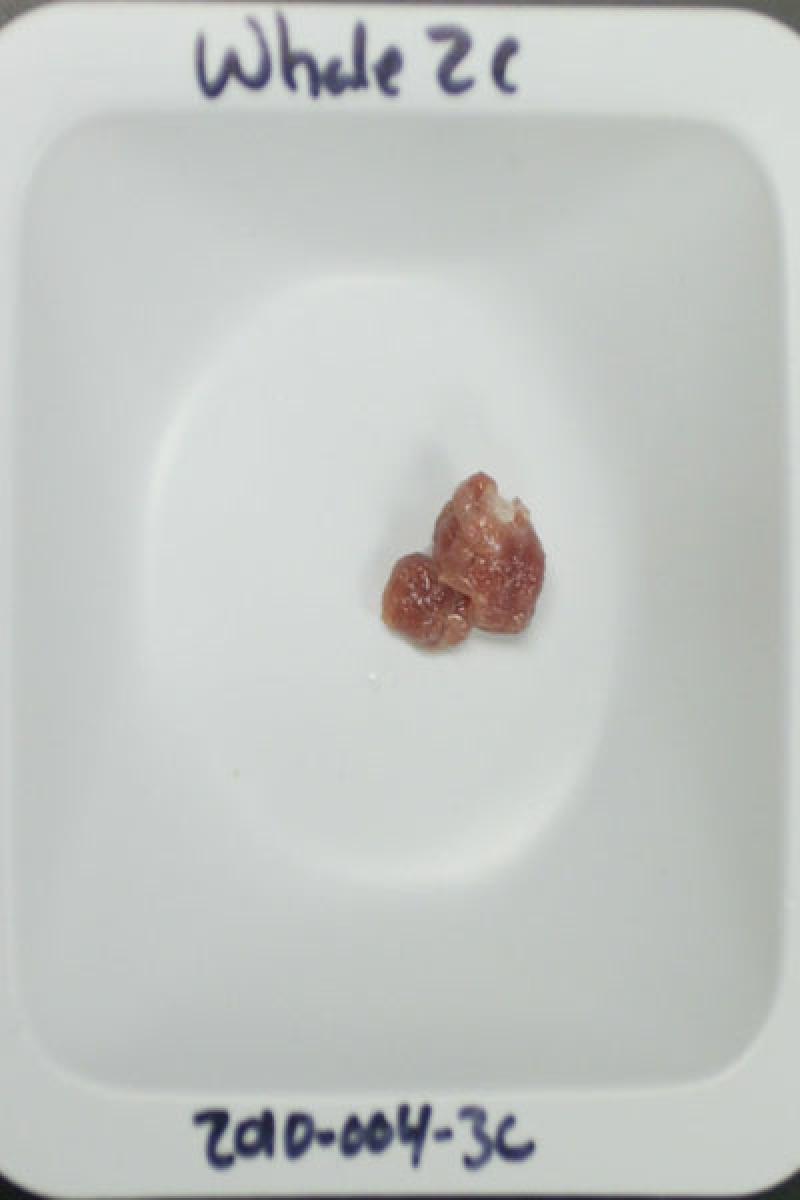 Undercover agents from federal agencies including NOAA Fisheries dining at a trendy Santa Monica sushi bar called “The Hump” ordered an unusual dish. The chef behind the counter served up a plate, acknowledging in a hushed voice that it was, in fact, whale.

The next stop for the suspect meat was across the country, at the Northwest Fisheries Science Center Forensics Laboratory in Charleston, S.C. At the time, the lab was within the National Ocean Service, but has since become part of NOAA Fisheries and the Northwest Fisheries Science Center. Through DNA testing over the following days, the lab confirmed not only that the flesh was whale meat but that at least some of it came from an endangered sei whale, and was illegal to serve.

“Forensic results for any wildlife investigation are a crucial piece of the puzzle because it verifies the identity of the species, which really cannot be done any other way,” said Michelle Zetwo, one of the special agents who investigated the case for NOAA Fisheries’ Office of Law Enforcement. “The lab is an essential part in what we do.”

A chef from the Santa Monica sushi restaurant was sentenced in early May to probation and fined $5,000 for serving the meat of federally protected whales. The supplier of the whale meat is expected to be sentenced in June.

The lab and its staff are also playing a leading role in advancing and standardizing the science of wildlife forensics nationally and internationally. NOAA Fisheries forensic biologist Kathy Moore chairs the Scientific Working Group for Wildlife Forensic Sciences, formed in 2010 to develop standards for wildlife forensics to assure that it’s rigorous and reliable.

“It’s real science, with strong scientific underpinnings,” Moore said. But a National Academy of Sciences 2009 report focusing on human forensics advocated standardized practices and accreditation of laboratories, making clear to Moore and others that “if we don’t do something to set standards for our field, someone else will do it for us, and they won’t be thinking about whether it’s appropriate for wildlife.”

Moore has taken a leadership role in developing the new standards, which have already been translated into two other languages. Other nations are looking to adopt the standards themselves and a presidential task force on wildlife trafficking recently pressed for further forensic research and standards to maintain accuracy and credibility.

“Labs are happy to have a set of goals and guidance because it is the first set of standards for wildlife forensics, and it really emphasizes the dedication to accuracy and reliability,” Moore says.

Cracking Down on Illegal and Unreported Fishing

“The human labs all work on humans as a rule,” Moore said. “When they get a sample that’s not human, their analysis usually stops. But that’s where our analysis starts – all we do is identify things that are not human. We’re typically interested not in the individual animal but the species and whether it is protected.”

Even within wildlife forensics itself, different labs have different priorities. State wildlife forensic labs may enforce different statutes and often must identify game animals killed in certain places and times for wildlife poaching cases. Federal labs, including the NOAA Fisheries lab and another operated by the U.S. Fish and Wildlife Service in Ashland, Ore., more typically identify species from animal parts or commercial goods in illegal wildlife trafficking or seafood fraud cases.

For instance, importers might label catfish grown in foreign farms as wild caught Florida grouper that commands a much higher price, ripping off both fishermen and consumers. “The forensics lab can quickly prove the discrepancy,” said Casey Brennan, chief of staff for NOAA Fisheries’ Office of Law Enforcement. “Without forensics, it would be nearly impossible to make a case.”

Such examples underscore the strength of the forensics lab in prosecuting illegal, unreported and unregulated (IUU) fishing, a priority of NOAA Fisheries and the White House. IUU fishing cases range from mislabeling of seafood to taking of protected species such as sea turtles.

“Going after IUU fishing has really created a much bigger role for forensics,” Moore said. “If you’re trying to ensure the label is correct, there’s a lot of paperwork you can look at, but eventually you have to test a sample and see what it is.”

Academic researchers have documented very high rates of mislabeling of certain fish such as red snapper, with as much as 70 percent of fish labeled as red snapper actually something else, Moore said.

Law enforcement officers typically tell the lab what species or type of animal they suspect a sample to be, which helps target the analysis. But the lab’s results rely on its genetic database with characteristic DNA patterns from different species that they can use to match up the telltale genetic code from the sample with the species it came from.

“We really have high standards for what we’re going to use in our database,” Moore said. “If you’re going to base your genetic identification on something, whatever you base it on better be really good.”

In the case of the whale meat from the Santa Monica sushi restaurant, the lab relied on its database and zeroed in on a section of the genetic code that can be used to distinguish different species of whales. That revealed the species as minke and sei whales. But the investigating agents also wanted to know how many individual whales were involved, so the lab worked with colleagues at the Southeast Fisheries Science Center to implement a test examining different DNA segments to estimate how many different whales the meat had come from.

“That’s kind of our job – to translate what law enforcement wants to know into what tests need to be done and what we can learn from them,” Moore said. At the same time, forensic specialists such as Moore must be able to clearly explain what they do to judges and juries, something the new standards and guidelines should support.

The new standards “have been well received and used so far,” Moore said. “It’s a testament to the fact that we tried to involve a lot of different labs and make sure the standards are rigorous, but also appropriate, reasonable and achievable.”