Ocean Noise: Can You Hear Me Now?

NOAA Fisheries scientists are at the forefront of bioacoustics research. Now, the recently released Ocean Noise Strategy Roadmap will ensure their work is supported for years to come. 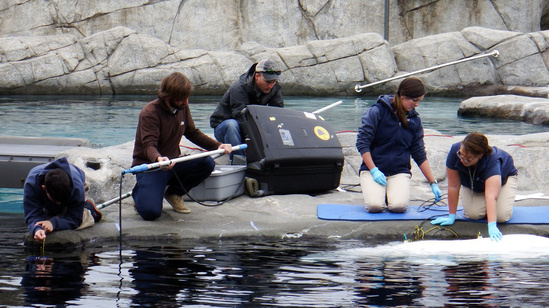 Thirty years ago few research papers existed describing the calls produced by gray whales. Those in existence noted that gray whales were typically silent or produced few if any calls.

So when Alaska Fisheries Science Center biologist Marilyn Dahlheim traveled to Laguna San Ignacio on the west coast of the Baja Peninsula in the early 1980s to record ambient noise in the lagoon for her Ph.D., she didn’t expect to capture any calls produced by gray whales.

What she discovered surprised her. “I recorded hundreds and hundreds of calls produced by gray whales,” said Dahlheim.

Her next finding was even more unexpected. “When I was editing the tapes,” she said, “I found some of the best recordings of gray whale calls occurred when boats were operating nearby or when sound playbacks occurred. Results indicated that when exposed to a variety of projected sound sources or when boats were present in the area, gray whales were documented to change the structure and timing of their calls.”

The fact that gray whales were producing numerous calls was enough of a breakthrough. But the idea that they could alter their calls in response to man-made noise was unheard of.

Dahlheim was onto something.

Thirty years passed and Dahlheim’s work went unpublished. Her research focus shifted after obtaining her Ph.D. “People were aware of this study and for the past few years they’ve been encouraging me to publish it,” she said. So she did.

Dahlheim teamed up with fellow AFSC biologist Manuel Castellote to co-author a paper on gray whales. That paper arrives now at an interesting juncture in the field of ocean acoustics research. NOAA Fisheries recently placed a great deal of emphasis on ocean noise and bioacoustics research when it released its Ocean Noise Strategy Roadmap, which aims to assess ocean noise in the 21stcentury. On top of that, Dahlheim’s paper was featured in a special issue of “Endangered Species Research: 21st Century Paradigms for Measuring and Managing the Effects of Anthropogenic Ocean Noise,” in which all the featured papers focus on ocean noise and its impacts on marine mammals.

The main message from these papers: Ocean noise poses a real threat and it’s not only marine mammals that are affected. “Crabs can become disoriented, reef wildlife is impacted, invertebrates, fish, all sorts of taxa are affected. There are many forms of life that depend on sound to survive,” said Dahlheim.

For example, in the Greater Atlantic region, NOAA Fisheries biologists have been researching Atlantic cod vocalizations to better protect the winter spawning stock in the Gulf of Maine and Massachusetts Bay.

Scientists listen for the cod “grunt”—a noise distinct to the species—using a bottom-moored telemetry grid and a pair of autonomous surface gliders. By tracking grunt frequency, the scientists can audio tag individual fish and determine peak spawning periods. (Cods grunt during other times of the year, too, but they grunt more during spawning time; also, grunting increases at night.)

Knowing these details about cod reproduction and distribution will help NOAA Fisheries set effective management policies now and in the future. The same goes for marine mammals. Knowing where they are in relation to human activity and knowing how they’re impacted by the sound of that activity is necessary to better conserve these protected species.

Improved and more readily accessible technologies (like telemetry grids and autonomous gliders) are part of the reason ocean acoustics research is experiencing a renaissance. In fact, much of the technology used today to research marine mammal responses to ocean noise grew out of technology originally purposed for Cold War military use (e.g., identifying torpedo sounds and detecting and localizing submarines with sonar).

“This technology slowly became accessible to scientists,” explained Castellote. “By the late 1970s and early 1980s this type of [bioacoustics] research was just beginning. I think there was only one paper in the late 1970s proposing that human noise was impacting whales at all.”

“The type of equipment used for this research has also changed quite a bit in the last 30 to 35 years,” said Dahlheim. “The biggest change is analog versus digital audio recorders. Back then everything was done with analog tape recorders. And the analysis equipment is totally different from using a pair of dividers and a hand calculator.”

“We are mixing acoustics into the field of physiology,” said Castellote. “We attach suction cup electrodes (the same kind that are put on infant children at hospitals) to the beluga’s head and we expose the whale to noise playbacks such as pre-recorded ship noise. This procedure allows us to measure the consequences of masking noise on beluga hearing. The masking noise is very well controlled. We know the exact frequency composition and volume exposed to the whale.” 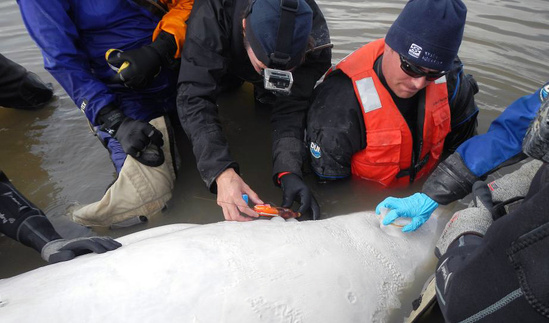 This technique was initially developed for human hearing research, but Castellote and others have adapted it for marine mammals and the marine environment. He explained: “We send a faint sound stimuli signal through water and we raise the volume until we start receiving a brain wave activity response from the animal in response to the sound—that sets the acoustic hearing threshold for that sound. We do that at different frequencies to obtain an audiogram for that animal. Then we expose the whale to noise while measuring again these hearing thresholds to document the change.”

Castellote and collaborators are finding that the belugas have very sensitive hearing that is easily masked by noise below currently regulated levels.

That’s troubling news for wild beluga populations, especially the endangered Cook Inlet stock, which faces a noisy environment due to increasing human noise from nearby ship traffic, construction projects, and military, oil, and gas activities. Their future may rely on the successful implementation of the Ocean Noise Strategy Roadmap.

“The ocean is not a quiet place. It’s never been a quiet place,” said Jason Gedamke, Director of the Ocean Acoustics Program for NOAA Fisheries’ Office of Science and Technology and one of three co-leads for the Ocean Noise Strategy Roadmap.

“There’s been animal noise, crashing waves, lightning and earthquakes, and for millions of years marine life evolved to live in this natural, underwater acoustic environment,” said Gedamke. “But in very recent history, with rapid increases in human activities in the oceans, anthropogenic noise has become pervasive. Since the advent of the industrial age we’ve been adding increasing amounts of noise into the oceans, causing large-scale alterations of oceanic soundscapes in a short fraction of time on evolutionary scales, and we don’t know how these changes are going to impact [marine life]. This is why [the Roadmap] is important.”

Gedamke explained that the Ocean Noise Strategy Roadmap grew out of an earlier NOAA effort known as CETSOUND (Cetaceans and Sound). CETSOUND was the result of a 2010 NOAA commitment to improve the tools NOAA used to manage acoustic impacts on cetaceans. Two CETSOUND working groups, CetMap and SoundMap, produced tools to map density and distribution of cetaceans, identify areas of specific importance (such as breeding or feeding grounds), and predict noise levels over small to large scales arising from human activities (e.g., shipping and seismic surveys). Scientists can use the mapping products in conducting risk assessments to determine locations where large numbers of marine mammals may be more likely to encounter elevated levels of man-made noise.

Last updated by Office of Communications on November 05, 2018