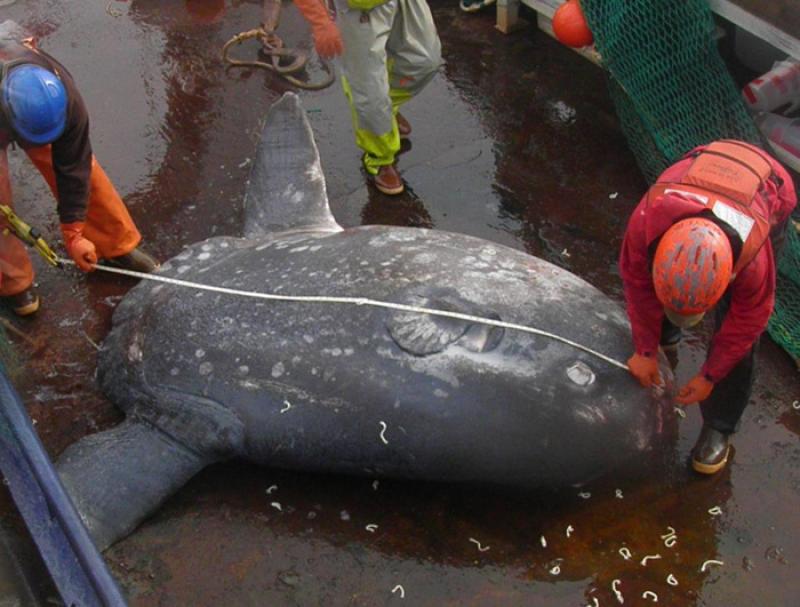 The emerging El Niño climate pattern that is warming the tropical Pacific Ocean is likely to continue–and could even increase–the appearance of marine species in unfamiliar places along the West Coast. This trend started with a vast "warm blob" of high temperature waters that has dominated the Northeast Pacific since 2014.

Previous El Niños coincided with large-scale redistribution of some West Coast marine mammals, fish and sea turtles. The combination of an anticipated strong El Niño and the blob may do the same, possibly in new and different ways, NOAA Fisheries researchers say.

"One of our big questions right now is, how can we best link observed changes in species distributions to changing environmental conditions?" said Dave Weller of the Southwest Fisheries Science Center in La Jolla, California. Weller is chief scientist for the ongoing Collaborative Large Whale Survey, a joint survey for whales off the West Coast and Southeast Alaska by the SWFSC and Alaska Fisheries Science Center.

"We need to be clever about it in terms of using a range of observations and having eyes on the water in the form of ship surveys like this can really help," Weller said.

NOAA Fisheries scientists have been tracking the blob since last year and are cooperatively following continued changes in ocean conditions through at-sea surveys, remote sensing and automated monitoring to understand how the changes are affecting marine ecosystems.

Already in the last month the survey spotted about 25 pilot whales around 50 miles off the Central California Coast. Pilot whales were once common off Southern California but largely disappeared following a strong El Niño pattern in the early 1980s. In the last few years pilot whales have begun to trickle back into the area, a sign they may be starting to reoccupy former habitat.

"This recent uptick in pilot whale sightings may be related to the warm blob's influence," Weller said. "If we pay close attention to the animals, they're telling us something about changes in their environment. We now need to connect the puzzle pieces." Scientists are also investigating connections between the blob and a harmful algal bloom along the West Coast that may be a factor in an unusual number of whale deaths in Alaska.

Rockfish surveys conducted by the SWFSC in May and June already showed the likely influence of warm water from the blob, turning up large catches of species typically seen during strong El Niño periods, and some never before seen in the survey. They included record high catches of pelagic red crabs and California spiny lobster, and the survey's first-ever catches of warm-water species including greater Argonaut (a swimming octopus with a shell), slender snipefish and subtropical krill.

Offshore surveys by the AFSC pulled in warmer-water species including two large ocean sunfish and market squid, species which have not been seen in the prior 18 years of sampling, said Joe Orsi of the AFSC's Auke Bay Laboratories. Other warm-water species reported from Alaska recently include albacore, bonito and yellowtail.

"This El Niño is liable to bring some really strange changes in ocean conditions because the widespread warming of the North Pacific we saw with the blob was so far outside of our experience," said Northwest Fisheries Science Center oceanographer Bill Peterson. "When you put an El Niño on top of that it is anyone's guess as to how this will affect marine organisms." He tracks types of plankton off the Central Oregon Coast for insight into ocean conditions. He expects a new surge of warm-water plankton as the tropical El Niño begins to influence Oregon waters this fall.

Salmon and other species that thrive in cold water often do poorly in warm years, especially strong El Niño years, he noted, while species such as sardines that favor warmer water could do better.

El Nino vs. the blob

Now another key question is how the tropical El Niño and the blob may interact as El Niño gains strength and begins to affect the West Coast this fall and winter. In terms of size, El Niño far exceeds the blob and is expected to pummel the blob with storms that will likely break up the blob and push its warm water up along much of the West Coast, said Nate Mantua, leader of the SWFSC's Landscape Ecology Team.

That will likely make this the third winter in a row with record-high coastal temperatures that affect both marine ecosystems and the coastal climate. El Niño typically shifts the jet stream in a way that redirects storms from the Pacific Northwest to Southern California instead.

"Because we're starting from an exceptionally high baseline temperature this could take us further into uncharted territory in terms of effects," Mantua said.

He said there is potential for the warm coastal temperatures to "supercharge" storms spawned by El Niño. Since warmer air holds more moisture storms may carry greater precipitation ashore, which could lead to more intense deluges on land. That could multiply the impacts of this summer's large wildfires by pouring water on recently burned slopes.

"If you put heavy rains on that, you can get mudslides, debris flows, rapid runoff and other serious impacts," Mantua said.

California sea lions will likely continue to struggle as the warm water temperatures lead to shifts in prey, he said. Record numbers of starving sea lion pups stranded on Southern California beaches last winter and spring as their mothers had a harder time finding food near their rookeries in the Channel Islands.

Investigations of the sea lion strandings by AFSC researcher Sharon Melin and others found that adult females could not maintain enough lactation to support normal pup growth. In July 2015 AFSC biologists recorded declines in the number of sea lion pups born on San Miguel and San Nicholas islands, another sign of nutritional stress in the population.

Mantua noted that El Niño effects extend far beyond the West Coast of North America. Dry conditions in Central America have already led to restrictions on the size of ships that can transit the Panama Canal because of lack of water, for instance. Meanwhile heavy rains are falling in the Peruvian desert.

"This El Niño will likely cause extreme climate events in different parts of the world for the next six to nine months," Mantua said.

The way that El Niño interacts with the warm blob may depend on the depth and extent of the blob's warm water, which remains something of a mystery, said Toby Garfield, director of the SWFSC's Environmental Research Division. If it's shallow, it should dissipate quickly. But if it's deeper, the larger volume of water may hang on longer.

"How much heat does it hold and how that volume of hot water out there may or may not change things, those are the questions everyone's asking right now," Garfield said. "This is going to be a very interesting winter coming up and many scientists and communities will be working hard to anticipate and prepare for changes in the ocean and atmosphere."

Marine scientist are mobilizing partnerships to make the most of ocean monitoring instruments along the West Coast. New instruments such as autonomous gliders that survey ocean conditions may offer opportunities to gather marine data that was not available during previous El Niños, Garfield said.

A rockfish among deep-sea red tree corals at a study site in the Gulf of Alaska. Credit: Alaska Department of Fish and Game ROV Team.
More News