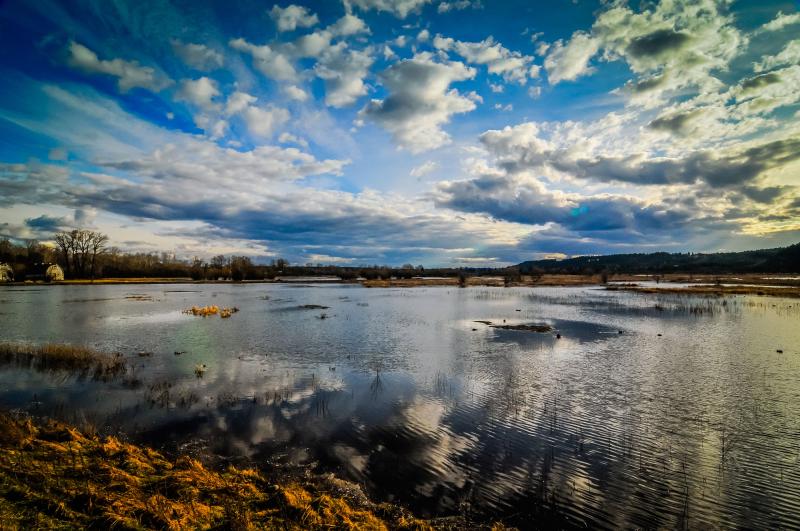 Nearshore waters in the tidal estuary where the Nisqually River enters Puget Sound.

No habitat in Puget Sound is more valuable to threatened Chinook salmon than nearshore habitat. No habitat is more degraded, either.

Nearshore habitat is shorthand for tidal marsh, wetlands, and river estuaries where land and water combine to support life of all kinds, from shorebirds to juvenile salmon and steelhead. Juvenile Puget Sound Chinook salmon spend their first critical months in saltwater feeding and growing in the sheltered water of nearshore habitat.

Their growth in that pivotal window determines in large part whether they will make it back to rivers as adults to spawn. With nearshore habitat dwindling, most do not.

When reviewing projects, NOAA Fisheries is updating its efforts to avoid further losses of nearshore habitat.

“It is important for projects to have a path forward, while we also need to stem the losses of this habitat that we have already lost so much of,” said Kim Kratz, Assistant Regional Administrator in NOAA Fisheries West Coast Region.

More than 95 percent of the most valuable nearshore habitat in Puget Sound is gone and is especially scarce in the south Sound, according to an analysis by the Puget Sound Nearshore Ecosystem Restoration Project. Scientists described it as a “dramatic change in the historic occurrence [of] these once-prominent nearshore ecosystems.”

Fewer than one percent of Puget Sound Chinook salmon juveniles that migrate to the ocean each year survive to return as adults. That means that already imperiled populations continue to decline. There are also repercussions for other species such as endangered Southern Resident killer whales that depend on them for food.

Recovery plans developed under the Endangered Species Act for listed salmon and steelhead in Puget Sound call for protecting and restoring nearshore habitat. However, the first step is to avoid further losses as shoreline development and maintenance projects continue to support the region’s growth and economy.

The U.S. Army Corps of Engineers permits projects such as the construction or replacement of docks, marinas, and bulkheads. That is a federal action that could affect species listed under the Endangered Species Act. If it does, NOAA Fisheries must review their impacts on the species. The reviews have found that some projects affect nearshore habitat to the point that they jeopardize the survival of Puget Sound Chinook salmon and the Southern Resident killer whales that depend on those salmon as prey. Some projects also adversely modify the designated critical habitat of both species.

In such instances, NOAA Fisheries recommends conservation offsets. In recent Endangered Species Act consultations in Puget Sound, we have asked project proponents to reduce their impacts on nearshore habitat or offset those impacts by sponsoring restoration efforts on their own property or elsewhere in Puget Sound. The goal is to provide for development while avoiding further losses of nearshore habitat, Kratz said.

NOAA Fisheries will provide technical assistance as needed to help project proponents evaluate their options for moving their projects forward.

NOAA Fisheries has developed a science-based “conservation calculator” to objectively estimate the value of lost habitat to species. Informed by the latest research, the calculator determines how many habitat credits would offset a project’s impacts on the threatened and endangered species.

Project proponents have choices to reduce or offset their impacts. They can adjust their plans to include beneficial steps such as removing toxic creosote pilings or seawalls that cut off tidal waters. Those improvements help offset impacts.

If that is not possible, they can also purchase credits from conservation banks to offset the remaining impacts. That would avoid a net loss of nearshore habitat.

Conservation banks can assist project proponents in offsetting habitat impacts. Although not widely known in Puget Sound, conservation banks have proven successful elsewhere on the West Coast. The banks fund restoration of nearshore habitat and then sell shares of those habitat improvements as “credits” to help offset development elsewhere.

The approach provides flexibility for projects to move forward while also conserving nearshore habitat that is vital to salmon and Southern Resident killer whales. These species are culturally and economically important to the region. Research has found that juvenile salmon often quickly move back into restored nearshore habitat, seeking food and refuge before they migrate to the open ocean.