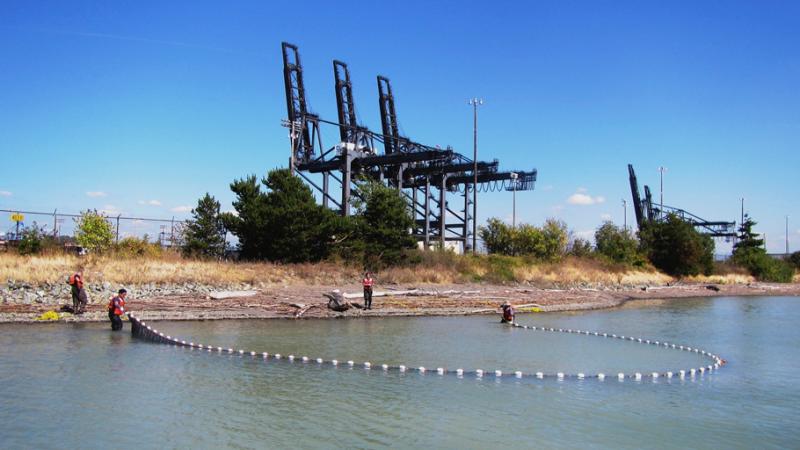 A new study of emerging contaminants entering Puget Sound in wastewater plant effluent found some of the nation’s highest concentrations of these chemical compounds, and detected many in fish at concentrations that may affect their growth or behavior.

The study by scientists from NOAA Fisheries’ Northwest Fisheries Science Center and the University of Washington tested for 150 of the contaminants and detected 81 of the compounds in wastewater flowing into Puget Sound estuaries. They include pharmaceuticals such as the antidepressant Prozac and the diabetes medication metformin, personal care products such as antibacterial compounds from soap and industrial chemicals.

The study also examined juvenile Chinook salmon and Pacific staghorn sculpin, both fish native to Puget Sound, and found 42 of the emerging compounds in their tissue. Some of the compounds such as fluoxetine (also known as Prozac), the diabetes drug metformin and the antibacterial compound triclosan were present in fish tissues at levels that may be high enough to adversely affect their growth, reproduction, or behavior.

“There’s also the problem of not knowing how these chemicals act in fish when they are found together as a mixture,” said James Meador, a NOAA Fisheries research scientist and lead author of the research published this week in the journal Environmental Pollution. “Mixtures such as these may result in responses that occur at lower concentrations than single compounds alone.”

The research did not examine the potential effects on human health of consuming fish from Puget Sound, and it is unknown if these levels of emerging contaminants detected in fish could affect people.

The study funded in large part by the Washington Department of Ecology examined wastewater plant effluent, estuary water, and fish found in the Puyallup River estuary in Tacoma’s Commencement Bay, Sinclair Inlet in Bremerton, and the Nisqually River estuary near Tacoma. The Nisqually estuary was included as a reference site because it does not have a major wastewater treatment plant and has been used historically as a reference site for toxicity studies. Unexpectedly, they found that fish and water in the Nisqually estuary also contained high concentrations of some emerging compounds.

The study also noted that the relatively high pH of seawater often makes the contaminants more bioavailable and therefore more likely to be absorbed by marine fish compared to fish in freshwater, Meador said.

The researchers noted that since the two major wastewater treatment plants they examined in the Puyallup and Sinclair Inlet discharged a total of 71 million liters per day, “it is possible that a substantial load of potentially harmful chemicals are introduced into streams and nearshore marine waters daily.” If the two wastewater plants sampled in the study are representative of others around Puget Sound, the researchers calculated that nearly 300 pounds of the emerging contaminants likely enter Puget Sound every day.

“When you add it all up, you get millions of gallons of effluent discharging into these estuaries,” Meador said. “This is right in the area where juvenile salmon and other fish are feeding and growing.”