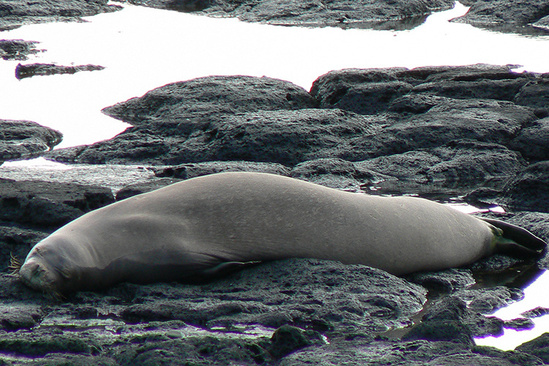 The monk seal of the month for June is R006, also known as Mama Eve.

At first glance, the Hawaiian monk seal R006 appears unremarkable. She looks a lot like most adult monk seals and has just a few scars over her body that help distinguish her. But upon closer inspection, her history reveals just how special she is and the important role she played in the growth of the monk seal population in the main Hawaiian Islands.

R006 was first seen in 1996 on the island of Moloka‘i, which is an ideal home for monk seals given its rugged and remote coastlines, small human population (about 7,400 people), and proximity to rich foraging grounds. At that time, she was already a fully grown adult, meaning she was likely at least 5 years old. It's a mystery where she was born or where she came from prior to her appearance on Moloka‘i.

In 1997, R006 gave birth to her first pup along the Kalaupapa Peninsula, located on the north coast of Moloka‘i. This pup was only the second known to be born on Moloka‘i and the first known to be born at Kalaupapa. Local residents nicknamed R006 "Mama Eve," a moniker that showed remarkable foresight considering R006's eventual legacy.

The Kalaupapa Peninsula is a historic place in Hawai‘i. In 1865, the Hawaiian Kingdom designated the peninsula a "forced quarantine" settlement for people with Hansen’s disease, or leprosy. At the time, this affliction was incurable — and remained so until the 1940s — and spread throughout the people of Hawai‘i. Kalaupapa was chosen to isolate people with the disease for several reasons. For one thing, it was remote and fairly inaccessible by land, being separated from the rest of the island to the south by cliffs nearly 2,000-feet high and surrounded by water on all other sides. And with fresh water and land suitable for growing various crops, it had been inhabited for a long time.

From 1866 to 1969, over 8,000 patients disclaimer external link afflicted with Hansen's disease lived a life of forced quarantine at Kalaupapa. In 1980, Kalaupapa Peninsula became a National Historical Park. A few now-cured patients still voluntarily reside at Kalaupapa, and the population there today is just under 100 people, which includes former patients, volunteers, and government employees. 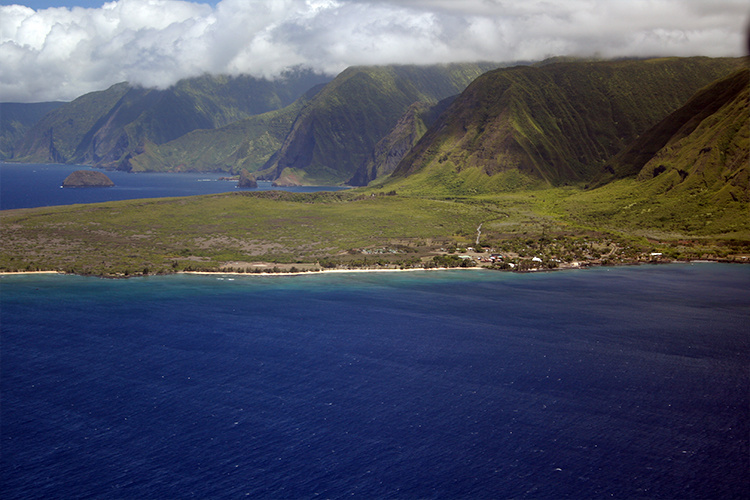 View of the west side of Kalaupapa Pensinsula and adjacent sea cliffs.

While Hansen's disease patients were forced to live at Kalaupapa, monk seals have freely chosen this location to give birth and rear their pups. Since Mama Eve's first pup in 1997, 100 more pups were born along the beaches of Kalaupapa. Long-time residents of Kalaupapa said they had not seen a seal pup prior to 1997 and had not seen any seals on the beaches prior to the 1990s.

The seals primarily rest and give birth along two sandy beaches located on the west side of the peninsula, one of which is called ‘Īliopi‘i, or "climbing dog" in Hawaiian. Interestingly, the Hawaiian name for monk seal is ‘īlio holo i ka uaua, which can be translated as "dog that runs in rough seas." Does this suggest monk seals had a longer history at Kalaupapa than modern records indicate? 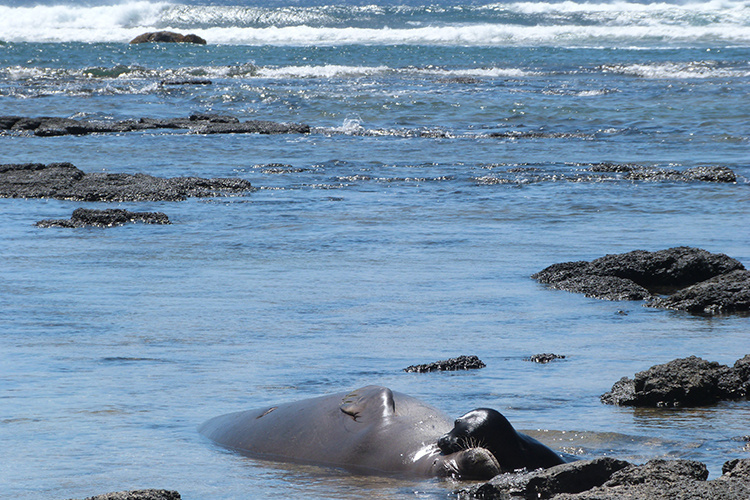 Mama Eve (R006) relaxing with one her pups at Kalaupapa.

What makes Kalaupapa such a desirable place for pupping?

Throughout the Hawaiian Islands, monk seals usually choose to give birth in places with sandy beaches adjacent to very shallow waters. Pups begin entering the sea within a few days of birth and monk seal mothers improve their naÏve pups' chances of survival by choosing beaches next to extensive shallow reef areas. Here, pups can explore and learn to swim without the threat of large sharks, big waves, and strong currents. The beaches on the west side of Kalaupapa offer a shallow reef extending several hundred feet offshore. Used primarily by moms with pups and few other seals, these beaches are relatively drama-free. Also, with its small permanent human population and strict limits on visitors (no more than 100 visitors are allowed per day), Kalaupapa is an area where seals can rest in peace, free of human disturbance.

Female monk seals often return to pup near where they were born. Indeed, all of Mama Eve's surviving daughters and granddaughters have returned to Kalaupapa to have their own pups, and a few other seals not born there have also chosen to give birth at Kalaupapa. 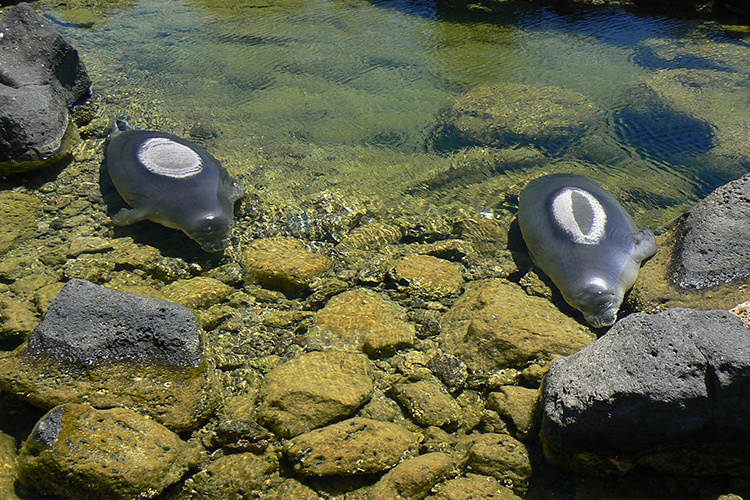 Two weaned pups enjoying one of the shallow, safe tide pools at Kalaupapa.

Though Kalaupapa is a perfect place for monk seals to be born and nursed, pups must fend for themselves after they wean at 5 to 7 weeks of age. Fortunately, another favorable feature of Kalaupapa is that it's just around the corner from a large chunk of ocean habitat that's also ideal for monk seals: Penguin Bank. This extensive underwater remnant of a shield volcano extends to the southwest of Moloka‘i and is roughly the same size as the island itself. Most of the submerged bank is less than 300-feet deep, which is right in the depth range where monk seals typically dive for their bottom-dwelling prey. Many of the pups born at Kalaupapa are later seen along the southwestern shore of Moloka‘i, where they can enter the sea and quickly swim to this excellent foraging area. 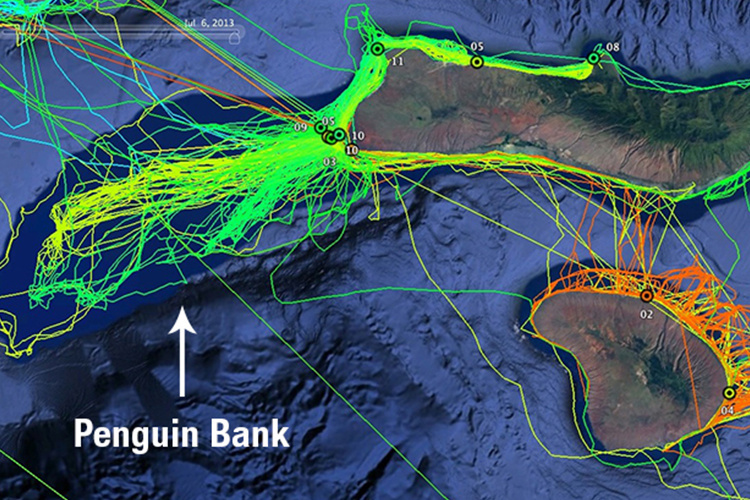 Foraging tracks from multiple seals that reside on the island of Moloka‘i. Every seal tracked on the island regularly used Penguin Bank, a shallow bank stretching out to the southwest from Molokai, indicating it is prime monk seal feeding habitat.

Over her lifespan, Mama Eve gave birth to 14 pups and gave rise to three generations of monk seals. We can trace 56 seals back to Mama Eve: 14 pups, 28 grand-pups, and 14 great grand-pups. All but one of these seals were born at Kalaupapa, and Mama Eve's granddaughter RI15 is the youngest monk seal known to give birth (at just 4 years old). R006 has truly made a significant contribution to the monk seal population in the main Hawaiian Islands. And while we have not seen Mama Eve since 2014, we know that her legacy lives on in the generations of monk seals after her and hopefully in many more generations to come.