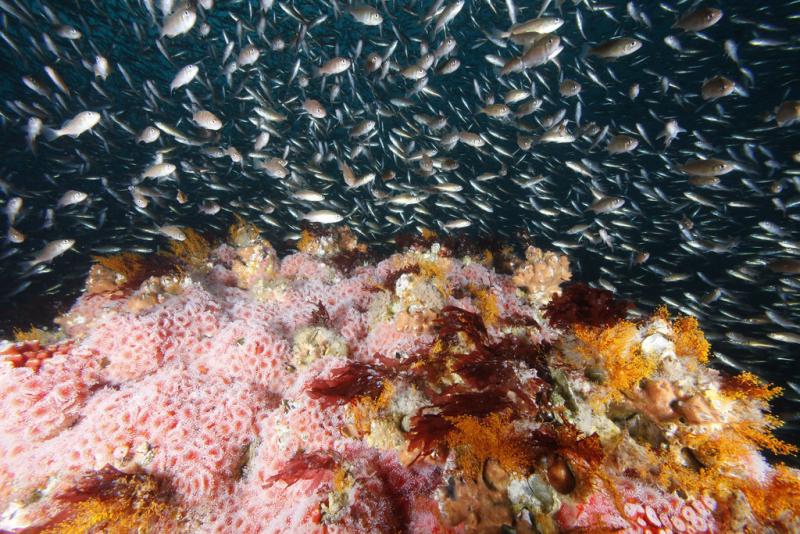 The changes come in the form of an amendment to the Fishery Management Plan for groundfish off the West Coast. The Pacific Fishery Management Council (Council) recommended the amendment to NOAA Fisheries, which finalized it this week. The new provisions take effect January 1, 2020, and are widely supported by fishermen and other stakeholders.

The changes affect what is known as Essential Fish Habitat, or EFH, the habitat necessary to support sustainable fisheries. By law, the Council must minimize effects on EFH, and in 2005 did so for groundfish habitat. It established area closures that limited bottom trawling and other types of gear that contact the sea floor.

A review of the latest science and fishing results led the Council to increase protections for EFH in some places. It also reopened some important fishing areas that had been closed.

The new protections put about 13,000 square miles of deep-sea reefs, corals, and sponges off-limits to bottom trawling that can impact sea-floor habitat. The area is larger than the state of Massachusetts, and includes the Southern California Bight between San Diego and Santa Barbara. At the same time, the new action reopens nearly 3,000 square miles that had been closed to bottom trawling for groundfish.

Fishermen worked with conservation groups including the Environmental Defense Fund, The Nature Conservancy, and Natural Resources Defense Council. They refined the details during years of talks in fishing communities up and down the West Coast. “We worked together to come up with a solution, instead of having it done for us,” said Tom Libby, an Astoria, Oregon, seafood processor who helped develop the revisions known as Amendment 28.

“Without this process and the trust that was built, the end result would likely have been much clunkier closures and openings and significantly less consensus on the final outcome,” Jud said. “This was one of the most gratifying processes I’ve been involved in during my time at the Council. It’s a true win-win outcome that everyone can be incredibly proud of.”

“It’s the first time we really sat down and talked to each other,” said Nick Edwards, a Coos Bay, Oregon, fisherman who joined the talks. “It’s one of those Cinderella stories that never happens—but this one did.”

West Coast groundfish are a key player in the blue economy, contributing $569 million in personal income benefits to West Coast communities. Recreational anglers from Washington to Southern California took nearly 1 million boat trips in pursuit of groundfish from 2012 to 2016, according to the Council.

The amendment recognizes the rebuilding of many West Coast groundfish species that NOAA Fisheries declared overfished around 2000. Many vessels quit the fishery and those that remained switched in 2011 to catch shares management. Through this system, fishermen each get a specific annual quota of fish to catch instead of racing to catch as many fish as possible.

Fishermen can also buy and trade shares of their quota, and all catches are recorded to ensure fishermen are accountable for what they bring in and discard at sea. Catch shares management has helped promote responsible fishing and reduce bycatch, preserving the marine ecosystem, and supplying consumers with a wild and natural food source. Almost all the overfished stocks are now rebuilt, many of them decades ahead of expectations.

The improvements allow NOAA Fisheries to reopen about 2,000 square miles of a large Rockfish Conservation Area off California and Oregon. The area had been off-limits to groundfish bottom trawling since 2002. That will give fishermen more flexibility in how and where they fish, while ensuring that catches remain sustainable.

“There is something here for everyone, and it is possible only because many fishermen sacrificed and participated in the planning to bring the groundfish fishery back,” said Ryan Wulff, Assistant Regional Administrator for Sustainable Fisheries in NOAA Fisheries’ West Coast Region. “This will provide more flexibility for a fishing fleet that has demonstrated its responsibility, and at the same time protect deep-water habitats that we are only beginning to learn about.”

The measures also close U.S. waters deeper than 3,500 meters (2.2 miles) to fishing with gear that contacts the bottom. This affects another roughly 123,000 square miles, an area larger than the state of Oregon.

Only in the last 20 years have scientists recognized and documented deep-sea coral ecosystems covering large areas of the sea floor off the West Coast. These ecosystems, which will be protected under the amendment, are home to unusual species—some may hold biomedical value to treat disease, for instance.

The closure to bottom-contact gear will also protect important habitat features. These include submarine canyons, seamounts, and methane seeps that support a variety of unusual marine species.

The deep-water closures are not anticipated to affect fishing because little fishing occurs in the protected areas now. The fishing that does occur there does not contact the bottom. The protections are precautionary, and are authorized under the Magnuson-Stevens Act to safeguard deep sea coral ecosystems.