Learn about the heroic efforts to rescue and recover cold stunned sea turtles in Texas. 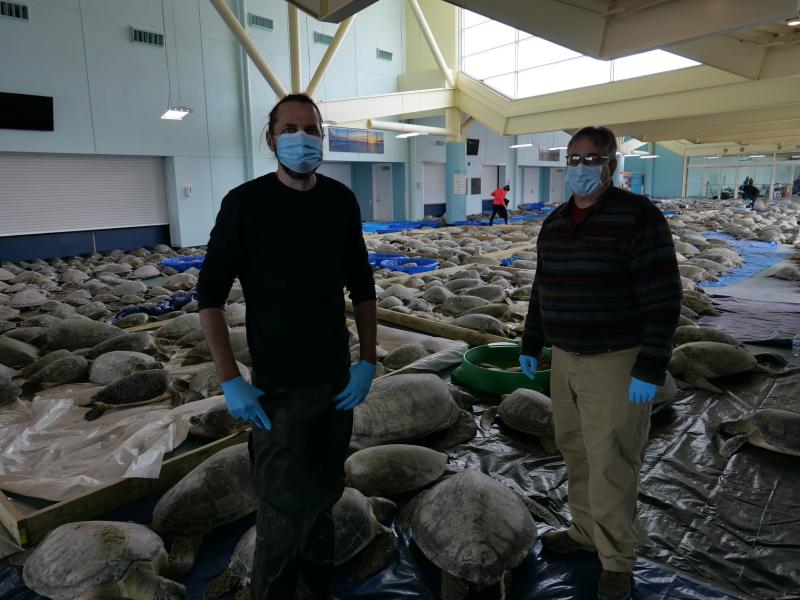 The recent historic winter storm put much of the United States into a deep freeze. The cold snap stunned thousands of sea turtles in Texas. A massive statewide effort to save these threatened and endangered animals began on Valentine’s Day weekend. The extreme weather caused power outages across the state leaving some of the sea turtle rehabilitation facilities in the dark and cold. The South Padre Island Convention Center opened their doors and temporarily housed more than 5,000 turtles. In total during the cold stun event, nearly 11,000 sea turtles were recovered statewide, almost all of which were green turtles. It is important to release these turtles as soon as possible after they recover. Once rescued, many turtles recovered and were ready for release. Water temperatures a few miles off the Texas coast warmed, and the effort shifted to safely releasing turtles in these areas.

The Marine Spill Response Corporation generously donated the use of the Southern Responder, a 210-foot oil spill response vessel. The U.S. Coast Guard, Texas A&M University, and private vessel owners also generously provided vessels. These partners assisted with safely transporting and releasing more than 3,000 green turtles. Some turtles will remain in the care of rehabilitation facilities and will be released when they fully recover. NOAA Fisheries is indebted to everyone who came together to rescue these vulnerable animals.

The heroic efforts to rescue, rehabilitate, and release thousands of sea turtles would not have been possible without the dedication and support of:

What Is Cold Stunning?

Cold stunning happens most commonly in certain coastal areas of the U.S. Atlantic and Gulf of Mexico. In general, cold stunning follows winter weather that causes sudden and prolonged decreases in water temperature. The characteristics of water bodies also plays a role. Cold stunning is most likely to occur in shallow bays and lagoons where water temperatures can fall relatively quickly and where access to warmer water is limited or obstructed by the surrounding land.

Are We Seeing More and Larger Cold Stun Events?

Cold stun events are not a new phenomenon. They were first reported in the late 1800s in both Texas and Florida and are among some of the earliest accounts of sea turtles in the United States. In the modern era, cold stunning has been documented intermittently in the U.S. These events have increased in frequency and number of turtles affected in the past decade. While we are beginning to see evidence of recovery for the Northwest Atlantic green turtle population, large scale mortality events such as extreme cold stunning can hamper recovery progress.

Climate change may be playing a role in more frequent and more intense cold stunning events. Water temperatures that remain warmer later in the year may result in turtles staying in vulnerable areas longer than normal and being “trapped” when cold temperatures arrive. In addition, more extreme cold weather events may be more common due to climate induced changes in weather patterns.

How Do NOAA and Our Partners Help Cold Stunned Sea Turtles?

Cold stunned sea turtles require help to recover, and to protect them from further harm. These efforts may include a short stay in captivity until waters warm enough for them to be released nearby or transport to a warmer location for release. Severely affected turtles often require veterinary care and longer-term rehabilitation before they can be returned to the wild.

We have a well-established network of government agencies, wildlife organizations, aquaria, zoos, and volunteers that come together to help sea turtles during cold stunning events. This network actively plans for cold stunning events and has alert systems to help organize and deploy people to look for and rescue cold  stunned turtles.

Please remember that all sea turtles are threatened or endangered under the Endangered Species Act; a permit is required to work with them.

What Do I Do if I See a Sea Turtle Stranded or in Distress?

Last updated by Office of Protected Resources on February 26, 2021