Researchers Probe Explosion of Pyrosomes off the Northwest Coast

Researchers from NOAA Fisheries’ Northwest Fisheries Science Center are collaborating with colleagues from Oregon State University and the University of Oregon to unravel the mystery of why the strange jelly-like organisms have exploded in number off the Northwest Coast in recent months. 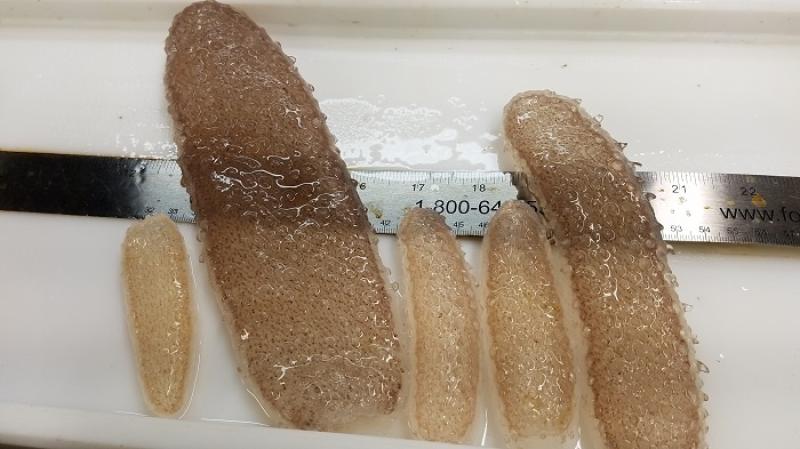 Call it the invasion of the pyrosomes.

Researchers from NOAA Fisheries’ Northwest Fisheries Science Center are collaborating with colleagues from Oregon State University and the University of Oregon to unravel the mystery of why the strange jelly-like organisms have exploded in number off the Northwest Coast in recent months.

Generally found in more tropical waters around the globe, the tubular pyrosomes were rarely if ever seen off the Northwest until about two years ago. They have since multiplied and this spring appear to be everywhere off the Oregon Coast to the point they are clogging fishing gear by the thousands.

A five-minute midwater tow of a research net off the Columbia River in late May brought up approximately 60,000 pyrosomes. Scientists spent hours sorting through the massive catch to find the rare fish they were targeting.

“We have a lot of questions and not many answers,” said Ric Brodeur of the Northwest Fisheries Science Center’s research station in Newport, Oregon. Brodeur has worked off the Oregon Coast since the 1980s and had never seen a pyrosome before 2014. “We’re trying to collect as much information as we can to try to understand what is happening, and why.”

Underwater video captured by the NOAA research ship Bell M. Shimada in May show legions of pyrosomes in extremely high densities from approximately 40 to 200 miles off of the Oregon Coast. They ranged in size from 4-6 cm (about an inch) to a whopping 78 centimeters, or more than two feet long. Researchers found larger and more abundant pyrosomes farther offshore.

Pyrosomes are as mysterious as they are strange. Each pyrosome is made up of individual zooids – small, multicellular organisms – linked together in a tunic to form a tube-like colony that is closed on one end. They are filter feeders and use cilia to draw plankton into their mucous filter.

Some bony fish, dolphins and whales are known to eat pyrosomes, but scientists know little about their role in the offshore ecosystem or how they may affect the food web in areas where they are now appearing in such high densities.

“At first we didn’t know what to make of these odd creatures coming up in our nets but as we headed north and further off shore, we started to get more and more,” said Hilarie Sorensen, a University of Oregon graduate student who was aboard the Shimada on its May research trip off Oregon. “We began counting and measuring them to try to get a better understanding of their size and distribution related to the local environmental conditions.”

Pyrosome numbers in the Northern California Current – which encompasses Northern California, Oregon and Washington – increased in 2015 and again in 2016. As far as scientists know, however, their abundance this year is unprecedented. Salmon and shrimp fisheries reported large catches of pyrosomes off Oregon early in the season and the odd organisms are turning up in large numbers as far north as Southeast Alaska.

The feeding behavior of pyrosomes, the environmental variables that may affect their numbers and their impacts on the food web are largely unknown. Researchers are interested in unraveling those mysteries by exploring pyrosome population dynamics and determining what could be driving such high abundances in the Northern California Current.

Last updated by Northwest Fisheries Science Center on May 10, 2022