Researchers to Study Survival of Kona Crabs After Catch and Release

The new NOAA Fisheries-funded study will help managers better understand if crabs that are released back to the wild survive any fisheries-related injuries. 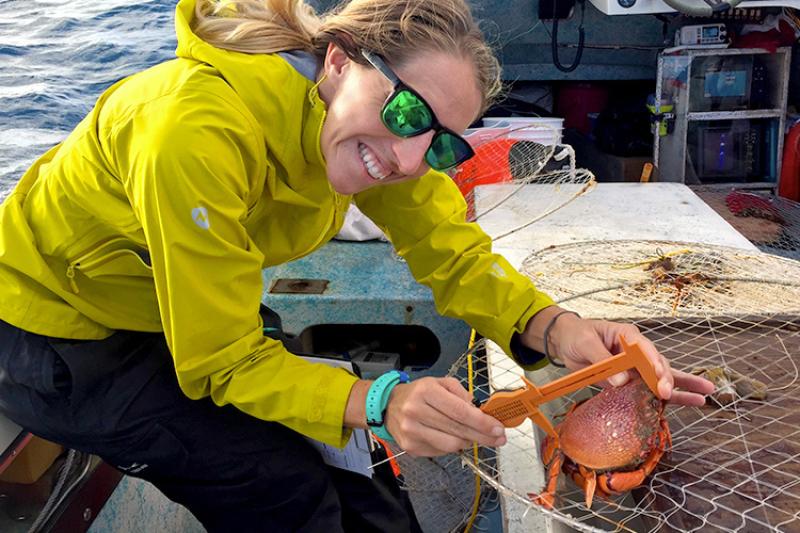 Given as gifts and served at social gatherings, graduations, weddings, and holidays, the Kona crab (also called spanner crab) is a rare delicacy in Hawaiʻi. It’s also tightly regulated. Fishermen who catch a female Kona crab or a small male crab—less than 4 inches in carapace length—must release the crustacean back to the wild. Research suggests fishermen have to release 80 percent of Kona crabs they catch.

But what happens to liberated crabs that sustained injuries during the catch-and-release process? Honolulu-based Poseidon Fisheries Research is now conducting a study to get to the bottom of this important question. Their research is funded through a Saltonstall-Kennedy Grant awarded by the NOAA Fisheries Pacific Islands Regional Office.

For the study, researchers will tag and release injured and uninjured Kona crabs. They will then compare how many of these two groups they catch again to gauge how well the crabs survive fisheries interactions. The study builds on Poseidon's previous work, which looked at how well Kona crabs survived from injuries in a laboratory setting. That research found that nearly nine out of ten injured crabs survive after losing one or more dactyli—the last segment of their limbs.

"We’re hoping to show that our lab results are representative of what’s happening in the field," says John Wiley, a fisheries biologist and managing partner at Poseidon. "And that the crabs are able to survive the minor injuries that they get during the fishing process."

In February 2019, NOAA Fisheries released its stock assessment of the Kona crab. It found that the small fishery is currently sustainable, partly based on Poseidon's lab study. If the new research corroborates those findings, it would further suggest the Kona crab fishery could handle increased fishing activity due to less restrictive regulations. Such a change could make the crabs more widely available to consumers.

Found throughout the main Hawaiian Islands, Kona crabs spend their lives buried beneath the sand in waters 2–200 meters deep. Spearfishing is banned within the Kona crab fishery, which is closed annually between May and August when the crabs breed.

To catch the elusive creatures, fishermen instead rely on baited hoop nets. Lured by the bait, hungry crabs emerge from their sandy cover and the net entangles their spiny appendages. Fisherman can then pull up the trapped crustaceans to eat—that is, if other predators don't get to the crabs first.

Wiley and his colleagues had previously used cameras to see what happens to crabs on the traps. In some cases, spotted burrfish (a type of pufferfish) would bite off a crab's claws. Other times, spotted eagle rays would take a chunk out of a crab's carapace or eat the crab whole. They leave just its limbs attached to the net.

In addition to these injuries, crabs often lose part (typically the dactyl) or all of their legs when fishermen try to disentangle them from the nets.

But it's unclear just how devastating these injuries are to crabs that are released.

In laboratory research conducted on spanner crabs in Australia, scientists found that 60 to 100 percent of crabs with disentanglement injuries died within 50 days. These deaths were due to an inability to regenerate limbs. This finding is in stark contrast to the high survival rate seen in Poseidon's previous study.

"If they're only missing dactyl from their limbs, they do a good job of surviving," Wiley says. "They’re able to regrow legs like other crabs do, and we’ve seen a lot of this regrowth." But, he notes, the mortality rate is higher for crabs that lose a whole limb, especially if any inner tissue is also lost.

The discrepancy between the studies’ results could be due to differences in the lab settings, Wiley explains. The Australian study used smaller tanks which could have crowded the crabs and increased their stress. The new research may help unravel this mystery and will also account for predation and competition pressures not present in a lab setting.

The NOAA-supported research has one more goal.

"We’re hoping to get a more accurate estimate of local abundance to extrapolate to the whole population," Wiley says, adding that this goal requires help from Kona crab fishermen.

Wiley and his colleagues are attaching thin, yellow tags around crabs' pincers. Each tag has a number associated with the crab, allowing the researchers to identify the crab and know where they caught it.

"If fishermen catch one of these tagged crabs, they can call us," Wiley says. "And hopefully they can provide a location and let us know if it has any injuries. And they can tell us how many crabs in total they caught and released."

Poseidon Fisheries Research's study is the only project the Pacific Islands Regional Office funded through the Saltonstall-Kennedy Grant Program for fiscal year 2019. However, we funded 56 other projects—a number of which are also directly related to seafood—under other grant programs.

For the full list of grant awardees and projects, check out our StoryMap of the Pacific Islands Regional Office Federal Programs Office 2019 Annual Report.

And to download a PDF version of the report, as well as reports from previous years, please visit our Pacific Islands Regional Office Federal Programs Office Annual Reports page.