Returning a Cranberry Bog to a Thriving Wetland

A restoration project 15 years in the making. 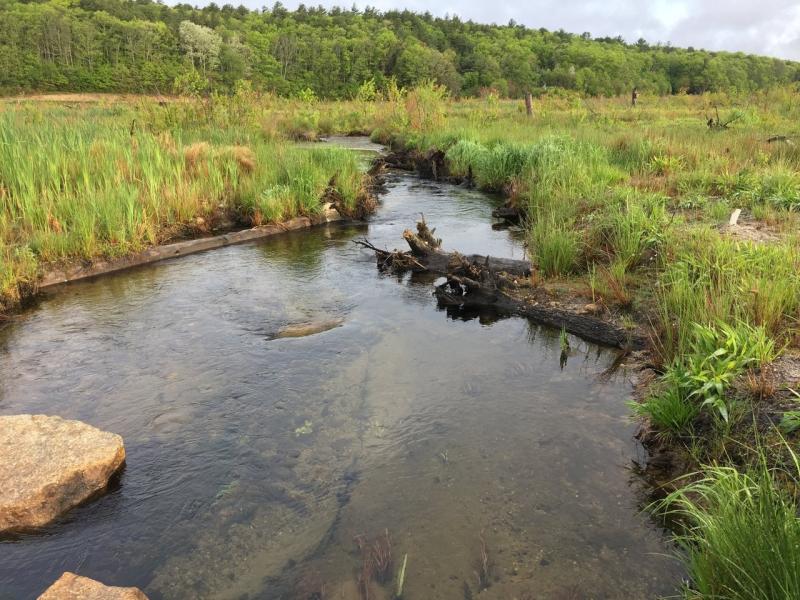 It’s not often that the differing interests of so many groups align as perfectly as they did with the Tidmarsh restoration project in Plymouth, Massachusetts. Eric Hutchins, a marine habitat resource specialist with NOAA’s Restoration Center, says this project is “second to none.”

Cranberries were once a premier Massachusetts crop, and Tidmarsh Farms near Plymouth contributed 1 percent of Ocean Spray’s harvest. The industry in Massachusetts declined in the early 2000s, and owners Glorianna Davenport and Evan Schulman were thinking about how to move on. But they weren’t eager to see Tidmarsh become just another development.

A Woman with a Vision

Davenport, an MIT professor and filmmaker, heard about the nearby Eel River project that turned a retired cranberry bog back into a marsh.

Her vision: keeping the 600-acre property as a sanctuary—never to be developed—that would be open to the public. It would also serve as a living research laboratory for undergraduate and graduate students to monitor the long-term effects of the restoration. Less than a mile from the coastline, it provided a unique opportunity for a large-scale restoration project.

Gloriannna reached out to the Natural Resource Conservation Service, one of the partners on the Eel River project. Over time, other partners joined the effort, including NOAA, the state and the town of Plymouth. Each partner brought different strengths to the project. We all agreed that a comprehensive, holistic, science-based process was the best approach.

The Making of a Cranberry Bog

The land had been in use as a cranberry bog since the 1890s. Like other cranberry farms in southeast Massachusetts, Tidmarsh was created by replacing native habitat—in this case, forested wetlands. The trees were cut, the swamp drained, and the streams channelized.

As part of the cranberry cultivation, sand was periodically layered on top of the existing peat, compressing it and changing the landscape. Barriers were erected to trap water and control flow, which also prevented fish from swimming through to reach their upstream habitat.

Glorianna and the team faced a challenge: how could we bring the marsh back? We could never completely return the land to its natural state, but we could restore it to functioning habitat.

Tidmarsh is comprised of two parcels, Tidmarsh East and West. In 2011, Tidmarsh East became a high-priority project for Massachusetts Department of Fish and Game’s Division of Ecological Restoration (DER). Alex Hackman with DER led the effort to restore the cranberry bogs—the state’s largest freshwater wetland restoration ever—with design and technical assistance from NOAA and others.

Mass Audubon is in the process of purchasing Tidmarsh East and establishing a wildlife sanctuary. They will create trails and signage, and maintain staff to support the sanctuary and engage the public, including schools in greater Plymouth.

By the time the Tidmarsh East was taken out of production in 2010, two feet of sand had been layered on top of the peat. We couldn’t remove it all, so we used it to shape mounds and gullies that defined the wetland surface. Excavators dug three miles of new stream channel. Rather than flowing through straight, man-made channels, water now flows more slowly, at a cooler temperature that’s ideal for fish.

We brought in thousands of trees to create more diverse habitat. We also removed dams and barriers across the property—which connected the headwaters to the sea for the first time in more than 100 years. The restoration connected the property to nearby protected areas, ensuring a habitat “corridor” for fish and wildlife.

The Town of Plymouth purchased the smaller parcel, Tidmarsh West, in June 2017. The Town and partners expect to implement restoration in 2018. Once complete, the land will be maintained as permanently protected open space for public recreation.

These types of projects are “far and away the most rewarding work we get to do,” says David Gould, Director of Plymouth’s Marine and Environmental Affairs.

So far, this project has restored 225 acres of wetland habitat and more than three miles of stream channel. Before restoration, we rarely saw fish like alewife and blueback herring in the bog. In 2016, we saw thousands swimming beyond the former barriers.

“It’s amazing how quickly nature comes back,” Davenport notes. “The amount of new growth is striking.”

The success at Tidmarsh is a hopeful sign for the rejuvenation of wetlands around the region. The success of Tidmarsh means that DER has a model for other cranberry farm conversions. Many of the 14,000 acres of cranberry farms remaining in southeast Massachusetts will be retiring soon. Hackman says he is “eagerly wading” into this new focus for restoration, and hopes to help other farmers in the region wishing to pursue a similar path.

Tidmarsh East and West will continue to serve as Davenport’s “Living Observatory.” Students and faculty will observe, document, and interpret the wetlands’ response to restoration over the next several decades.

Tidmarsh East will soon become one of Mass Audubon’s “most exciting wildlife sanctuaries,” according to Bob Wilber, director of land conservation of Mass Audubon. It will help them organization reach their goal of having a sanctuary within a 20-minute drive of everyone in the state.

Not only that, but changing the land from channelized, restricted farmland to open marsh will help the nearby community in the long-term. Coastal areas like Plymouth are at risk from changing weather and sea level rise. The new marsh can absorb flooding and storm surges, protecting nearby homes.

“There are actions we can take to make our future in a climate-changing world a little better,” says Wilber. The restoration at Tidmarsh Farms is one of them.

Last updated by Office of Habitat Conservation on April 27, 2020