RK30: The Story of Scars

Hawaiian monk seal of the month for December 2017. 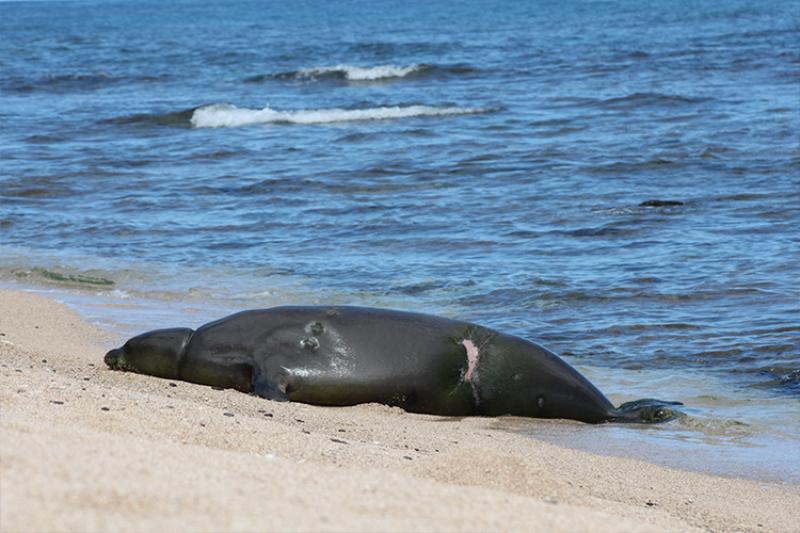 RK30, the bearer of many scars. Note the indented ring around her neck caused by marine debris cutting into her flesh. The massive scar on her left flank was likely from a large shark bite. The multiple small circular scars were caused by cookie-cutter sharks, which are not life-threatening but certainly a nuisance!

Notable Facts: Has many noticeable scars across her body, including a permanent indentation around her neck caused by entanglement in marine debris.

To the casual beachgoer in Hawaiʻi, one Hawaiian monk seal can look just like the next. What appears to be a male monk seal could be a female, and a “mother and baby” pair may actually be a juvenile and newly weaned pup tumbling in the shore break. Such mistakes are common in the calls to our hotline.

But when someone calls our hotline to report a seal on Kaua‘i that “has something around its neck,” it almost always turns out to be the female seal RK30. The “poster seal” of monk seal threats, RK30 is one seal that certainly represents the many challenges monk seals face.

In 2005, experts with the NOAA Pacific Islands Fisheries Science Center suspected that a report of RK30 with a “thing around her neck” was evidence of entanglement with a piece of line. A team boated to a remote beach along Nāpali Coast to hopefully remove the line from her neck—but RK30 wanted nothing to do with their help. She was a strong, powerful adult, and she managed to evade our team.

But all was not as it seemed. Our vet at the time, Dr. Bob Braun, was able to get a good look at RK30 during the encounter and positively confirmed that she had been entangled. However, Dr. Braun realized that RK30 didn't have a piece of line around her after all, just a permanent indentation created from a lengthy past entanglement. At some point in her life, RK30 had freed herself of an entanglement, but it took a while for her to shake loose of the line as evidenced by the remaining, dramatic scar around her neck. RK30 had, luckily, slipped her noose before the entanglement could kill her.

We'd later realize that this episode was the first sign that RK30 is the extreme survivor she’s turned out to be. That is, the entanglement scar isn’t her only indication of a brush with death. She also has boat propeller scars on her belly and a large scar on her left side, probably from an encounter with a large shark.
RK30, the bearer of many scars. Note the indented ring around her neck caused by marine debris cutting into her flesh. The massive scar on her left flank was likely from a large shark bite. The multiple small circular scars were caused by cookie-cutter sharks, which are not life-threatening but certainly a nuisance!

RK30’s skill at evading death has significantly benefited her species—the monk seal has, to our knowledge, birthed at least nine pups. Unfortunately, not all of RK30's offspring have survived. One pup, when it was very young, got washed out to sea by heavy surf. Another died after ingesting a fishing hook. Her oldest known living offspring is RW06, a female that's regularly seen along Kaua‘i’s South Shore and nearing reproductive age.

RK30 was pregnant with another pup (RH38) in 2016 when she was harassed by a man while she was resting at the ocean’s edge. The man was eventually sentenced to 4 years in prison by Hawai‘i’s Environmental Court. This conviction was the first under the state’s felony endangered species harassment statue, a legislation that was initiated by a few stalwart monk seal supporters and introduced by then-Senator Gary Hooser in 2010 after a spate of intentional killings of monk seals. A few days after RK30’s encounter with the intoxicated man, she gave birth to a healthy RH38 at one of her regular pupping sites along Nāpali Coast. And she gave birth to another pup this year. 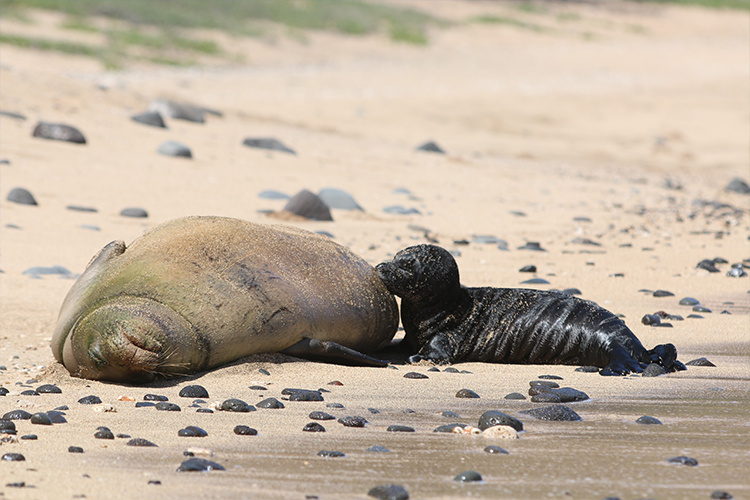 RK30 nursing her young pup in 2017 on the rugged Nāpali Coast of Kauai.

During the 13 years we’ve tracked RK30 around Kaua‘i, she’s exhibited some unique behaviors. She's come to shore at virtually every beach around Kauaʻi and sometimes "logs" just offshore in shallow, calm waters. As tolerant as she generally appears to be around humans, she's no pushover — she’ll bark and lunge at people who agitate her. She's known to push through throngs of people in the water and onshore to find a place to rest at busy sites along the South Shore and East Side.

We’ve also received frequent reports of RK30 associating with Hawaiian green sea turtles (honu), though not always in nice ways. She has, on occasion, pushed them around, flipped them in the air, and gnawed at them. Thankfully, there have yet to be any reports of her seriously harming honu!

Last updated by Pacific Islands Regional Office on May 05, 2020