Rock Sole in Alaska May Do Well in Warmer Ocean

New findings on how fish populations respond to climate change could help fisheries managers and industry plan for the future. 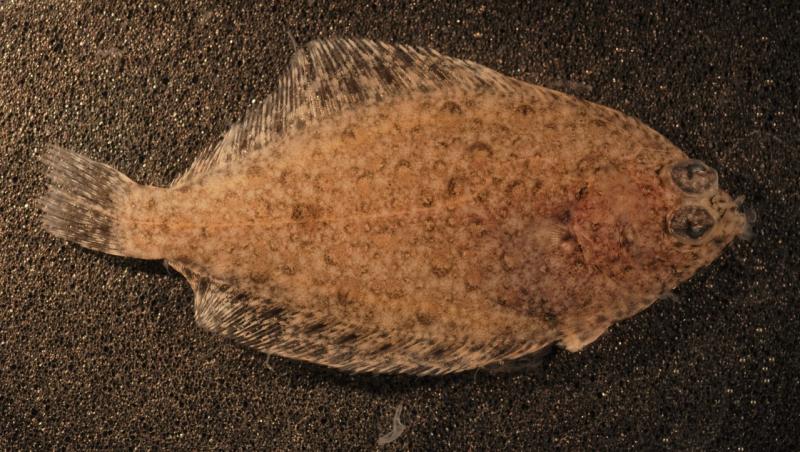 Scientists found the first quantitative evidence that the absence of the “cold pool” from northern rock sole nursery grounds during the first year of life was associated with strong recruitment. Recruitment means the number of fish spawned in a given year that survive to maturity or a size available to the fishery. This is usually a few years after they are spawned.

The cold pool is a body of cold (<2 °C) bottom water formed under seasonal sea ice in the Bering Sea. Its presence in the nursery area is variable because the extent of sea ice changes from year to year.

These findings have long-term significance because the cold pool is projected to move north and shrink as sea ice dwindles under climate change. In 2018, for the first time on record, the cold pool was completely absent from the Bering Sea during the summer months.

“Understanding how environmental changes affect fish populations could lead to earlier and more accurate predictions of fishery recruitment in the short term,” says Dan Cooper, the NOAA Fisheries biologist who led the study. “And being able to predict how fish populations may respond to long-term climate change would give fisheries managers and industry advance warning to plan and adapt.”

Variability in recruitment is the primary driver of large fluctuations in fish populations. This has led to a long history of attempts  to understand the environmental causes of recruitment variability—with limited success.

One reason models that are used to predict recruitment fail may be that they include too many environmental factors. They should instead focus on the ones that are most important to the particular species and stage of life considered.

“If we understand the mechanisms—how environmental changes affect young fish—we should be able to narrow down which relationships are important to create more accurate predictive models,” Cooper says.

Toward that end, Cooper, and colleagues Lauren Rogers and Tom Wilderbuer, developed and tested a suite of models to predict recruitment. They were based on species-specific biological knowledge and historical data for an ecologically important and potentially valuable species: northern rock sole. Northern rock sole are a large and underexploited fisheries resource. They have a long-term average biomass of more than 2 million tons—but highly variable recruitment from year to year.

Young rock sole face many challenges on the way to recruitment. Spawned far offshore, larval fish are too small to swim long distances. They depend on favorable currents to transport them to shallow nursery grounds. Those that successfully reach nursery areas need the right conditions to settle into the bottom-dwelling life of a flatfish. That’s where they grow before moving on to deeper waters. 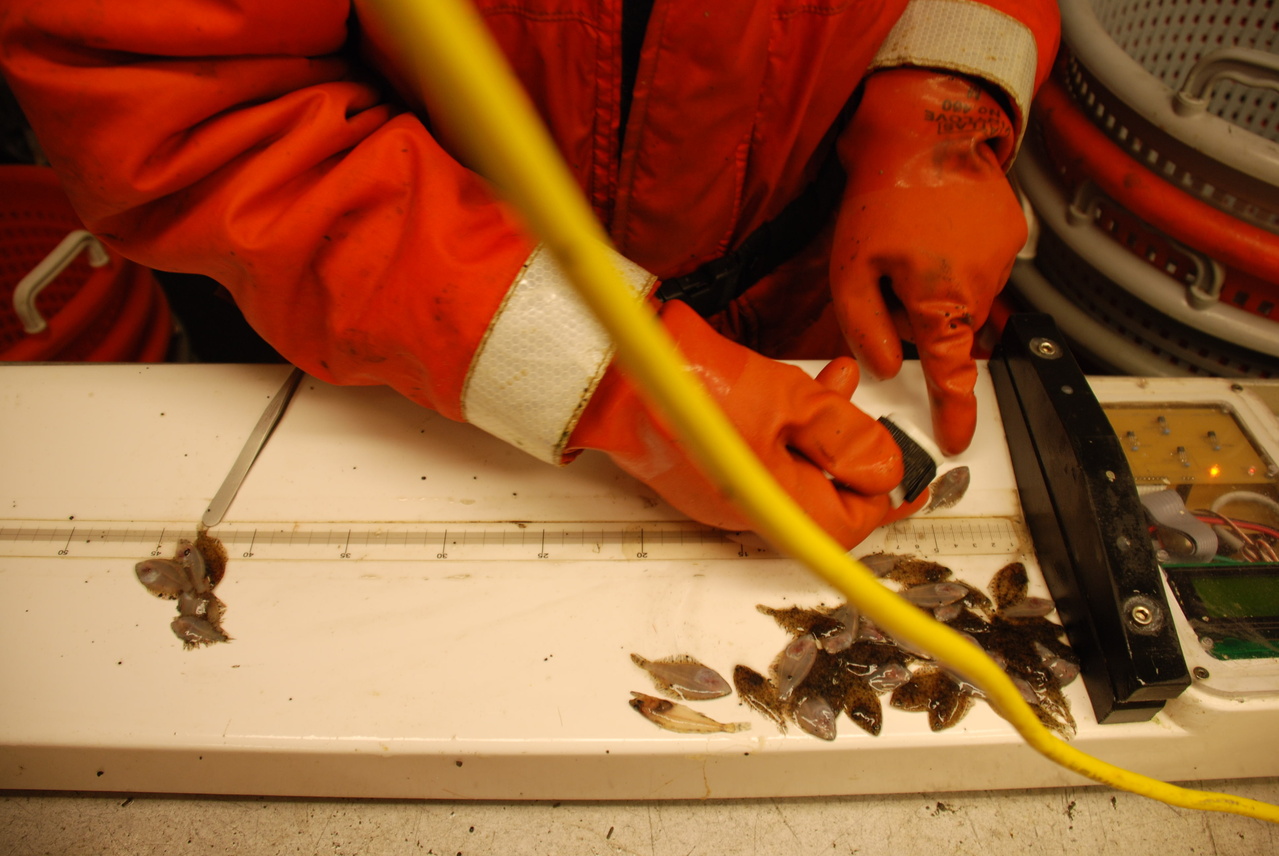 One of these nursery areas is located along the mainland western Alaska coast. It’s large enough to produce strong year classes for the entire eastern Bering Sea all by itself. 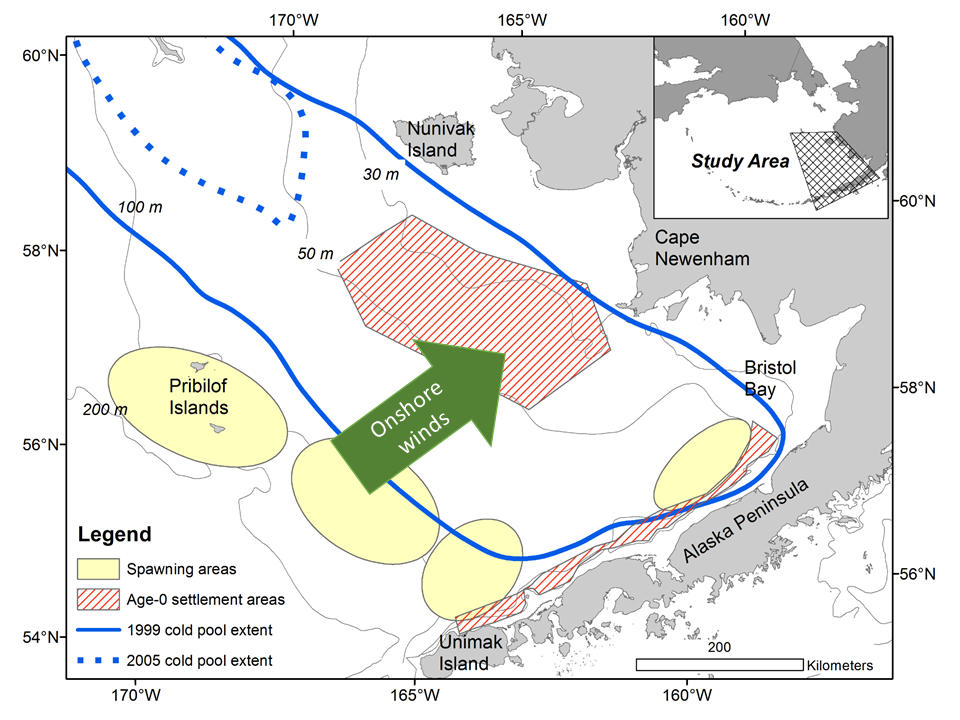 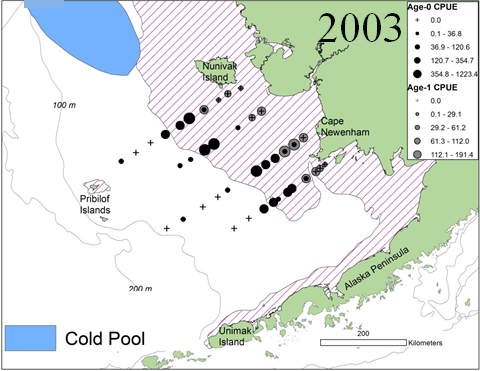 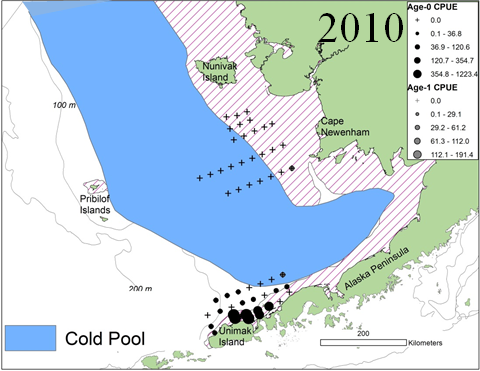 The number of young northern rock sole produced is much lower in a year when the cold pool extends over the nursery area, leading to lower recruitment 3 years later.

Previous studies by Tom Wilderbuer and others had shown that northern rock sole recruitment is enhanced by onshore winds. These winds help transport newly hatched fish to this northern nursery area. Cooper’s team suspected that the cold pool also played a role. Cooper and others had earlier reported that in a warm year (2003) the cold pool was absent from the nursery and there were billions of juvenile rock sole. In two cold years (2008 and 2010) the cold pool covered much of the nursery area, which produced virtually zero young rock sole.

“Besides this evidence, we had a possible mechanism,” Cooper says. “Exposure to the cold pool may reduce rock sole recruitment by slowing the growth of larvae and juveniles.”

A previous study showed that larval growth at 2 °C is slowed to the point that they would not reach settlement size during their first summer. Juvenile growth is also reduced at 2 °C. Settling in the cold pool could increase juvenile mortality by producing smaller fish that are vulnerable to predation over a longer time.

Based on this knowledge, Cooper’s team narrowed the environmental factors to include in their models to two. They created a suite of models and compared the results with time series of data to test these hypotheses: 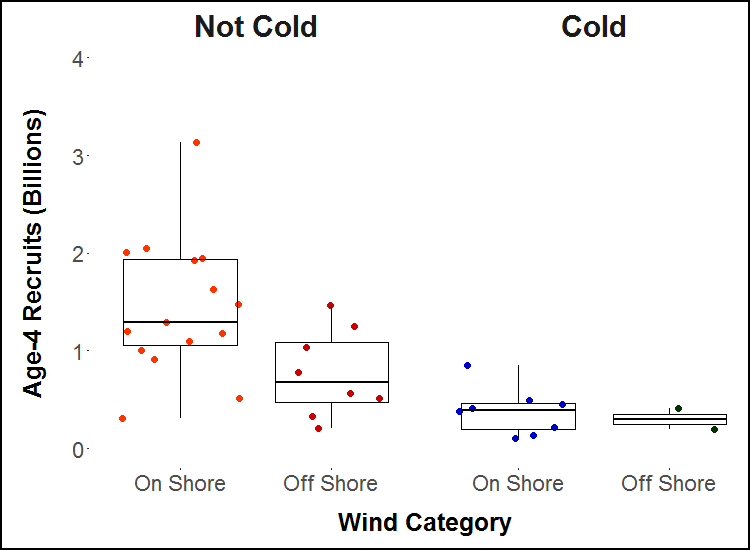 Northern rock sole recruitment is highest and most variable when the cold pool is absent and onshore winds are present during spring of their first year.

“Including both wind and cold pool indices resulted in the best model for predicting recruitment that we have. It is still far from perfect, and with just two environmental factors it is very simple, but in this case simple seems to be best,” says Cooper.

In future work, Cooper hopes to see more studies of mechanisms for environmental influence on recruitment. “The more our models are based on real mechanisms, the better the odds that they will predict future recruitment.”

Population models with environmental variables are currently not used in northern rock sole assessments. Cooper hopes this work may provide a basis for projecting stock levels based on climate models.