The Rose Atoll Marine National Monument (RAMNM) is a protected area covering some 13,450 square miles of land, water, and reef in and around the Rose Atoll in American Samoa. Now, thanks to NOAA and its partnering agencies, you can take a virtual tour of portions of the monument's pristine fringing reefs using Google Street View. 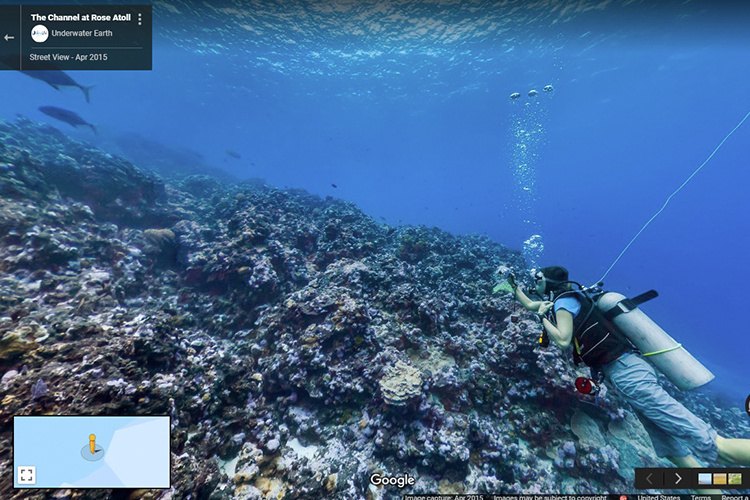 The underwater mapping was part of the Catlin Seaview Survey, which has been working with Google since 2012 to "scientifically record the world's coral reefs and reveal them to all in high-resolution, 360-degree panoramic vision," according to the survey project's website.

The survey's crew uses specialized equipment to take thousands of panoramas of the world's coral reefs that are then stitched together using Google's famous Street View mapping technology. This results in three-dimensional slices of individual reefs, which viewers can virtually dive around in at their leisure.

In November of 2013, NMSAS superintendent Gene Brighouse and Kalewa Correa of the Papahānaumokuākea Marine National Monument discussed the potential for American Samoa to be mapped using Google Street View. Though the original goal was to map the land area of American Samoa (particularly its sanctuary sites, including RAMNM), Correa eventually brought the Catlin Seaview Survey into the fold to also map American Samoa's underwater treasures.

The Seaview team was initially drawn to the idea of mapping Fale Bommie, known colloquially as "Big Momma" – a Porites coral that may be the largest coral head in the world - but later realized the benefits of also capturing the wondrous coral reefs of RAMNM.

In December of 2014, NOAA, the U.S. Fish and Wildlife Service, Google Street View, and Catlin Seaview Survey brought the project to fruition.

Similarly, the Catlin Seaview Survey team used their underwater camera sled to capture images of the coral reefs across American Samoa, including Big Momma and the channel leading into the Rose Atoll lagoon. They conducted two full dives to collect panoramic images for the Google Street View of RAMNM.

"The National Marine Sanctuary of American Samoa hopes this project will produce an accurate record to monitor coral reef change over time, provide virtual dive and site experiences for people to Fagatele, Fagalua/Fogama'a, Aunu'u, Ta'u, and Muliava (Rose Atoll), and show to the world how special and important these remote islands and surrounding coral area," Brighouse says.