Natural resilience is more important than ever in the face of unprecedented climate change. 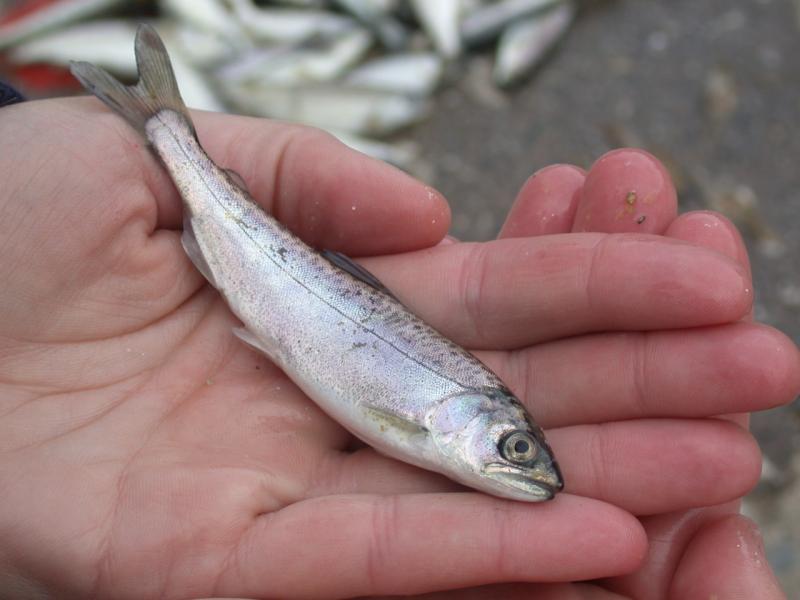 The manipulation of rivers in California is jeopardizing the resilience of native Chinook salmon. It compresses their migration timing to the point that they crowd their habitats. They may miss the best window for entering the ocean and growing into adults, new research shows.

The good news is that even small steps to improve their access to habitat and restore natural flows could boost their survival.

The curtailment of high winter river flows by dams means that they no longer provide the cue for the smallest fish to begin their migration to the ocean. The loss of wetlands in the Sacramento-San Joaquin Delta leaves little of the refuge habitat they need to grow along the way. Meanwhile later-migrating fish suffer from rising summer temperatures that reduce their survival even though they migrate at a larger size. 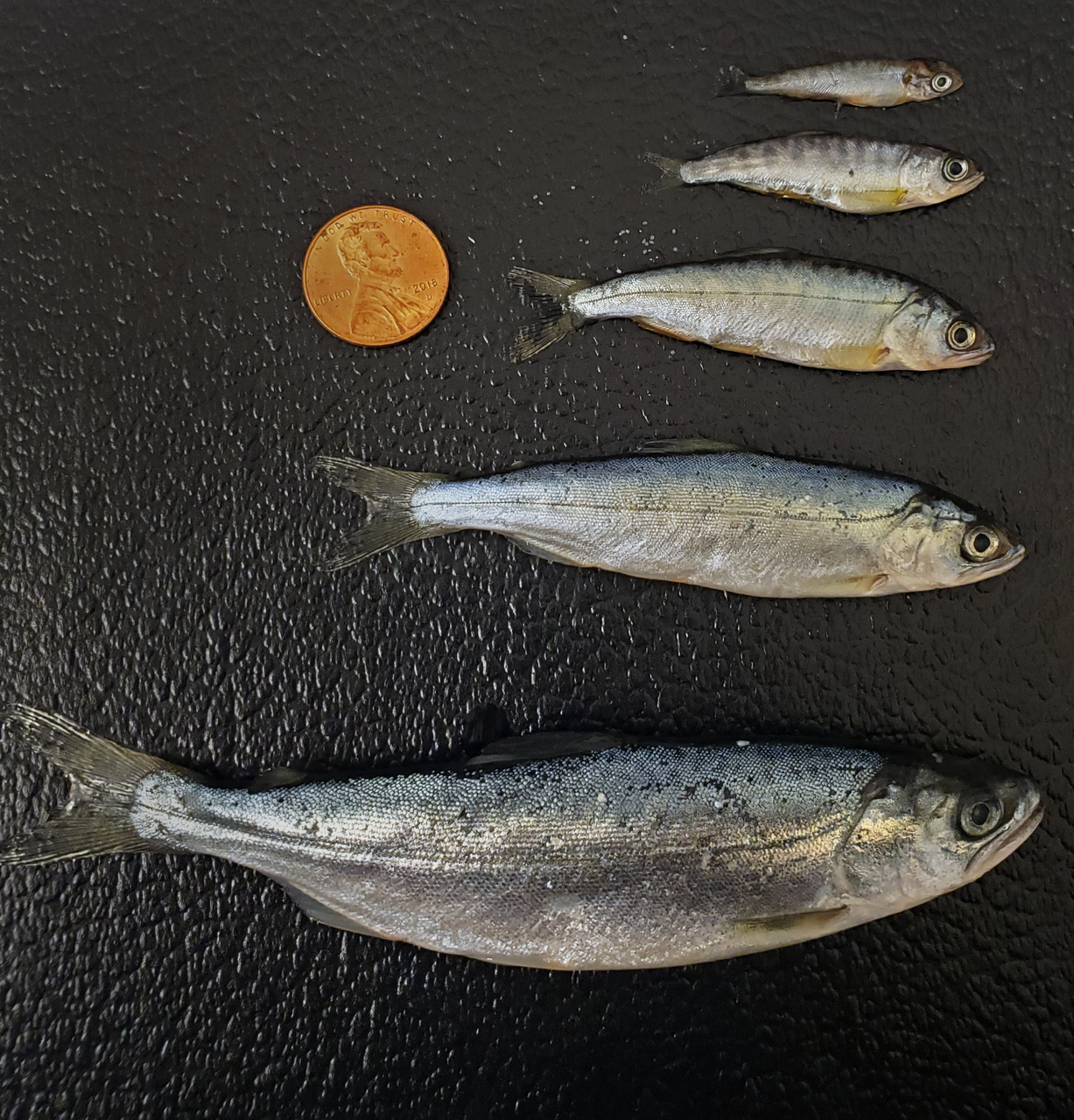 Fish that begin their migration in mid-spring are the ones that survive best and dominate adult salmon returns to rivers such as the Stanislaus. These results were cited in a study published this week in Global Change Biology. Flow alteration and habitat loss have in effect homogenized the survival opportunities of salmon in this highly managed river system, researchers wrote.

That diminishes what is called the “portfolio effect,” where a diversity of salmon migration strategies help the fish cope with changing environmental conditions. This is similar to how diversified investments help buffer your financial portfolio against jolts in the stock market. Chinook salmon in California evolved diverse migration timing to handle the wide variation in climate, ocean, and river conditions in the Central Valley region. This is also important as climate change and rapidly changing, “whiplash weather” patterns further alter the picture.

“You never know what’s going to be a winning strategy in the future,” said Anna Sturrock of the University of California, Davis, and lead author of the research that also included scientists from several other agencies and universities. “Keeping options on the table is the best strategy, but that is not what we see happening.”

The research also found that the lower flows released from dams tend to reduce fish production. This is likely due to reduced access to floodplain habitats and lower food production in rivers. 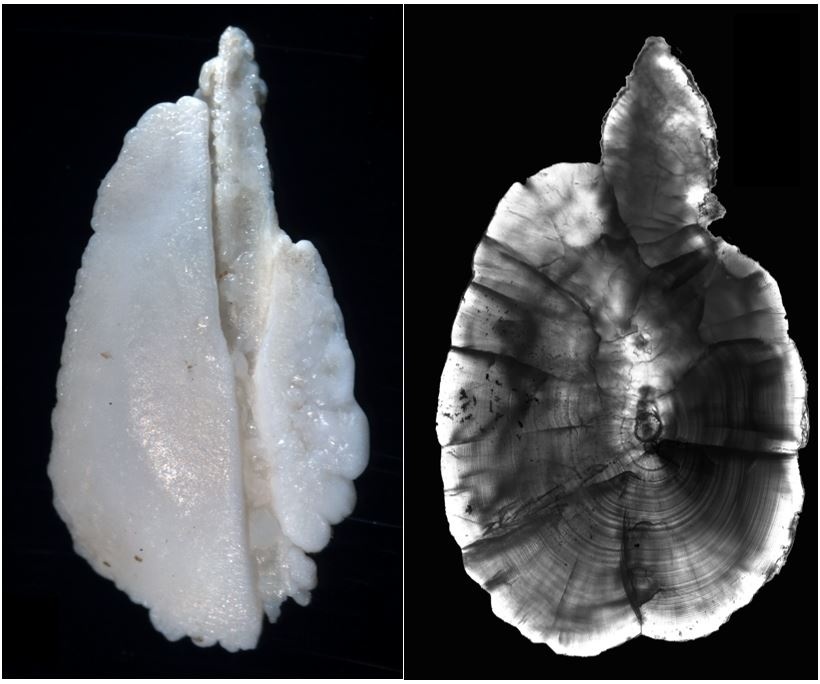 Scientists examined otoliths, the ear bones of salmon, for chemical signatures that reflect each fish's migration to the sea. A whole and cross-sectioned otolith is shown. Photo: George Whitman, University of California, Davis.

Biologists analyzed two decades of salmon migration data and tracked seven generations of Chinook salmon in the Stanislaus River using chemical signals in their ear bones, called otoliths. Otoliths grow in proportion with the salmon and reflect the chemistry of the surrounding water. Researchers can use them to trace the way fish travel to the sea and gauge their size when they move among habitats.

The use of otoliths made it possible to track very young juvenile salmon called fry that are too small to fit with the electronic tags typically used for such research. This alternative approach revealed that large numbers of migrating fry can survive to adulthood—if they can find freshwater rearing habitat where they can grow along the way.

“That tells us there is this other life history strategy that may be really important,” said Rachel Johnson, a research fisheries biologist at NOAA Fisheries’ Southwest Fisheries Science Center and senior author of the research. “Tracking the smaller fish through their otoliths provides important new insights into Chinook salmon dynamics that have otherwise been missing from the picture.”

The trouble is, less than 3 percent of wetland habitat remains in the Sacramento-San Joaquin Delta. This leaves the small, early migrating fry without the much needed feeding and rearing refuge they need to grow and thrive on their seaward journey. 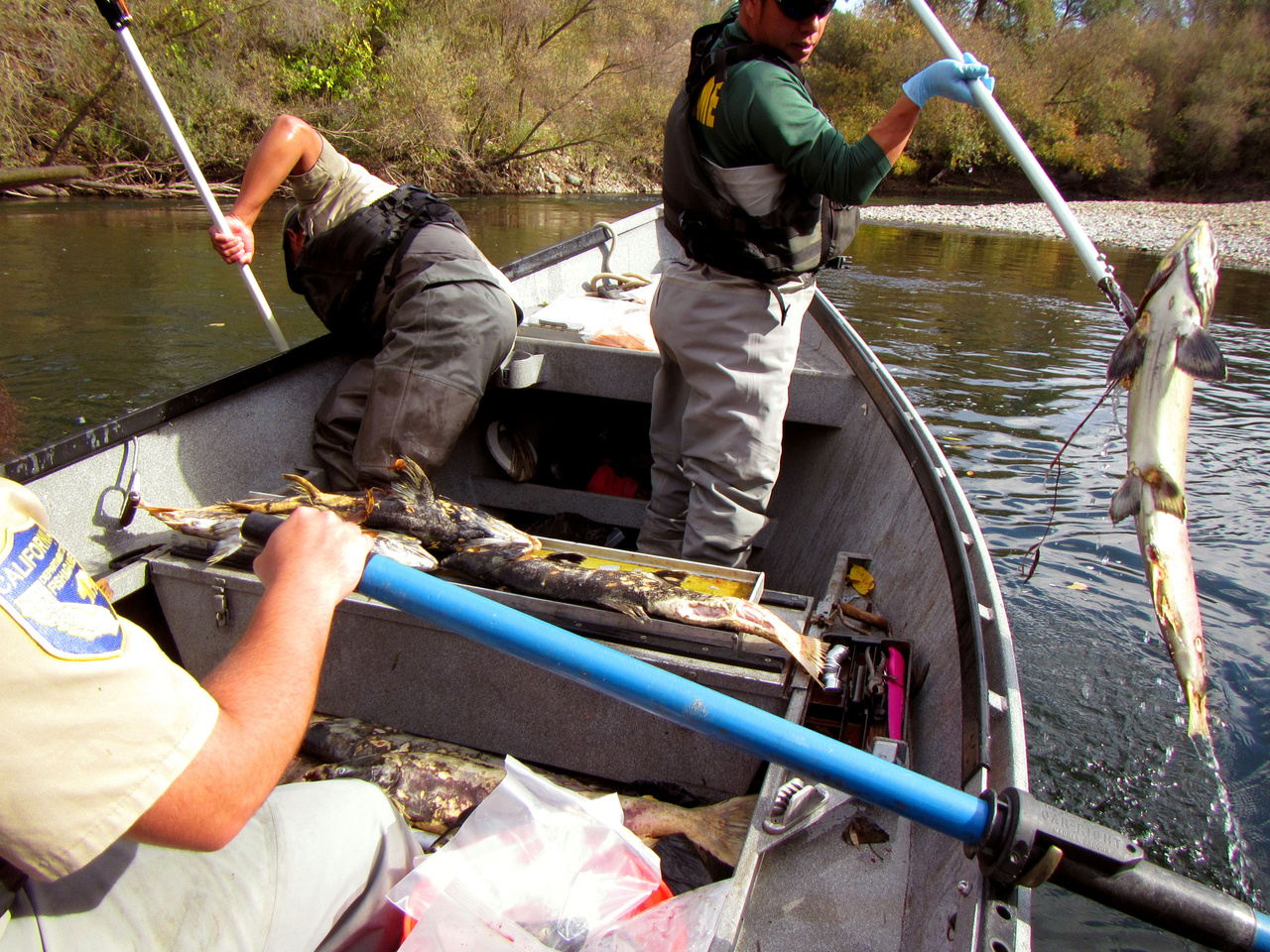 Biologists from the California Department of Fish and Wildlife collect salmon carcasses on the Stanislaus River so scientists can retrieve their ear bones for study. Photo: Anna Sturrock, University of California, Davis.

The authors say that even minor steps to restore some of the natural fluctuations in river flow could benefit salmon by helping maintain some of their valuable diversity. Fry migrate early in such great numbers that even small improvements in their survival rates through the Delta could yield many more fish to help boost adult returns.

“As the climate gets more unpredictable, we need to think about incorporating bet-hedging into river management rather than manipulating the environment in ways that limit options for fish,” Sturrock said. “The more options that are left on—or added to—the table the better chance that some fish will be in the right place at the right time.”