Saving Wild Salmon: All in a Day's Work

Marine Habitat Resource Specialist Ruth Goodfield credits her dad with putting the first fishing rod in her young hands. That inspired her lifelong interest in fish and career in Habitat Restoration. 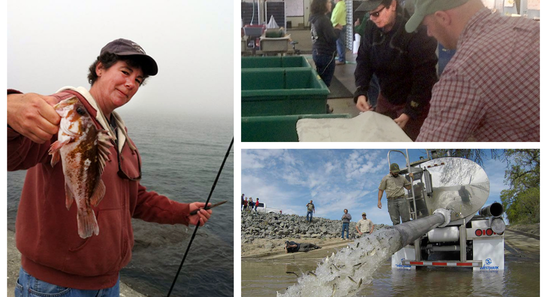 Ruth has been restoring salmon habitat in Northern California for more than 20 years. She joined NOAA’s Restoration Center in 2015 and  has been working ever since to increase Pacific salmon populations in the Sacramento river watershed.

The lives of these feisty fish--prized by sport fishermen, revered by tribal cultures--are framed by two dramatic journeys. Hatched in cool, gravelly mountain streams, the tiny salmon need a safe place to prepare for the long and perilous trip to the Pacific ocean. To succeed, they will need to outwit hazards and predators, gain size and strength, and adapt to saltwater.

Adult salmon spend two or more years at sea before returning to where they hatched, even from thousands of miles away. On their second difficult journey salmon won’t eat once they re-enter the river. They spend the last of their strength getting home to spawn, and then they die.

“Adult salmon live in the ocean, but they need cold, fast-moving fresh water to hatch the next generation,” Goodfield explains. “Their homeward journey is hundreds, even thousands of miles, and they only have one shot at reproducing.”

Development has dramatically altered the Pacific salmon habitat, resulting in drastic declines in population. Today ten native California salmon and steelhead species are threatened or endangered. Coho and Chinook salmon and the Steelhead trout stocks are at less than 1 percent of their historic numbers.

The hatchery put out an urgent call  and Ruth pitched in, helping hatchery biologists seek a fast solution. They hatched a plan: clear water from nearby fire hydrants could save the fish if it could be safely de-chlorinated. With many able hands, the team soon constructed five huge charcoal filters, and fresh, safe, water was restored within hours.

More volunteers arrived to relocate as many eggs and fish as possible. They worked late into the night loading fish trucks with more than six million endangered stock and eggs. Most were successfully moved to another hatchery facility.

Soon after, the Feather River hatchery was back in operation. On March 20, 2017 the hatchery, in cooperation with NOAA Fisheries, released one million four-inch, spring-run Chinook salmon--right on schedule.

Ruth Goodfield was on hand for the event. She noted: “These little fish have to run the gauntlet to make it to the Pacific. But if they do they’ll grow big out there.  A few years from now I hope I see them again, heading back home.”

For more detail on the fish hatchery story, go to: Collaboration in time of crisis: responding to the Oroville Dam emergency