Surveys of Farallon Islands seabirds revealed ocean shifts when little else could. 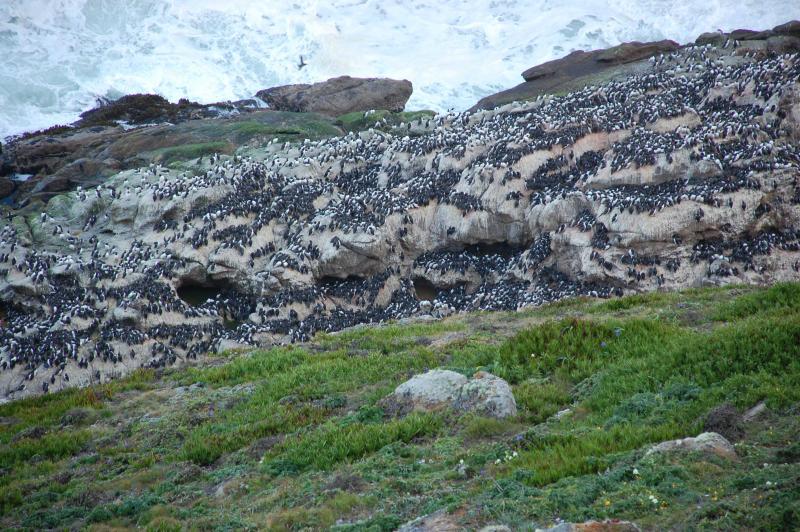 Common murres in the Farallon Islands off Northern California.

The COVID-19 pandemic curtailed daily life for millions and idled much of NOAA Fisheries’ marine research. Scientists turned to unusual collaborators: seabirds in the isolated Farallon Islands off the California Coast near San Francisco.

With most NOAA ships at the dock, the researchers realized that their nearly 40-year time series of conditions off the California Coast was in jeopardy. However, they also realized that long-term surveys of seabird diets could help validate what little other data they had. The birds sampled the same anchovy, rockfish, and other forage fish populations that research vessels do in normal times. Crews from longtime NOAA collaborator Point Blue Conservation Science have logged what fish the birds were catching as they returned to the islands to feed their chicks.

“The seabirds saved the day,” said Jarrod Santora, a research scientist at the Southwest Fisheries Science Center and lead author of the new research. Teams from Point Blue “had been watching these birds so consistently for so long, we not only had the data, but we had a pretty good idea what it could tell us about what was happening in the ocean.”

Their plan worked out. Crews who monitor the hundreds of thousands of seabirds nesting on the islands “were just as happy to avoid coming back to the mainland given everything was shutting down,” said Pete Warzybok, Senior Marine Ecologist at Point Blue Conservation Science. He leads the seabird surveys that began more than 50 years ago.

Scientists at NOAA Fisheries’ Southwest Fisheries Science Center realized as the pandemic set in during early 2020 that their offshore surveys faced long odds. They contracted a commercial fishing vessel and trained fishermen on how to use their specialized research net and sample the catch. The fishermen then delivered those samples to the survey team. They analyzed the catch in open lab spaces wearing masks and other protective gear as required for social distancing during the pandemic. That turned out to be one of very few fisheries surveys on the West Coast in 2020.

Between pandemic limits and harsh weather, however, the vessel collected only about 25 percent of the data that researchers would typically get from such surveys. They also needed other data to help fill out and confirm the rest of the picture.

Learning From Past Surveys

The researchers compared previous seabird prey data against ocean conditions at the time. They connected patterns in how much and what fish the birds were eating to shifts in the ocean ecosystem. As the pandemic set in during 2020, for example, the Pacific Ocean off the coast of California was experiencing a remarkable boom in anchovy populations. Other shifts affected marine life such as salmon that would later return to West Coast rivers.

In typical years NOAA research ships pull trawl nets at regular intervals along established transects off the West Coast. They look especially at the abundance of juvenile rockfish of many species and various other forage species, such as anchovies. Researchers can compare that long track record to current conditions to reveal shifts in the ecosystem, informing ecologists and fisheries managers.

As the effects of the pandemic set in, scientists used the data from earlier years to build models. These models incorporated the seabird data to assess the abundance of young rockfish, northern anchovy, and krill, which all hold key roles in the marine food web. The models estimated that rockfish recruitment remained low in 2020, while anchovy were surging and krill continued fluctuations. The results matched the trends in catches of Farallon common murres, which feed their chicks rockfish and anchovy.

The challenge of keeping science going during the pandemic “demonstrates the value of collecting a portfolio of data, rather than relying on one measure to tell the whole story,” said Chris Harvey, research scientist at the Northwest Fisheries Science Center in Seattle. The two NOAA Fisheries laboratories survey West Coast ecosystems and fish populations to help determine fishing limits and seasons.

That work informs the California Current Integrated Ecosystem Assessment, which is based in part on trends in ecosystem indicators such as seabirds and krill.

Researchers noted that there are good records for other seabird colonies around the world. The tool they developed based on the Farallon birds could be applied elsewhere during interruptions in other streams of data. However, they stressed that the data are valuable because of the consistent measurements over time. The methods they developed should be considered a stopgap, not a replacement for that monitoring.

Broader observations may also be revealing. For instance, the scientists recognized that reproduction of Cassin’s auklet increased in 2020 following a sharp drop the year before. That matched other data showing increases in krill in the area. At the same time, observers reported the gathering of about 50 blue whales near the Farallon Islands feeding on high-density swarms of krill.

“What you see in one part of the ecosystem is likely to be reflected in other parts of the ecosystem—you just need to know where to look,” Santora said. “We found that with the seabirds, which have been tracked for decades because they are such an important barometer of the health of our coastal ocean ecosystem.” 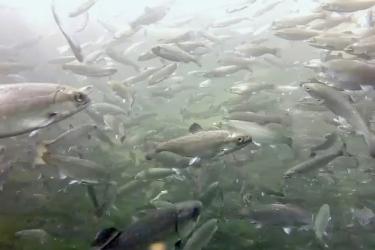