Dolphins are now frequent visitors to the Shrewsbury and Navesink Rivers in New Jersey, indicating a healthier environment. 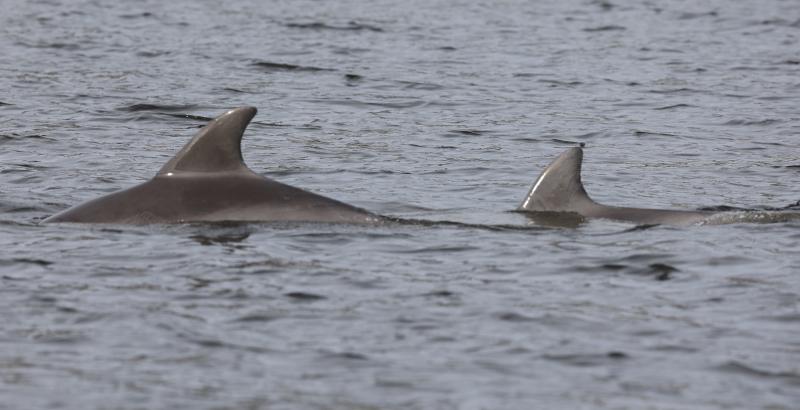 Dolphins are important sentinels of the health of the marine environment. Credit: Marine Mammal Stranding Center

In what has become an increasingly common occurrence, bottlenose dolphins have taken up seasonal residence in New Jersey’s Shrewsbury River. Dolphins were observed in the river throughout this past summer. Since November 2020, sightings of three dolphins, which are small and possibly juveniles, have been reported to our Marine Mammal Stranding Network partner for New Jersey, the Marine Mammal Stranding Center. As of January 14, these dolphins are reportedly swimming freely and in good body condition.

The sight of surfacing dolphins in the river delights area residents and biologists alike. Bottlenose dolphins historically visited Sandy Hook Bay, the Shrewsbury River, and the Navesink River. They may have become a less-frequent sight as water quality and fish populations fluctuated. Now, with cleaner waters, carefully managed fisheries, and increasing menhaden (small schooling fish also known as bunker), we are seeing more marine mammals in our coastal waters. In addition to the bottlenose dolphins that have been making semi-regular appearances, three beluga whales visited the river in 2015. Earlier this summer, a humpback whale was also spotted in the river. This corresponds to the dramatic increase in humpback whales we are seeing in coastal New York/New Jersey waters, as bunker continue to draw the animals close to shore.

We are thrilled to see our coastal dolphin and whale populations expanding their use of our nearshore waters. However, as the animals move closer to shore, they are more likely to be near people and boats. This can pose dangers to them, as some animals have been harassed or hit by boats.

Lessons from the Past

Dolphins started reappearing in the Shrewsbury River in the early 1990s. The dolphin visitors came, stayed for a while, and then returned to the ocean. However, over the years, there have also been dolphins that have come into the river and stayed, sometimes with fatal consequences. In 1993, four dolphins came into the river over the summer and didn’t leave. As the temperatures dropped and the river froze over, Coast Guard and Marine Police vessels patrolled the area and broke up the ice for the dolphins. Attempts to herd the animals out failed. The dolphins died, and their carcasses were found in April 1994.

NOAA Fisheries authorized a capture operation in November 2000 for two dolphins that had been observed in the river since at least September of that year. A large operation was organized to try and rescue the mother-calf pair, in an attempt to relocate them to the open ocean. The pair was captured by the rescue team but, unfortunately, the mother died from stress. The calf survived and was transferred to the National Aquarium in Baltimore for rehabilitation and died a few weeks later. A necropsy of the mother showed that she was in poor body condition, with a lung infection and healing rib fracture.

In 2008, a group of 16 dolphins entered the river in June, and several of them stayed in the area through the winter. While healthy, well-fed dolphins are capable of living in cold, winter waters, several of the dolphins died or disappeared after parts of the river froze. Since 2008, there have been several additional incidents of dolphins visiting the river over the winter, and some have stranded.

Letting Nature Take Its Course Is the Best Course of Action

One of the sad lessons learned from the 2000 event is that attempting to capture and relocate free-swimming animals may cause much more harm than good. It could inadvertently put the animals at high risk of injury or death. Rescue operations are also inherently dangerous for people on the rescue teams, especially during winter months when air and water temperatures are at their coldest.

Letting nature take its course is the best course of action with the least risk to the safety and welfare of the dolphins and our stranding network partners. The dolphins in the river are free to come and go at will. They have adaptations like thick blubber layers to insulate them from the cold and are most likely staying because the fish they feed upon is still in the area. Local experts continue to monitor the dolphins and are ready to respond if an animal strands ashore.

We don’t know why some members of the dolphin groups leave the Shrewsbury River while others stay. It may be that some find the area optimal for food and shelter and prefer the habitat. It may be that some are unable to find their way out to deeper water through the narrow spots, or may be intimidated by the noisy bridge traffic. It’s possible that the geography is confusing. Like the many sea turtles that get trapped in the arm of Cape Cod each winter, Sandy Hook may confuse animals looking for an exit as they try to go south, when the only way out is north. We do know that dolphins, beluga whales, and a humpback whale have successfully navigated their way into and out of the river on numerous occasions. The fact that dolphins keep returning to the area is a good sign that they find the habitat useful.

While the dolphins may have originally been following schools of bait fish, like bunker, there are still fish in the river during the winter. Surveys conducted by Northeast Fisheries Science Center Sandy Hook Laboratory suggest that the dolphins are likely to find winter flounder and river herring in the river at this time of year.

First, Do No Harm

It’s very frustrating for the local community, for our stranding network partners, and for us when the dolphins appear to linger into the winter. We fear the worst for them. And yet, these dolphins are swimming freely, in good body condition, and in their natural habitat. The best thing we can do for them is give them space to swim, feed, and move.

We know from past experience that trying to herd the dolphins out of the area or to capture them in nets is dangerous for them. It is not likely to be successful and can have tragic outcomes. Dolphins are quite capable of avoiding nets by swimming around or under them. Sometimes the dolphins end up further upriver as they try to avoid being captured. All of this causes stress or injury to the animals and can be debilitating.

When dolphins are swimming freely and in a habitat they regularly use, they are not considered either “stranded” or “out of habitat” according to the Marine Mammal Protection Act. As we keep careful track of these dolphins, we hope that they will find their way back to the ocean.

Dolphins in the River are Cause for Celebration

The repeated sightings of dolphins visiting the river over the past three decades is cause for celebration. The animals are important sentinels of the health of the marine environment. Their presence is a great sign that the water quality and fish stocks are able to support them.

If you see these dolphins, please report your sightings to Marine Mammal Stranding Center at (609) 266-0538.

Follow safe viewing guidelines by keeping a safe distance of at least 150 feet away from them.