A simple column of common soil can reverse the toxic effects of urban runoff that otherwise quickly kills young coho salmon and their insect prey, according to  new research by NOAA Fisheries, Washington State University and the U.S. Fish and Wildlife Service. 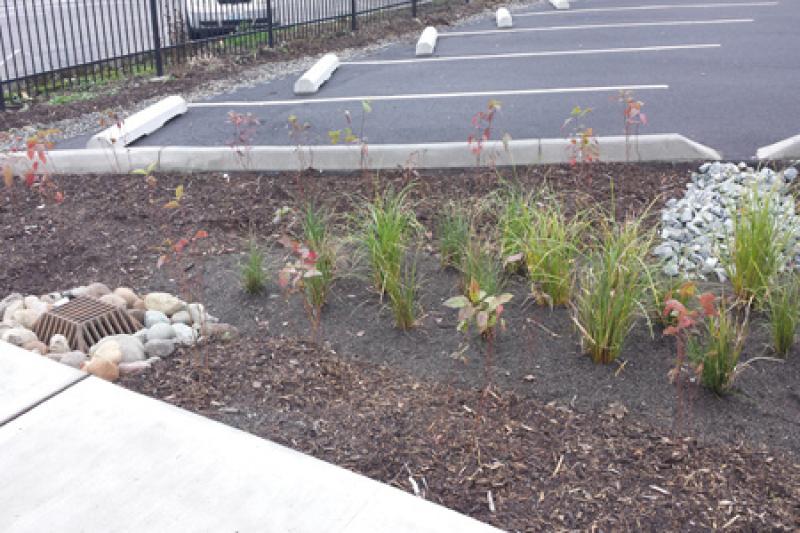 A simple column of common soil can reverse the toxic effects of urban runoff that otherwise quickly kills young coho salmon and their insect prey, according to new research by NOAA Fisheries, Washington State University and the U.S. Fish and Wildlife Service.

The affordable and remarkably effective treatment offers new promise for controlling toxic pollutants that collect on paved surfaces and wash off as stormwater into rivers, streams and the ocean. Polluted stormwater has been identified as a risk factor for many threatened and endangered salmon and steelhead and has caused die-offs of coho salmon in the Pacific Northwest..

The research builds on increasingly common building practices that promote natural infiltration of stormwater into the ground. It indicates that a “bioretention” system that first filters runoff through a basic soil mixture removes toxics lethal to aquatic life. Such systems are increasingly found in Washington State’s Puget Sound area as people build “rain gardens” that trap runoff before it gets to a creek or stream.

The research published in the journal Chemosphere examined the toxic effects of runoff collected from a major Seattle highway during storms. The untreated runoff killed all juvenile salmon exposed to it within 12 hours. But all fish survived in runoff filtered through the soil column of sand, compost and bark. The soil filtration also prevented reproductive damage to tiny insects salmon eat.

“This is a simple approach that can make a big difference in the quality of water flowing into our rivers and streams,” said Jennifer McIntyre, postdoctoral researcher at Washington State Universityand lead author of the new research. “In this case, the salmon and their prey are telling us how clean is clean enough.”

Researchers collected runoff from a four-lane Seattle overpass during six storms and transported it to Washington State University’s Research and Extension Center in Puyallup, where the experimental soil treatment columns were set up. The 12 “bioretention” columns measured two feet high and contained 60 percent sand, 15 percent compost, 15 percent shredded bark and 10 percent water treatment residuals, with half also planted with a common sedge.

Untreated runoff regularly killed aquatic insects such as mayflies but filtering the runoff through soil columns, with or without plants, “conferred complete protection against the lethal toxicity of stormwater runoff,” the scientists wrote. The polluted stormwater also quickly killed coho salmon, but all fish survived exposure to the same runoff after treatment.

but all fish survived exposure to the same runoff after treatment. “The positive effects on survival are really striking,” said Nat Scholz, manager of the Ecotoxicology Program at NOAA Fisheries’ Northwest Fisheries Science Center and a coauthor of the research. “This is an encouraging lesson for people working to reduce stormwater impacts to salmon habitats.”

Chemical analyses showed the bioretention treatment reduced toxic metals by 30 to 99 percent, reduced polyaromatic hydrocarbons that are byproducts of fossil fuels to levels at or below detection and reduced organic matter by more than 40 percent.

The scientists suggested that further research examine different soil mixes and the reliability of bioretention treatment over time. Additional studies could also examine whether soil filtration protects salmon from more subtle forms of toxicity, including effects on early development, the endocrine system and susceptibility to disease.

The new study is part of a longer-term research effort to develop inexpensive and effective clean water technologies. The work was funded by the U.S. Environmental Protection Agency (Region 10) and NOAA’s Coastal Storms Program.