The 2015 Hawaiian monk seal population census reveals a "remarkable" increase in survival rates and a new total population estimate for the native seal of Hawaiʻi. 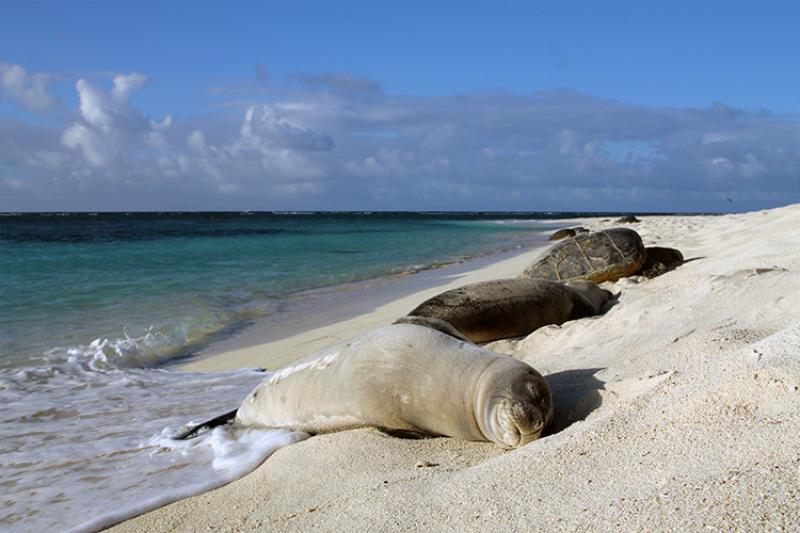 The Hawaiian monk seal has been in decline since the 1950s and lost nearly 70 percent of its population between 1958 and 2006. In recent years, the decline has slowed in the remote Northwestern Hawaiian Islands (NWHI), and a population of seals has reestablished itself in the main Hawaiian Islands and is increasing.

NOAA recently completed the 2015 population census for seals across the archipelago and according to Dr. Charles Littnan, lead scientist for NOAA's Hawaiian Monk Seal Research Program, things look good. "Overall, we see a lot to be positive about. There were at least 184 pups born across the range, which is up from 156 pups in 2014. Across sites and age classes, monk seal survival from 2014 to 2015 was remarkable; the best that has been in the NWHI in many years-in some cases the best observed in three decades."

This increase in survival, particularly for juveniles, is critical for the recovery of the species. At one point, less than 1 in 5 seals born in the NWHI was surviving to adulthood, which is bad for the species.

Littnan explained, "Too many young seals were dying, which meant too few females were growing up to be mothers. The species was in a downward spiral. Over the last few years we have seen juvenile survival jump pretty dramatically, giving hope for the future."

This increase in survival can be partially explained by the numerous interventions performed by the monk seal program and their partners.

In 2015, there were a total of 68 interventions to save seals. These include surgeries to remove fishing hooks, disentangling seals from marine debris, medical interventions for sick and injured seals, rehabilitation in medical facilities, and reuniting mothers and pups. These types of activities have been ongoing for the last 30 years and the results are significant. Up to 30 percent of seals alive today owe their existence to a life-saving intervention.

One of the most exciting outcomes of the complete census of the island chain is a new total population estimate for Hawaii's native seal.

Past estimates used separate counts from the NWHI and the main Hawaiian Islands and missed a few key subpopulations. For the first time ever, the monk seal program has estimated the entire population of seals. The total number, 1,272 seals, is higher than previous estimates of around 1,100.

"This is a great step forward for our work with monk seals. For the first time and with a lot of effort by our field teams and volunteers, we were able to incorporate every location where seals are found. We will need to continue to utilize this method of calculating the population for a few additional years before we can definitively identify a trend. Regardless, this is a better estimate and there are more seals than were estimated with previous methods," said Littnan.

However, despite the good news there is a long way to go before monk seals are out of the proverbial woods. In an effort to continue to support this type of progress toward the seals' recovery, NOAA Fisheries released a five-year Priority Action Plan for the Hawaiian monk seal on February 10, 2016, as part of a nationwide "Species in the Spotlight: Survive to Thrive" initiative.

NOAA Fisheries identified "spotlight" species as those most at-risk of extinction in the near future, but with high potential for recovery given appropriate support and management. The Hawaiian monk seal, or ʻilioholoikauaua, was selected alongside seven other species including the Pacific leatherback sea turtle and Southern resident killer whale. The purpose of this initiative is to better focus internal recovery actions, as well as to motivate other organizations and interested citizens to partner with NOAA Fisheries on these actions and turn the decline of these species around.

Five key actions that can be taken in the near-term to prevent extinction and encourage monk seal recovery are presented in the Species in the Spotlight Plan. These actions range from increasing juvenile survival in the Northwestern Hawaiian Islands, to preventing disease outbreaks, to encouraging community stewardship and citizen science.

In order to successfully implement these actions, the plan places a heavy emphasis on the importance of partnerships and collaboration. Reversing the decline of an endangered species is a challenging task; one far easier accomplished as a joint effort encompassing federal and state government, environmental organizations, members of the community, and other diverse partners.

Marjorie Ziegler of the Conservation Council for Hawaii said, "Recovering the critically endangered ʻilioholoikauaua is a top priority for the Conservation Council for Hawaiʻi, so we are pleased to see the release of the Species in the Spotlight Action Plan. We are ready to partner with the NOAA Fisheries, State, and people of Hawaiʻi to ensure our keiki and generations to come know and enjoy the seal as we do."

NOAA Fisheries sees the Species in the Spotlight Plan as a complement to the recently released Main Hawaiian Islands Monk Seal Management Plan.