The NWFSC’s Point Adams Research Station, located at the mouth of the Columbia River at Hammond, OR, is home to 30 scientists and staff who spend most of their time shadowing salmonids, or their predators, for a living. 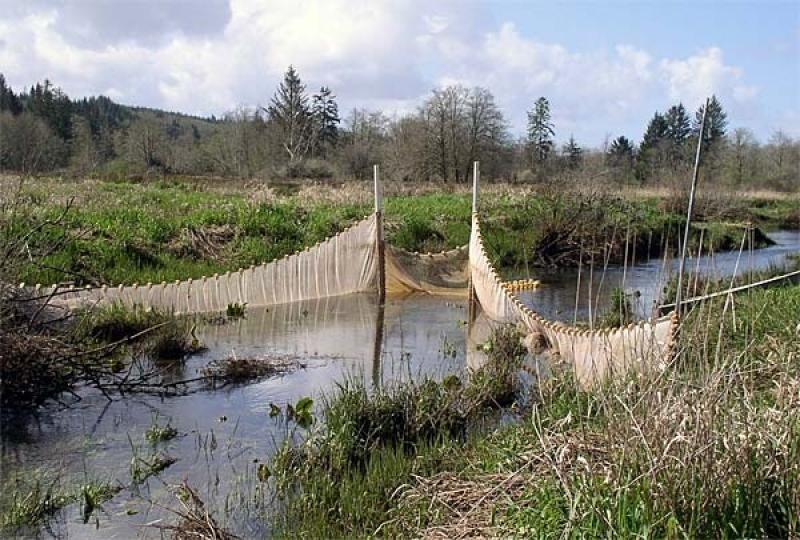 Point Adams fishery biologists are tagging and tracking a small proportion of the approximately 2.5 million juvenile salmonids along their migration route down the Snake and Columbia Rivers, past numerous man-made and natural obstacles—including hydroelectric dams and hungry seabirds—before they enter the ocean.

The NWFSC’s Point Adams Research Station, located at the mouth of the Columbia River at Hammond, OR, is home to 30 scientists and staff who spend most of their time shadowing salmonids, or their predators, for a living.

Thirteen Columbia River Basin salmon stocks are currently listed as endangered or threatened under the Endangered Species Act. Advancing our scientific knowledge of migration and survival of these stocks through the Federal Columbia River Power System (FCRPS) is essential to supporting ongoing salmon recovery efforts in the region.

Earlier this month, Pt. Adams staff helped set up and implement a tour of lower Columbia River restoration sites and discussion of salmon recovery issues for the Northwest Power Planning Council’s Independent Science Advisory Board and Independent Scientific Review Panel. In total, over two dozen scientists and a reporter from the Daily Astorian attended, learning about NWFSC's research in Columbia River, estuary, and Pacific Ocean. This research is critical in the current negotiations related to NOAA’s 2008 Biological Opinion governing the operation of the FCRPS. (See the NOAA press release “NOAA Strengthens 2008 Columbia River Plan”, September 15, 2009).

Fisheries biologist Dick Ledgerwood and his team use passive integrated transponders (or PIT tags)inserted in juvenile salmon and steelhead to measure survival through the FCRPS from the Snake River trap to Bonneville dam. Tagged fish are scanned as they pass through a specialized trawl net with built-in underwater antennas. Digital PIT-tag data identifies individual salmon and tells scientists how many salmonids have survived the journey past upstream dams.

In the lower Columbia River, Curtis Roegner and others are currently monitoring multiple habitat restoration projects to determine how well they contribute to salmon survival. Degraded wetland systems with impaired water flow provide inadequate habitat for salmonids and other native flora and fauna. Reconnecting these systems to tidal fluctuation can restore material exchange between wetlands and rivers or estuaries, expanding the available habitat. Additional research will determine how much habitat is needed to increase salmon diversity, as restored habitat is likely to increase the overall resilience of diverse salmon stocks to anthropologic disturbances and climate change.

Near the mouth of the Columbia River at the Washington-Oregon border, fisheries biologist Jen Zamon and her group are tracking sooty shearwaters and common murres to better understand interactions of local seabirds and fish populations in the California Current Ecosystem, an area of productive coastal waters off the western United States. Genetic analysis of the fish bones in a seabird’s stomach can reveal the number of different fish species that were consumed and where they originated. Satellite tags can also help scientists track their movements in the estuary and better understand how seabirds respond to regional changes in ocean and climate conditions.