By targeting Antarctic krill hotspots, the krill fishery can have outsized negative impacts on penguins while still remaining under the catch limit. 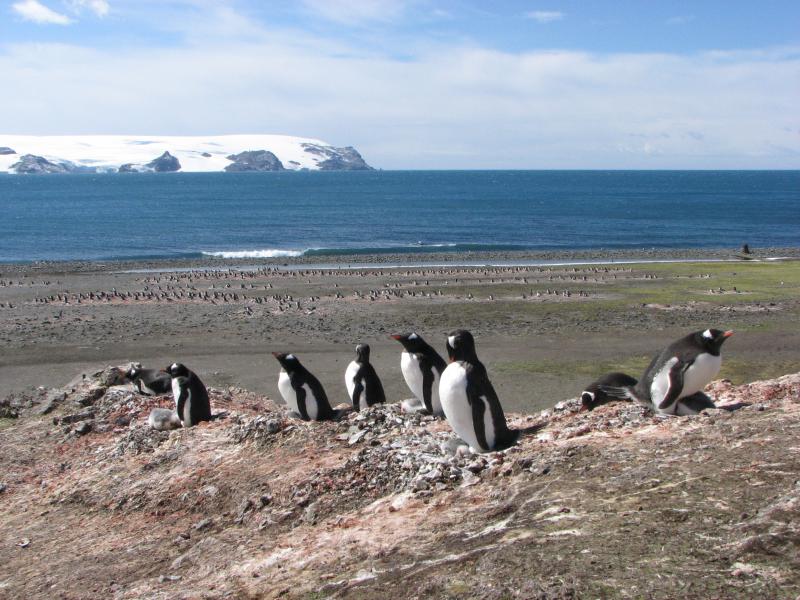 The impacts of concentrated fishing for krill around the Antarctic Peninsula has outsized impacts on some of the world’s largest populations of penguins, a new study shows.

“Penguins and fur seals in Antarctica depend on krill, so we need to understand how much impact removals of krill have on these animals we care about. We have demonstrated that human activities like fishing can add to the impacts of climate change. So we can take actions that will help lessen those cumulative impacts,” said George Watters, lead author of the study.

The research article on these findings was written by Watters, Jefferson Hinke, and Christian Reiss of Southwest Fisheries Science Center’s Antarctic Ecosystem Research Division. It was published in Nature Scientific Reports in February 2020 and was featured by NOAA last year. Now it is among the top 100 Scientific Reports ecology papers of the year, with more than 2,000 downloads.

Watters and his team analyzed more than 30 years of data from our two Antarctic field stations on how successfully penguins breed and where they forage. The current catch limit for the krill fishery around the peninsula is less than 1 percent of the total krill population. However, the team found that concentrated fishing where penguins commonly feed, particularly during the Antarctic winter, may negatively affect penguin populations.

“Winter matters because immediately after the breeding season, penguins molt—lose and then regrow their feathers—and lose a lot of their mass. Winter conditions in Antarctica are gnarly, and penguins need to forage and recover their body condition to be able to survive,” said Watters.

The krill fishery is the largest in the Southern Ocean, with a reported catch of approximately 1.1 trillion pounds in 2020. Most krill caught by the fishery is turned into feed for aquaculture and other farmed animals. However, in recent decades, demand for nutritional supplements made from krill oil has increased. Global sales surpassed $350 million in 2018 and sales are projected to reach nearly $850 million by 2026. Krill are high in omega-3 fatty acids, which play a key role in cardiovascular health.

Recently, the fishery has shifted most of its effort to winter. This is when krill form large aggregations in predictable areas that are now accessible to fishing vessels because of reduced sea ice cover during winter. Annual catch limits for the fishery are set by the Commission for the Conservation of Antarctic Marine Living Resources.  They are largely based on recommendations from scientists who monitor populations of penguins and krill in areas targeted by the fishery.

The Commission considers the current catch limit around the Antarctic Peninsula to be conservative because it is small relative to the total biomass of krill in the Southern Ocean. However, fishing vessels target “hotspots”—known areas where krill aggregate and penguins feed—and can deplete local krill populations in important foraging areas.

Spread Out Fishing to Lower the Risk of Hotspots

Watters found that by targeting hotspots, the fishery can have outsized negative impacts on penguins while still remaining under the catch limit. These results are concerning, as several fishing countries want to increase the limit. “If you have a higher catch limit, you want to spread out the fishing in time and space. That way you minimize the concentration in any one location. The lower the catch limit is, then you worry less about spreading things out because the concentration is not as high,” said Watters. One way to spread out fishing, Watters said, is to establish smaller “management areas” within the fishing grounds, and set catch limits for each area.

This study shows a link between concentrated fishing and penguin performance. Watters stresses that more research is needed to determine whether fishing in hotspots can have long-term consequences for penguin populations.

Watters hopes that this study demonstrates the value of long-term monitoring programs for managing marine resources. “Long-term monitoring is not typically viewed as exciting. You have to commit a lot of funding and resources to it and because it’s long-term, your investment takes a while to mature. But this paper illustrates that waiting for maturity is worthwhile because we’ve learned that there actually can be an impact at the current level of fishing on predators, and that’s what we need to know to manage the fishery from an ecosystem perspective.”

Read more about our efforts to monitor penguin, seal, and krill populations using advanced technologies and software applications, and how our data support fishery management by the Commission for the Conservation of Antarctic Marine Living Resources.