A recently published journal article describes how scientists used UAV technology to get an entirely new view of a threatened population of killer whales. 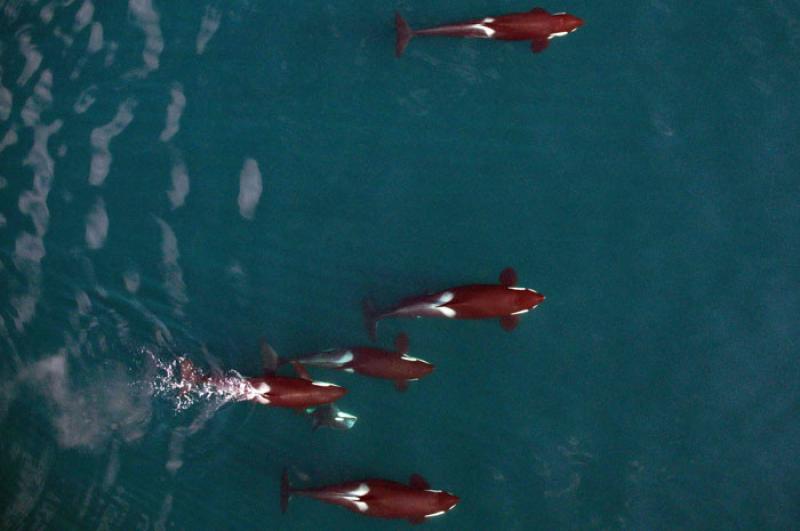 Last year, for the first time, scientists used an unmanned aerial vehicle, or UAV, to study killer whales from above. In an article published this month in the Journal of Unmanned Vehicle Systems, scientists describe how they configured their UAV, turning it into a precision scientific instrument.

The international team of scientists from NOAA Fisheries and the Vancouver Aquarium used the UAV to take straight-down photos of the Northern resident killer whales, a group of animals that frequent waters near Vancouver Island, British Columbia, and that are listed as threatened under Canada’s Species At Risk Act.

The photos from the UAV are not only stunningly beautiful, but loaded with data and diagnostic detail.

“We’re taking photographs not just because they look good, but because we can make very precise measurements from them,” said John Durban, a marine mammal ecologist with NOAA Fisheries. “We can’t put a whale on a scale, but we can use aerial images to analyze their body condition—basically, how fat or skinny they are.”

By analyzing the photos, scientists are able to determine, among other things, whether the whales are getting enough to eat. This is important because the Northern residents feed mainly on Chinook salmon, and scientists suspect that low Chinook numbers may be limiting the growth of the whale population.

The team used a type of UAV called a hexacopter, so-named for the six helicopter-type rotors that bear it aloft. According to the journal article, at least two characteristics of the hexacopter contributed to its success.

First, the vehicle is relatively quiet. Scientists kept the hexacopter at least 100 feet above the whales at all times, and at that altitude, the whales appeared to be unaware of its presence. This is important because marine mammals are extremely sensitive to sound. To minimize risks, the scientists are trained to recognize whether their activities disturb the whales, and they operated the UAV according to the rules specified in their research permit.

Second, in addition to being outfitted with a high-resolution digital camera, the hexacopter also carried a pressure altimeter. Knowing the precise altitude at which each photo was taken, and the focal length of the camera’s lens, scientists were able to calculate the size of objects in the photos to within 5 centimeters.

Scientists have been using manned aircraft for photogrammetry studies like this for decades. But manned aircraft are expensive to operate, especially in remote locations. Also, hexacopters can get much closer to the whales than manned aircraft, which have to maintain a greater altitude both for safety reasons and to avoid disturbing the whales.

Being able to get close to the whales is what makes this technology so useful.

“Because the image resolution is so great, we can monitor very small changes in an animal’s condition from year to year,” Durban said, noting that scientists can recognize individual killer whales based on their unique pigmentation patterns. That will allow scientists to analyze how ups and downs in Chinook salmon populations impact the killer whales.

“We’re using technology to answer some very simple questions about these animals based on their size and shape,” Durban said. “I don’t think science has to be complicated to be powerful, and this is an extremely powerful new tool.”