This article is the second piece in a two-part series about NOAA Fisheries' summer intern Christopher Lindsay. 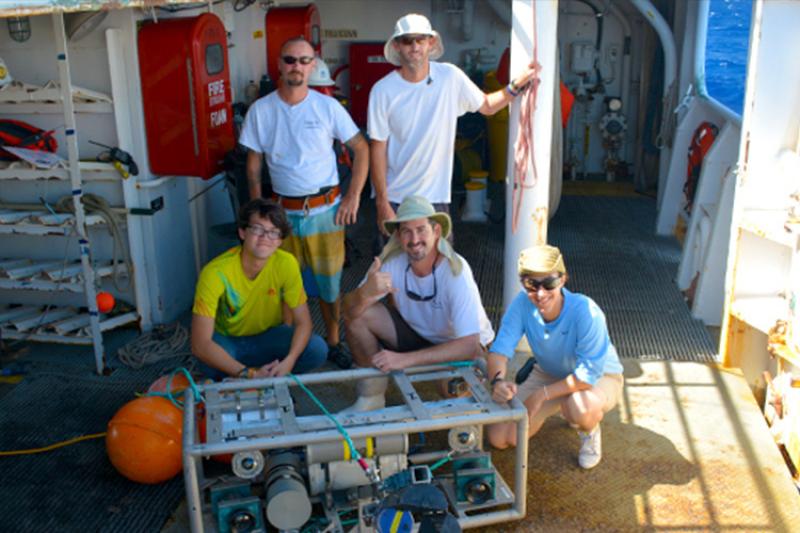 Read the first piece of the story, Journey to NOAA Fisheries.

At 16 years old, he has already been published in the scientific literature and has won numerous awards at science fairs, including a highly coveted internship with NOAA Fisheries.

This "dream prize," as Linday calls it, was earned from original research he conducted on Hawai'i's deep-water marine biota living on and off discarded WWII munitions. He conducted this research using a cheap photography system he originally designed with several other students at 'Iolani School for a different research project.

"Most 16 year olds are not concerned with things like that," says NOAA Fisheries science operations logistics leader Chris Demarke, who worked with Lindsay during his NOAA internship in the summer of 2015. "When I was 16, I was thinking about surfing and fishing."

The Deep 7 bottomfish lehi (silverjaw snapper), ehu (squirrelfish snapper), onaga (longtail snapper), opakapaka (pink snapper), kalekale (Von Siebold's snapper), gindai (Brigham's snapper), and hapu'upu'u (Hawaiian sea bass) are the most sought-after commercial bottomfish within the state. These fish are co-managed by the federal government and the State of Hawai'i federal quotas cap the number of bottomfish that fishermen can catch in a given year, and the state closes relevant near-shore fisheries once those quotas are met, helping to curb overfishing and ensure the sustainability of the fishes' stocks.

But current stock assessments that inform the quotas are solely based off catch and effort data from fishermen a proxy for abundance that doesn't provide a true assessment of population health.

To get a better handle on the bottomfish abundances, the NOAA Pacific Islands Fisheries Science Center (PIFSC) launched a project in 2011 that's testing out several "gears," or technologies: standardized catch data from cooperative fishermen, active acoustics, cameras onboard an autonomous underwater vehicle, and stationary video landers that drop cameras to the seafloor for a set period of time.

For his summer internship project, Lindsay set out to develop a cheap camera system much like the one used in his science fair project that complements BotCam and MOUSS. Such a system, which would be orders of magnitude cheaper than MOUSS, could theoretically be distributed to fishermen to increase the amount of data collected on bottomfish populations and reduce operation costs, without the worry of losing tens of thousands of dollars' worth of equipment.

This expendability is also valuable for Lindsay's own research on munition-loving marine biota.

"A lot of places where the munitions are dropped aren't ideal for putting down very expensive equipment," Lindsay explains. "There are big cable piles with lots of munitions stuck in it and lots of animals living on it, and if [scientists] wanted to look at that and not use a $20,000 piece of equipment, they can just put one of mine down. If it doesn't come back, that's only $80."

A Taste of the Scientific Process

For the internship, Demarke and others at PIFSC wanted to provide Lindsay with a taste of what it's like to be scientist at NOAA Fisheries.

To start, they had Lindsay give a presentation about his science fair project, providing them with a better understanding of the new intern's personality, experiences, and scientific interests.

"We pretty much found out that he's a really good speaker," Demarke says. "He holds himself very well, and his interest is in underwater camera systems."

The next step, Demarke explains, was for Lindsay to write a proposal that details a project for the summer that includes anticipated costs and how the project fits in with NOAA Fisheries' goals.

"For this NOAA internship, I wanted to build a cheaper underwater camera system," Lindsay says, adding that he also wanted his system to have a "cleaner" design.

NOAA Fisheries liked the proposal, and decided to fund Lindsay's project. Demarke and Lindsay worked together to create a list of necessary equipment parts, and Demarke made sure Lindsay got everything he needed. 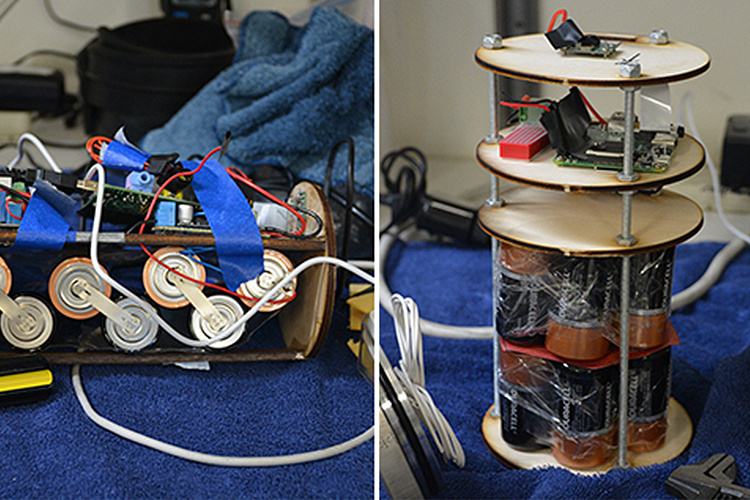 During his internship, Lindsay modified and improved the internal component of his old underwater camera system (left) to create a better organized and longer-lasting system (right).

From here, Lindsay set to work on redesigning his previous underwater camera system, which consisted of a Raspberry Pi computer board and camera, an LED lighting system, two D-cell battery packs, two aluminum cylindrical housings with see-through acrylic caps, and a waterproof cable that connects the camera and lighting modules.

Specifically, he implemented a cheaper, smaller, and more energy-efficient Raspberry Pi computer board, and reconfigured the internal components of the housings.

While the old system basically had only two divisions to its internal components (one side for the batteries and the other for everything else), his new design organized the internal components into well-defined layers this construction, combined with the smaller Raspberry Pi, allowed Lindsay to fit twice as many batteries into the same space, resulting in a significantly longer-lasting camera system.

He also created a new housing for the camera and lighting systems, switching from aluminum to a much cheaper store-bought PVC-tube (still with machined acrylic caps).

In October, PIFSC scientists initiated a project to compare MOUSS with its predecessor, requiring them to drop both camera systems mounted together on a "Frankenframe" into the depths of the Maui Triangle an area between LÄna'i, Kaho'olawe, and Maui. They invited Lindsay along for the last two working days of the 13-day trip to attach his Raspberry Pi-PVC system on to the frame as well, sans the flashing light system, which would otherwise scare off the bottomfish the team was trying to assess.

Minors aren't typically allowed on NOAA ships, and Lindsay wasn't given permission for the trip until a week before his planned launch date. "It's fairly momentous in that fact, that we had a 16-year-old come out onto a NOAA ship," Demarke says. By going on the ship, Lindsay would have the opportunity to collect data for his project firsthand.

"One of the really cool things about having [Lindsay] with us was seeing a junior in high school developing camera systems and getting to go out with his systems as part of a federal pilot survey," says PIFSC biologist Benjamin Richards, who leads PIFSC's fishery-independent bottomfish survey efforts and was the science advisor on the Hi'ialakai trip. "That's exactly what we want to see in the future; that's what we want to see every high school student doing and dreaming about."

Throughout the trip, the crew was favored with calm seas and pleasant weather, which allow more natural light to reach the cameras at the depths. But not enough sunlight for the Raspberry Pi system.

"I was very fortunate to go on this trip," Lindsay says. "The Raspberry Pi, I've learned, pretty much needs light when you go beyond 30 meters." He has now incorporated the data he's collected from his Hi'ialakai tests with data from other programs and deployments for a new science fair project.

Demarke, Richards, and others hope to continue working with Lindsay on developing cheap camera systems for fishermen to use a partnership that Lindsay is "definitely" interested in and benefits both him and NOAA Fisheries.

"One of the things we are always interested in is kick-starting innovation," Richards says. "The more people we could get interested in this type of work, the better."

"A lot of times when you're working on this stuff, you can kind of get stuck working in a tunnel," Demarke adds. "And so to have that viewpoint, a different perspective from a younger mind who maybe is not so influenced by life's experiences, we can definitely feed off him and he'll feed off us."

It's unclear at this point what kind of camera system might result from this collaboration. With more research, Demarke says, it may turn out that the Deep 7 aren't skittish with certain types of light, allowing NOAA Fisheries to use a modified version of Lindsay's Raspberry Pi system. On the flip side, research may instead show that something a little more expensive, like a GoPro camera, may be best.

Importantly, aside from his inexpensive camera system, Lindsay also brought onboard the Hi'ialakai several GoPro cameras with specially purchased housings that are rated for up to 300-meter (1,000-feet) depths. The scientists wanted Lindsay to come up with small cameras that could capture high-quality images in low-light conditions and be attached to the Frankenframe to provide multiple-angle views not seen with the BotCam or MOUSS systems, which face forward at all times. "GoPro was pretty much the only camera that came to mind," Lindsay says. 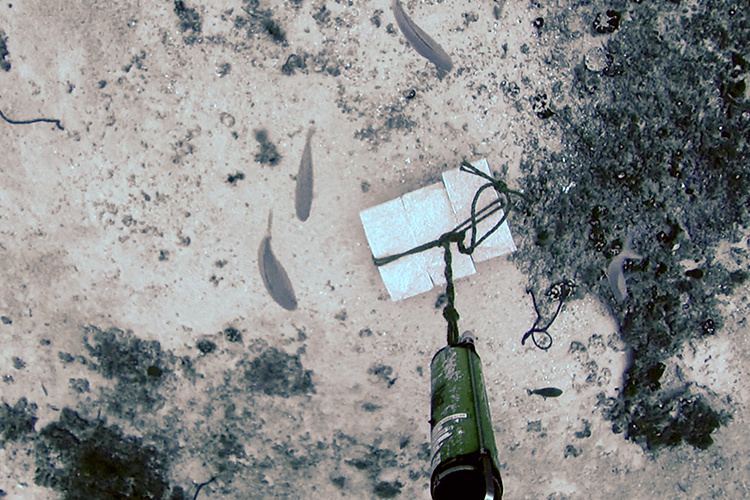 At a science talk held on the last evening of the trip, Lindsay expertly described his project to the scientists and crew of the ship. He also showed off some of his GoPro footage, which included a downward view of the Frankenframe as it touched down on the seafloor and a group of opakapaka swarming around the baited Franken-frame.

"Oh, that is a nice shot," one person exclaims. "That is a really cool video," another says.

At the end of the presentation, the crowded room erupts into applause.