‘A‘ohe hana nui ke alu ‘ia: No task is too big when done together by all. 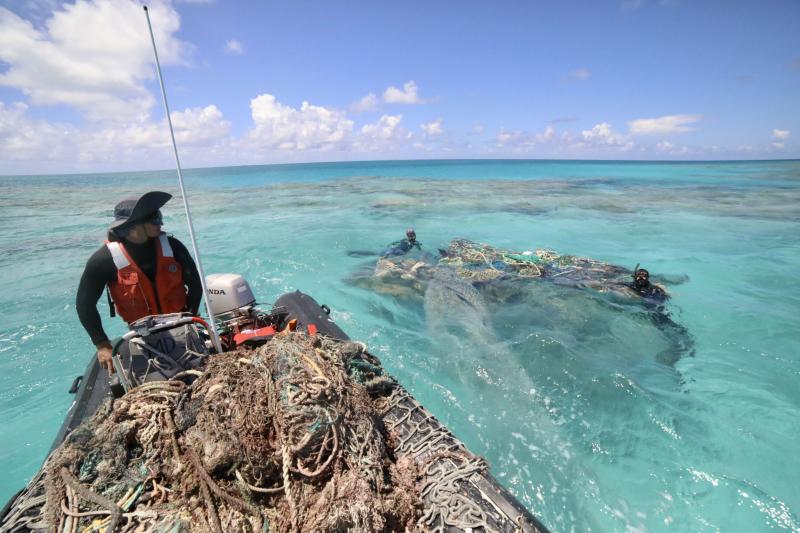 Scientists and divers from NOAA’s Pacific Islands Fisheries Science Center and local nonprofit Papahānaumokuākea Marine Debris Project (PMDP) returned to Honolulu on September 22, 2021, from a 30-day mission. The team removed marine debris from the shallow reefs and shorelines of the Papahānaumokuākea Marine National Monument. These remote islands and atolls are centered among Pacific currents that carry lost and abandoned fishing nets and gear from all over the Pacific Ocean. The debris entangles wildlife and damages corals. Even during this mission, the team disentangled a 5-year-old female Hawaiian monk seal from derelict fishing rope.

The project staff collect valuable data during these missions:

The team of 16 divers expected to remove more than 110,000 pounds of derelict fishing nets, plastics, and other marine debris. Over only 18 days, they collected even more—nearly 124,000 pounds of debris—from these islands, atolls, and reefs of the monument:

Our teams found more derelict fishing nets in Papahānaumokuākea than any other type of marine debris by weight. This year, they collected 118,400 pounds, including 295 large nets, from the reefs and shorelines of these remote islands.

On Kamokuokamohoaliʻi, they found by far the greatest amount of nets across the islands—42,960 pounds—including 195 large nets. The Kamokuokamohoaliʻi living reef system is particularly vulnerable to nets, which smother and block shallow corals from the sunlight they need to survive.

Kuaihelani, on the other hand, is composed of land and reef. Its shoreline collected approximately two times the weight in nets than its reef: more than 16,000 pounds. Still, the team found and removed 35 large nets from its reef. The island of Kapou also collected more than 11,000 pounds of derelict net since the last removal mission.

Plastics and Other Debris

The shorelines of Papahānaumokuākea collect a variety of plastics and other marine debris. The report from the 2018 mission classified the majority of this debris as plastic fragments, buoys and floats, bottles and bottle caps, and oyster aquaculture spacers. The debris can be anything from shoes to cigarette lighters.

The highlight of the mission was the successful disentanglement of a 5-year-old adult female Hawaiian monk seal, identified as “VH26.” She gave birth to a pup earlier in the summer. The entangled seal was first spotted just days prior to the marine debris team’s arrival on September 6.

“Each female, especially within an endangered mammal species like the Hawaiian monk seal, is so critical to protect because of their ability to rear offspring,” states James Morioka, the project lead from the Pacific Islands Fisheries Science Center. “Saving an adult female seal can effectively save a whole new generation of monk seals.”

“We just happened to be in the right place at the right time, and we are happy that we were able to lend our support to the successful disentanglement,” James Morioka adds. “Our work to remove marine debris from the environment is with the hope that entanglements like these are few and far between.”

All of the intensive training, preparation, and hard work paid off and will continue.

“Nearly 124,000 pounds of marine debris is now off of the reefs and shorelines, and out of harm’s way, but that’s just a drop in the bucket,” James Morioka states. “Until major changes occur globally, there’s going to continue to be a need for marine debris removal operations in Papahānaumokuākea for the wildlife and habitat.”

In the coming months, the marine debris team plans on ramping up their outreach and education efforts locally to inspire others within the community to create positive change. The Marine Debris Program is pleased to be a long-time supporter of the efforts to remove marine debris in the Papahānaumokuākea Marine National Monument.

From Marine Debris Program Director, Nancy Wallace: “Minimizing the impacts of marine debris to this significant natural and cultural landscape is extremely important, and we are proud of the progress the marine debris removal teams made during this mission.”