Eight students spent this summer working with the Northeast Fisheries Science Center's Atlantic Salmon Ecosystems Research Team at facilities in Massachusetts and Maine. It was an experience they won't soon forget. 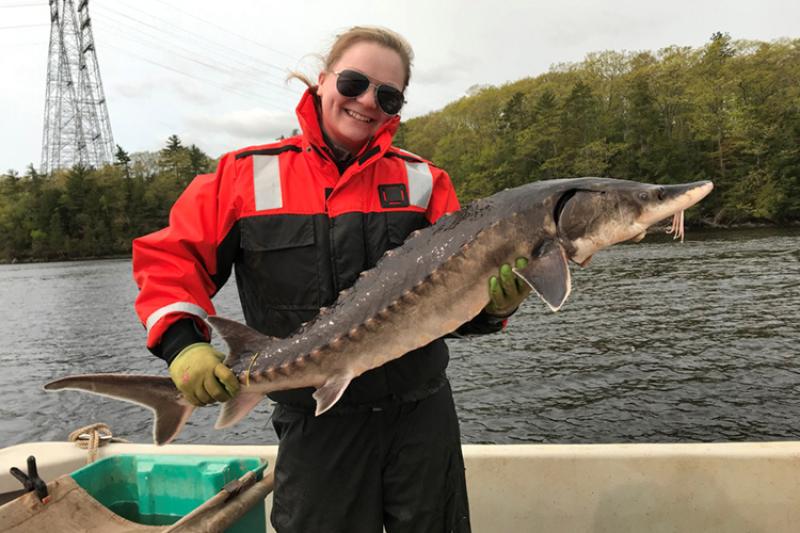 With summer winding down and college students returning to school to start the fall semester, most will talk about what they did this summer. For eight students working with the Atlantic Salmon Ecosystems Research Team, that meant hands-on learning about Atlantic salmon and other sea-run fish. They worked at the Northeast Fisheries Science Center’s Woods Hole Laboratory on Cape Cod and Maine Field Station in Orono. Their summer was spent on rivers, at fish hatcheries, and in labs from Massachusetts to Maine, including facilities of Maine’s Department of Marine Resources. Some of what they learned was academic, some practical—how to repel bugs, operate heavy machinery, and handle endangered fish. Some was social—working as a team and being open to new experiences. 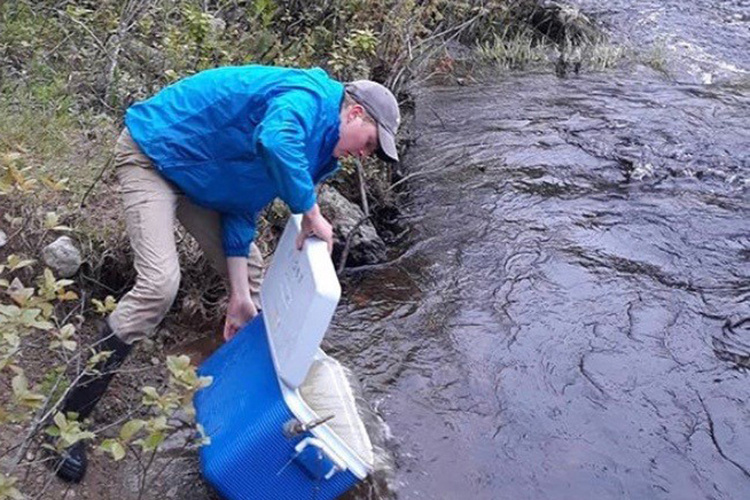 Owen VanDerAa releases smolts caught in traps at a dam fish passage back to the river. Photo: NOAA Fisheries

Owen spent the summer at Maine’s Department of Marine Resources in Jonesboro working on Atlantic salmon freshwater assessments and research. His tasks varied: cleaning tanks, feeding fish in a hatchery, fry stocking, trapping smolt and adults at a fish ladder to see what fish are making it through. He also worked on salmon habitat and river enhancement in the Narraguagus River. He loves fish, and since he studies resource management he had hoped his internship would provide a better understanding of the status of the resource. It did that, and more. “I learned how to handle salmon at the fry, smolt and adult stages of life, and also how to work heavy machinery. I now have a much greater understanding of the current state of the Atlantic salmon population and of their life cycles, and learned new ideas for salmon conservation." 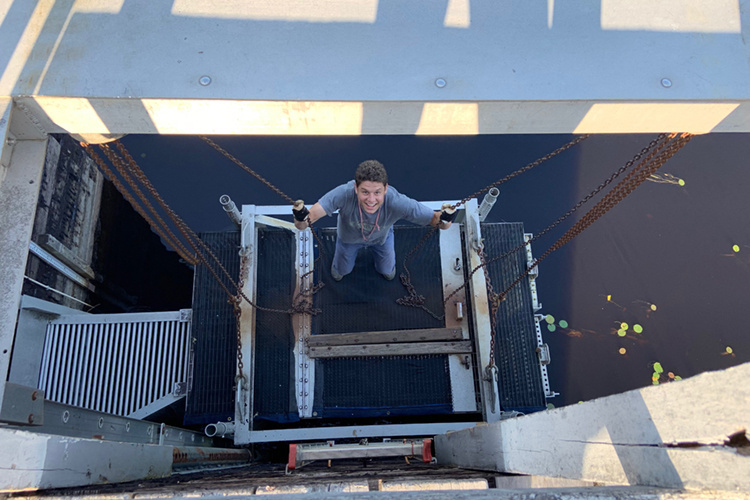 Andy Clement stands in a fish passage at a dam on the Narraguagus River. Photo: NOAA Fisheries

Andy is interested in the human aspect of fisheries and the jobs fisheries provides. He spent the summer working with Maine’s Department of Marine Resources in Jonesboro, working on Atlantic salmon freshwater assessments and research in the Narraguagus River. He hoped to get a better understanding of how scientists assess the health of an ecosystem from the perspective of the fish stock and its habitat. His tended the smolt and adult fish traps at fish passages at dams along the river. He also worked with the non-profit Project SHARE (Salmon Habitat and River Enhancement) to return the Narraguagus River to a healthy river with a natural flow and path. He said, “I have learned so much that I will carry with me in my future academic and career ventures, from the impacts we are having on river ecosystems, to what a healthy river looks like and how we can improve a river to try to restore endangered species like Atlantic salmon. I also learned how important outreach is and the importance of building a positive relationship with the community.” 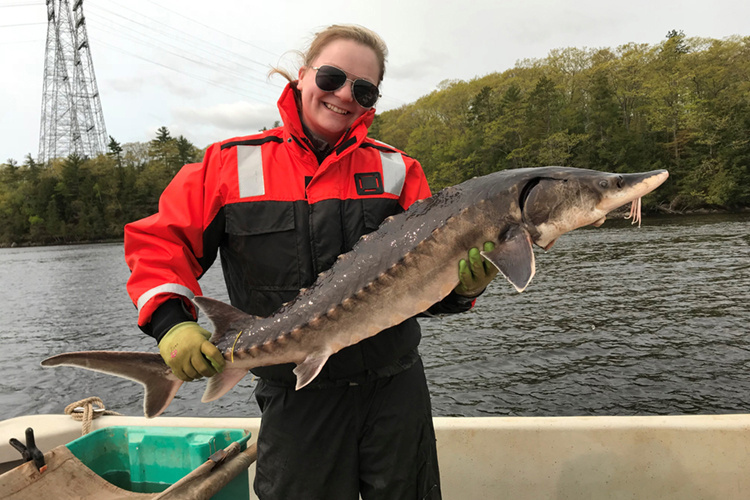 Miranda Lambert with an Atlantic sturgeon in the Penobscot River. Photo: NOAA Fisheries

Miranda is heading into her senior year at the University of Maine, where she has been interested in studying sturgeon populations. During her summer internship she wanted to broaden her knowledge of marine life in general and sturgeon populations in particular, especially how these fish are being affected by other species and the environment. She got her wish. As a research technician on a project studying sturgeon habitat, predator-prey interactions and population dynamics, she experienced the full range of a scientist’s tasks. From boat expeditions and handling prehistoric fish to mending nets, Miranda also collected and entered valuable information into a database that will be used in assessments that examine Penobscot River sturgeon populations. “This was an incredible experience that allowed me to expand on what I already knew as well as grow into a new knowledge of marine and freshwater science. I learned a great deal, experienced new things, was exposed to things pertaining to my major, and had the best time doing it.” 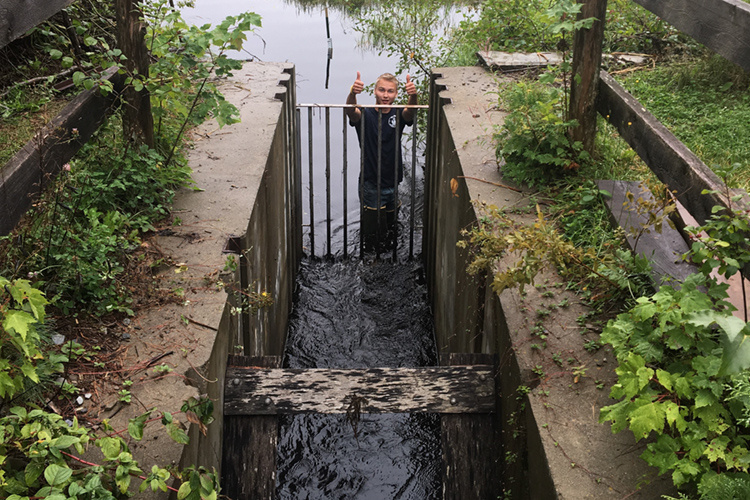 Growing up, Spencer Campbell was fascinated with water and what lived in it. This summer he had a chance to spend time on the water supporting the Maine Department of Marine Resources in Bangor. He monitored the annual returns of endangered Atlantic salmon to the Penobscot River at the Milford fishlift, where more than 1,000 adult salmon returned, the highest run since 2011. Spencer also supported broodstock collection, adult fish that are sent to the U.S. Fish and Wildlife hatchery for spawning. He also monitored other fish coming through the fish-way and removed invasive species, and stocked river herring from the Penobscot in lakes and ponds around the river’s watershed to create new breeding sites for river herring. Later in the summer he worked on habitat restoration projects with Project SHARE, a local non-profit organization that improves habitat for Atlantic salmon in the Narraguagus River. “This internship exceeded my expectations. I had the experience of a lifetime working with the Department of Marine Resources, and want to continue to work in this field.” 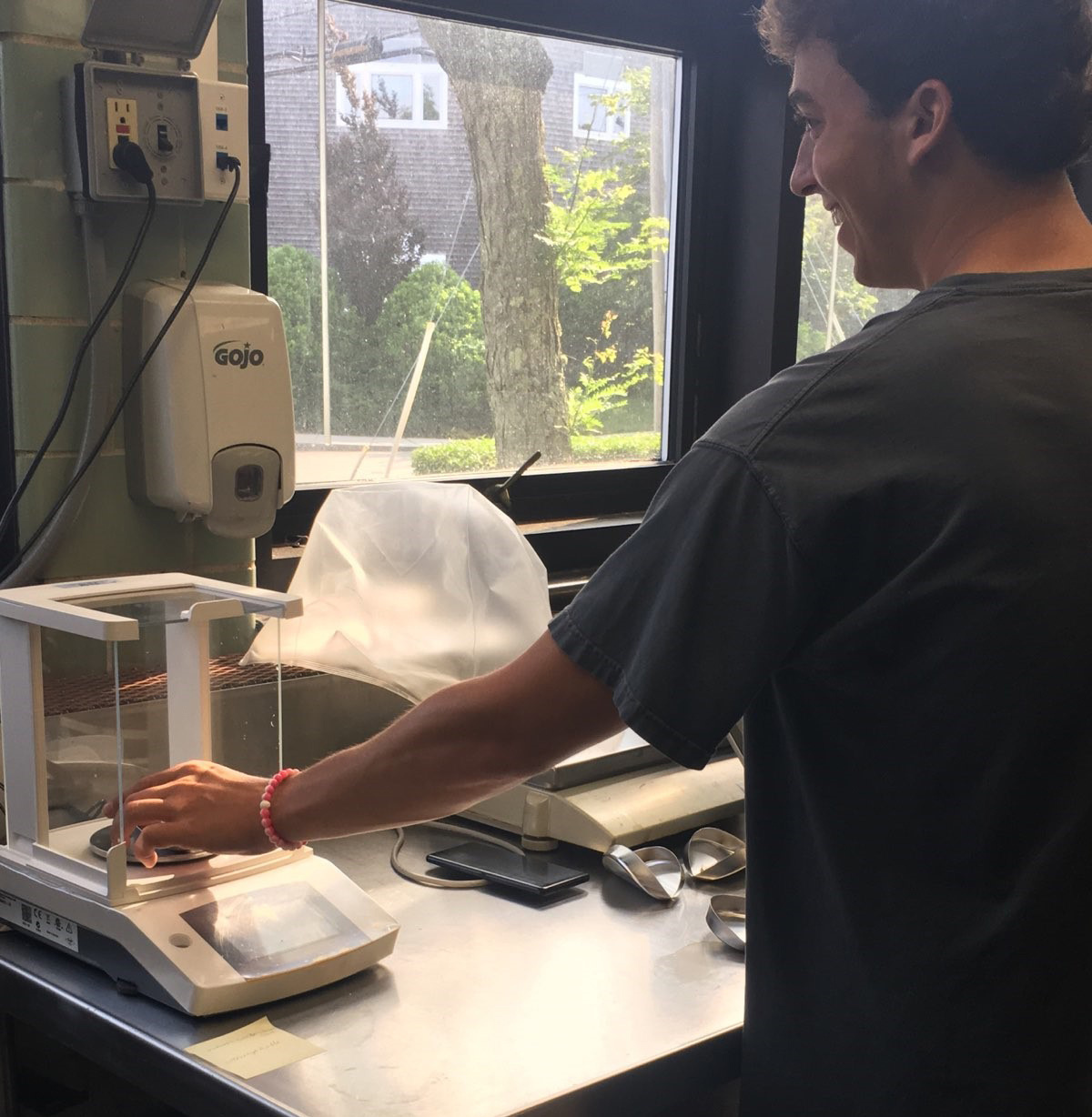 Brian spent his summer at the Northeast Fisheries Science Center’s Woods Hole Laboratory studying the energy-density dynamics of key prey species  found along the west coast of Greenland. That meant numerous hours in the lab looking at prey samples through a microscope and collecting weight and length data to be entered into a larger database. His efforts will help researchers analyze prey composition to determine how valuable these species are to the foragers, such as Atlantic salmon, that consume them. “This internship gave me the ability to work with others in a way I had never done before...I was able to take control of my work station, think critically, and consistently play a role as an important aspect of this program. Furthermore, I had the chance to consider what portions of the marine sciences field interest me and how I can become a better scholar and future scientist.” 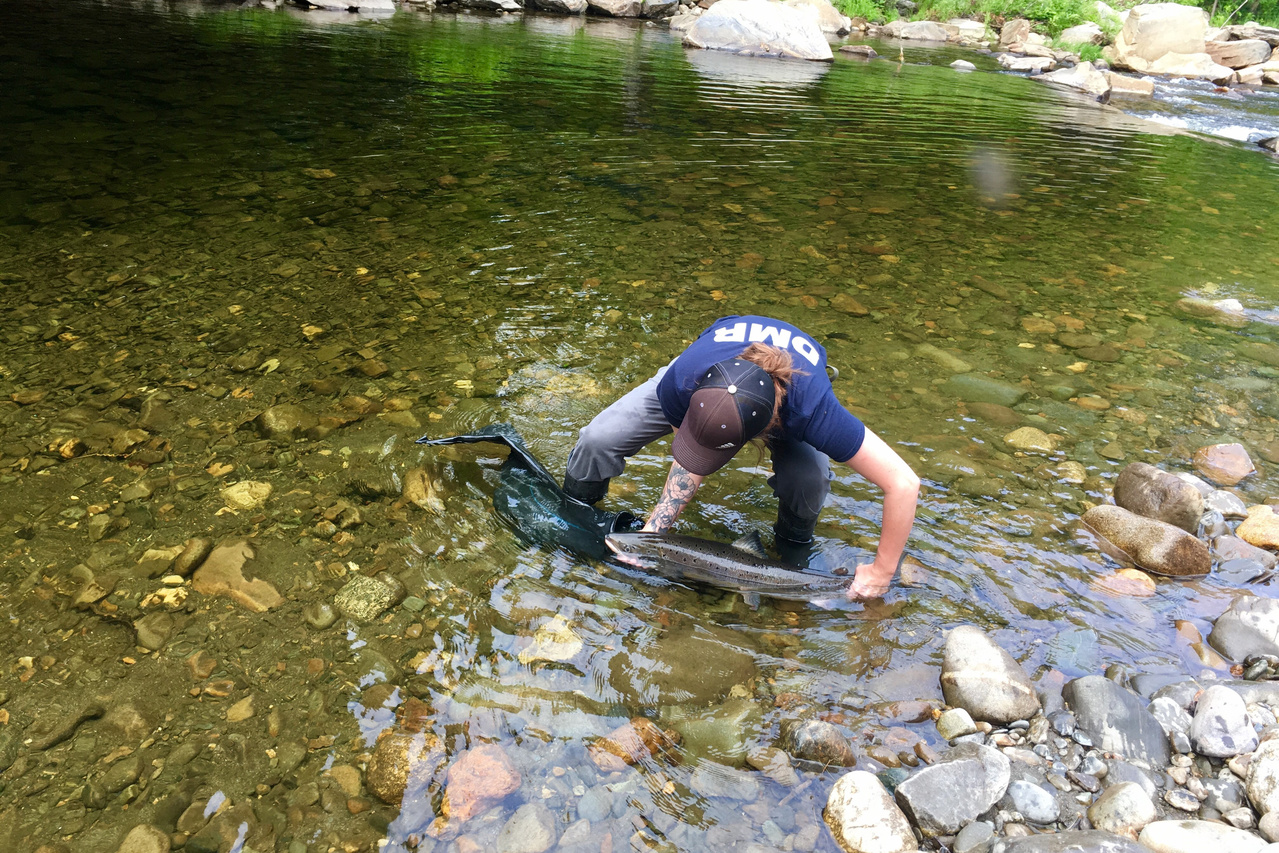 This summer marked Liberty’s third summer as an intern working with Maine’s Department of Marine Resources in Augusta. She credits her internship with shaping her entire university career as well as her love of Maine river ecology. Liberty’s tasks this summer varied: smolt and fry trapping on the Sheepscot River,  helping truck adult Atlantic salmon from the fish lift at Lockwood Dam on the Kennebec River where they are collected to the Sandy River where they can spawn, using the trucks to drive the salmon around other dams and impediments in the river along their natural migration route. “My time with Augusta Department of Marine Resources has been nothing short of extraordinary. Growing up on the banks of the Kennebec gave my love for the river a foundation, and this internship has built on that more and more each summer. I have worked with every life stage of Atlantic salmon, I have connected with outstanding scientists from all over, and I have learned so much about the river ecology in Maine.” 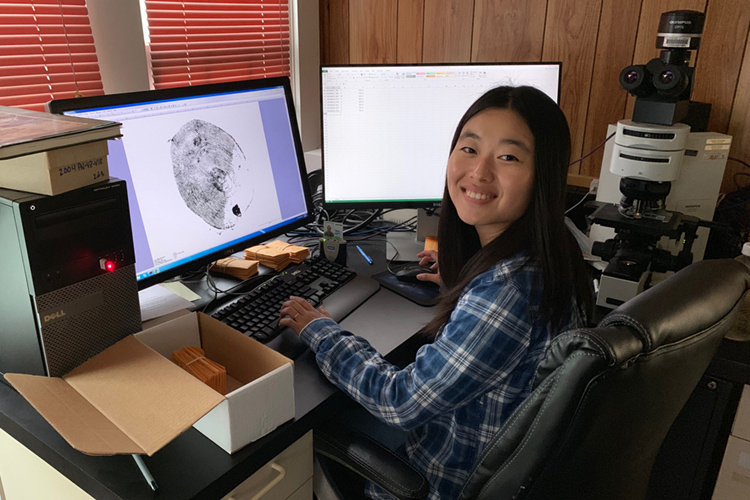 Rachel Kim at work in the cottage, home of the age and growth team at the Woods Hole Laboratory. Photo: NOAA Fisheries

A 2018 NOAA Hollings Student Scholar, Rachel spent her summer working at the Woods Hole Laboratory of the Northeast Fisheries Science Center focused on aging Atlantic salmon scales. While she had some experience working with fish in college, conducting research with environmental DNA from brook trout, working directly with fish parts was a very difference experience. Rachel worked in the age and growth lab and learned a lot about aging fish and what scales can tell you about the fish they come from.  Using scales from juvenile salmon, or smolts, collected at three sites in Maine’s Narraguagus and Sheepscot Rivers, she looked at growth rates in salmon at the various sites to see if there was a difference. A possible link between the length of time in freshwater and growth, and the possible impact temperature and river characteristics may have on migrating smolts, were also a focus of her project analyzing  salmon emigration patterns and growth to help inform recovery efforts. “Working alongside scientists in a professional lab setting was something I had looked forward to.” 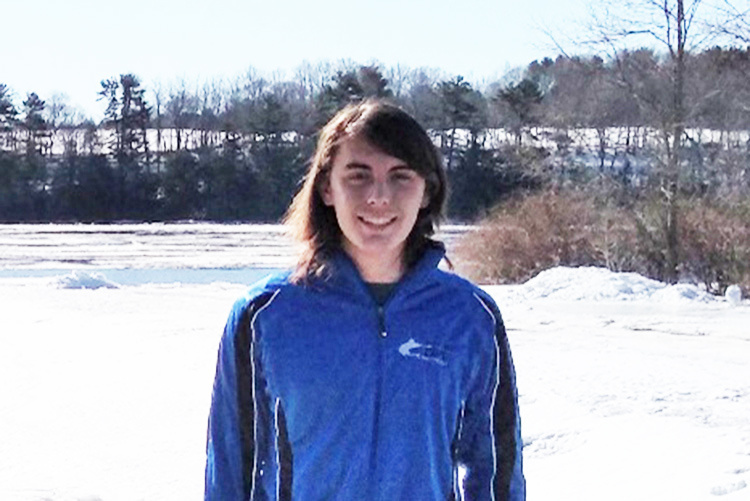 Justin grew up in Brunswick, Ohio and is interested in marine science, especially sharks and rays, SCUBA diving, writing and storytelling. A 2018 NOAA Hollings Scholar, he spent his summer collecting data at the Milford Dam fish trap, analyzing information from previous years, and creating time series graphs of the abundance of sea-run fish and some high abundance freshwater fish species in the Penobscot River. That meant he worked at the Milford fish lift, counting fish, stocking herring, handling and tagging salmon, as well as preparing microfiche slides of herring and salmon scales and using those scales to determine the age of the fish. He also helped with general upkeep of smaller local fishways, taking counts and clearing out plant obstructions. “Overall, I had a great time acquiring more field experience, and had the opportunity to meet people in the field I want to work in, all while gaining more experience in marine and aquatic science.