The Tale of the Dread Pirate Runku 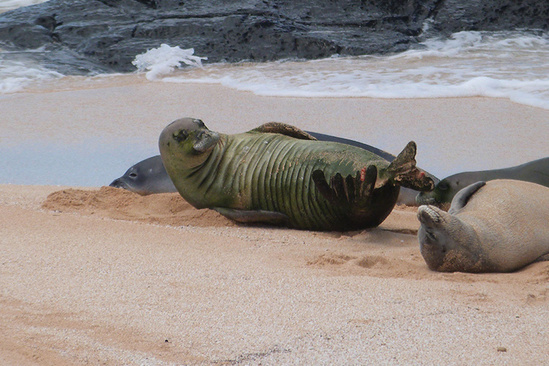 Notable Facts: First seen as a juvenile on Ni‘ihau in 2014 with a wounded eye, which had to be surgically removed.

There are tales of a sleek gray sea "dog" with one eye that traverses the rugged coastlines of Ni‘ihau in search of ocean treasures. A crafty soul that appears suddenly from the depths and disappears just as silently and quickly. Runku the one-eyed is one to watch for. If your paths cross and you feel the gaze from her single eye falling on you, beware…

…you might be too close and cause a disturbance, so admire this monk seal from a distance!

And welcome to the October (Halloween) edition of Monk Seal of the Month! 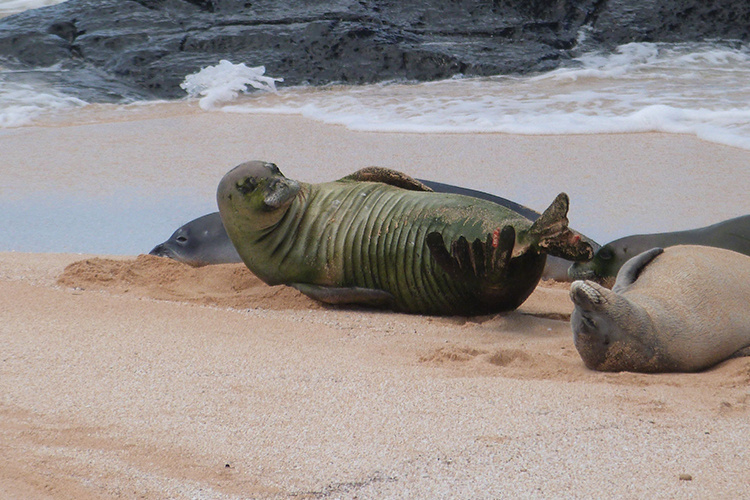 Adult female monk seal Runku (R1KU) lounges on a remote beach with two other monk seals. Runku is alive today thanks to the help by NOAA and their committed partners.

Our story this month really does focus on a one-eyed sea dog but she didn’t start out that way. The tale begins in January 2014 when NOAA received word from Ni‘ihau Ranch that there was a seal on the island that was missing an eye and in dire straits. A few members of our team flew over to examine the seal and determine the best course of action.

Arriving on site, the team found a juvenile female seal that did indeed have an eye problem. Our team veterinarian, Michelle Barbieri, noted that the seal’s right eye was damaged and moderately swollen, but the injury seemed restricted to the eyeball itself and there was no evidence of a foreign object. The injury appeared to have occurred in the previous 2–3 days.

In cases like this, our program is presented with an important decision. Is it best to take the animal into captivity for medical care and accept all the risks that come with that? Or do we simply observe and put our trust in the impressive capacity of wild animals to heal themselves?

We have observed several one-eyed seals in the wild so we knew it was possible this young female could make it on her own. Her behavior was normal, she moved well, and she was in good condition. She was in a well-protected area with sandy beach and tide pools — an excellent place for recovery — and the residents of Ni‘ihau offered to check on her progress every few days.

We elected for the conservative route. We gave her an injection of long-acting antibiotics to treat potential eye infections and continued to monitor her. We also applied plastic tags to the seal’s rear flippers so that it would be easier to recognize her in the future. Based on her tags, this seal formally became known as R1KU.

About a month later, R1KU appeared on Kaua‘i. Her injured eye had not healed and she had lost weight — we knew it was time to bring her in for care. On February 24, 2014, our long-time partners at the US Coast Guard provided a monk seal air ambulance, flying the patient from Kaua‘i to NOAA’s new facilities on Ford Island, O‘ahu. There, our team began a formal assessment, consisting of a physical exam and careful observation.

R1KU has an excellent appetite. She is alert, ambulatory, very strong, resistant to restraint (quite a handful!), and is passing feces. She has acclimated to the pool very well and is not showing any signs of stress. Physical examination and bloodwork confirmed that her biggest issue is likely the traumatic wound to the right eye, along with dehydration and thin body condition (weight 45 kg). We will begin developing a treatment plan for the eye tomorrow, as I want to seek some additional input and balance what is necessary and what is realistic (given her strength), while considering that we should be as hands-off as possible. At this time, I am hopeful that she will not require an invasive procedure but rather can be managed medically and with supportive care. 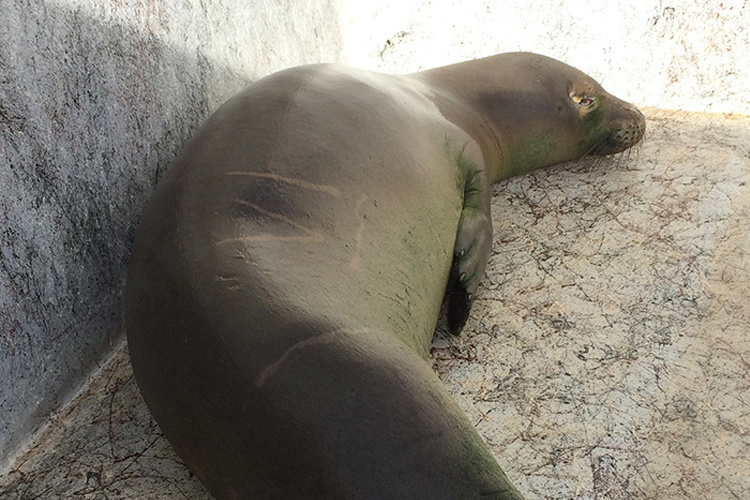 Runku in her holding pen prior to surgery. In this photo you can see some of the of the damage and swelling around her right eye. The eye would eventually need to be removed.

Our success in treating monk seals is greatly enhanced by access to many skilled specialists who are willing to lend us their expertise at the drop of a hat. In this case, it was Dr. Carmen Colitz, one of the world’s premiere experts on marine mammal eye issues. After a thorough consultation with Dr. Colitz, it became clear that non-invasive care was not an option. R1KU would need surgery to remove her damaged eye, a procedure called enucleation.

A surgery like this wouldn’t normally require a specialist. But given the importance of each female monk seal and our desire to ensure R1KU received the best possible care, we enlisted the help of Dr. Miles Yoshioka, a veterinary surgeon on O‘ahu.

The surgery went smoothly. Later that day, R1KU was resting comfortably back in her holding pen at NOAA and under close observation. The next 24–48 hours would be an important time in her recovery, with our next goal being to get her to eat as soon as possible. 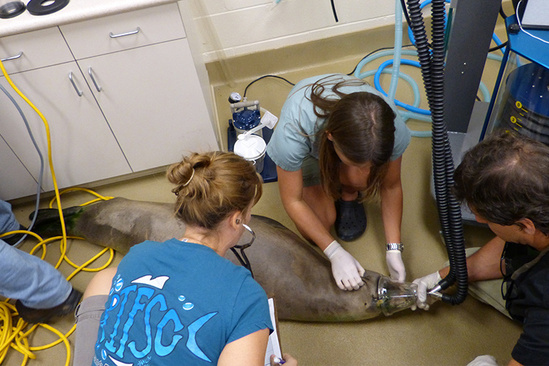 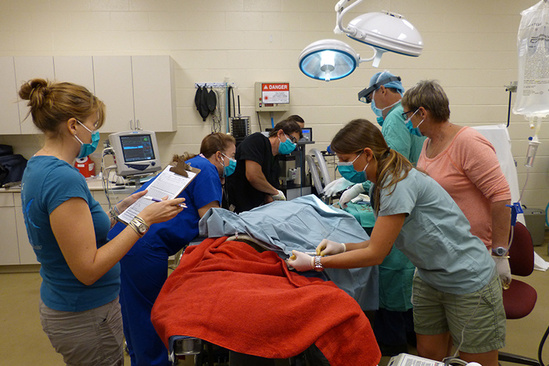 Thankfully, we did not have to wait long. The following day, R1KU, whose scientific identifier had morphed into the informal moniker "Runku," was more than willing to eat her breakfast of herring. And then her lunch.

It was a very positive turn but we still needed to be cautious. There could still be complications from the surgery and we now had a new concern: keeping Runku "wild." Now that we were feeding and caring for her, it was critical to reduce our interactions with Runku to the greatest extent possible so that she would not approach humans for food once she was released. Feedings required our staff to be silent ninjas, getting the fish into her holding pen without being seen. Basically, we created the illusion that fish appeared from the sky.

After 5 days in dry holding to allow for healing (we can’t exactly put a pirate’s eyepatch on a seal!), Runku was released into one of NOAA’s large rehabilitation pools, giving her a chance to stretch her flippers after 2 weeks in our care. It was, no doubt, a relief for her, but it also gave us a chance to make sure her eye was healing well and could withstand any exertions while swimming. Our hope was to get Runku back to the wild as soon as we could. 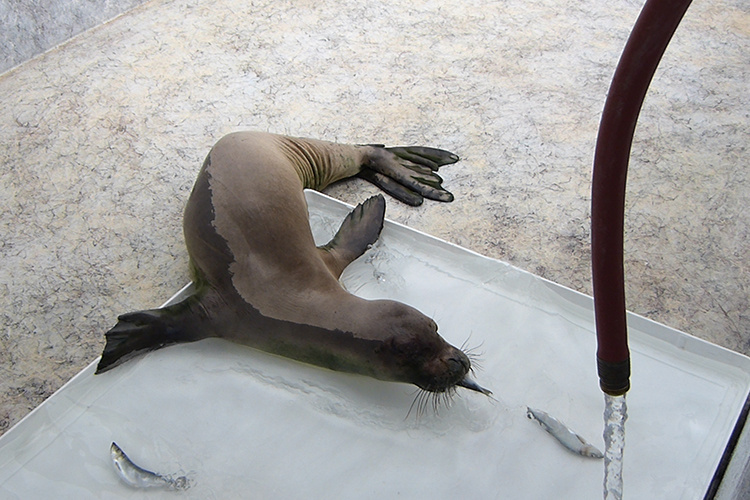 Shortly after surgery Runku is offered herring to help speed her recovery. Runku ate without hesitation,
a hopeful sign for a quick release back to the wild.

After a few additional days, Runku appeared well on her way to healing. Veterinarians gave her a clean bill of health, but there was one last test she had to pass before we could sign her release papers: She had to catch live fish.

To test this, we released some live moi (Pacific threadfin) into Runku’s pool. Once the fish had settled in, Runku was allowed to enter. We monitored her ability to catch the fish to make sure the loss of an eye wouldn’t hurt her chances of survival in the wild. The answer was immediate: After several zigs and zags, Runku ate her first fish and moments later, her second. She was going to be fine.

R1KU, or Runku as she's known, is a juvenile Hawaiian monk seal that was brought in for care after being found with an eye injury. The injury required her eye to be removed, and Runku was rehabilitated for 2 weeks prior to being released. Before Runku could be released, NOAA researchers needed to ensure that she could still successfully capture food and survive in the wild.

On March 14, after less than 3 weeks in captivity, Runku was airlifted back to Kaua‘i by the US Coast Guard. She was then transported by private helicopter to Ni‘ihau and released near the site where she had been first observed two months earlier. With a brand-new scar representing her resiliency and a satellite transmitter that helped us keep watch over her, she entered the water and swam down the coast.

While we're always ecstatic when we release a seal back to the wild, the joy is tempered by the knowledge that release is only one milestone. The more important measure of success is that the animal survives long-term, maintains all its wild behaviors, and, for a female, starts to have pups of her own. It has been more than 3 years since we released Runku and so far, this one-eyed pirate seal is doing great. She has been seen at least once every year since we released her and she is always in good condition and not interested in people.

This year she gave us quite a surprise. In May, our team surveyed Ni‘ihau on its way up to deploy our summer monk seal research and recovery camps in the Northwestern Hawaiian Islands. Despite surveying Ni‘ihau’s entire coastline, there was no sign of Runku. Having sailed to Nihoa Island overnight, the team went ashore and soon spotted a chubby gray seal with a familiar permanent wink.

Our pirate seal had been traveling the high seas and landed 140 miles from her usual home. However, it was only a brief excursion, as three months later she was spotted again on Ni‘ihau, just a stone’s throw from where this adventure began. Runku has demonstrated her ability to thrive despite her reduced eyesight. We estimate Runku is about 5 years old, which means she could start having pirate babies of her own any time now.